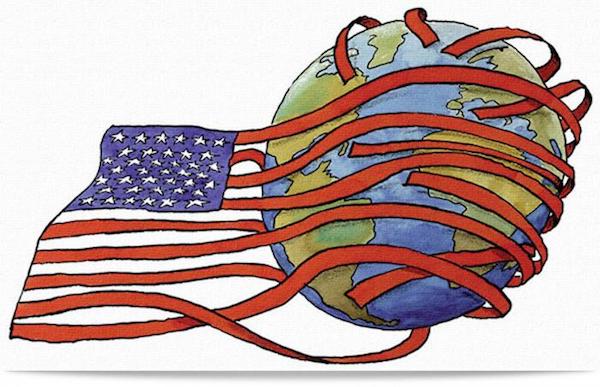 Can the United States achieve its current goals to dominate Latin America and the Caribbean with a doctrine based on principles from the 19th century?

Although many of us would like to answer this question with a resounding “No!” and insist that our region is well prepared to defend itself against the 1823 pretensions of President James Monroe, with his “America for Americans” -which must be understood as “America for the United States”- it would be a serious mistake to underestimate the risks.

There are at least two conditions that must be met, if the U.S. is to advance its objectives.

The first is keeping Latin American and Caribbean countries divided, aggravating their differences, and convincing them that individual progress inevitably means the weakening of neighboring nations.

This was how the U.S. strengthened regional oligarchies and helped frustrate Bolivarian plans to create a great union of nations. Almost two centuries later, the techniques used are not much different in U.S. efforts to dismantle integrationist mechanisms like the Bolivarian Alliance for the Peoples of Our America (ALBA), the Union of South American Nations (Unasur), Mercosur (the Common Market of the South), and the Community of Latin American and Caribbean States (CELAC).

The second condition is imposing a theory based on fear, so Washington appears to be the only state capable of guaranteeing security and tranquility in the region.

If in Monroe’s era the enemies were the old European colonial powers, now talk focuses on terrorism, Russian interference, and China’s economic competition. In all cases, U.S. hegemony and intervention in the domestic affairs of other countries are sold as “lesser evils,” given threats from elsewhere.

This was how the occupations of Cuba and Puerto Rico, and constant U.S. interventions in Central America in the beginning of the 20th century, were justified. Later, containing Communism was the excuse used for attacks on the Cuban Revolution, support of military dictatorships, and counterinsurgency plans that left tens of thousands of people dead or disappeared.

The disintegration of the socialist camp and the Soviet Union did not prevent Washington from targeting progressive governments that emerged in the final decades of the past century, which in a short period of time changed the face of Latin America and the Caribbean.

Advances were made in the nationalization of natural resources, the reduction of poverty, and the search for ways to develop complementarity among national economies. Created were ALBA, UNASUR, and finally, most ambitiously, CELAC.

“Unity within diversity,” was recognized as one of CELAC’s basic principles: Everyone need not share the same social project, to benefit from integration.

During these years, in a parallel process, China became one of Latin America’s most important socio-economic partners, purchasing a large portion of its raw materials from the region and investing billions of dollars in the development of new industries to manufacture products with greater added value.

The brief period when unquestioned U.S. predominance reigned, after the fall of the Soviet Union, gave way to the emergence of important actors in the region, including BRICS countries (Brazil, Russia, India, China and South Africa). In Latin America and the Caribbean, consciousness grew that no country, not even the largest, could face, the political, economic, and environmental challenges of the 21st century, on their own.

Likewise, regional pressure was one of the reasons President Barack Obama recognized the failure of his country’s policy toward Cuba, and moved toward normalization of relations between Washington and Havana.

Although this administration never, for even a second, abandoned its strategic objectives of domination, Obama was obliged to change methods and address not only Cuban leaders more respectfully, but all those across the continent.

In a speech to the Organization of American States (OAS), in November of 2013, then Secretary of State John Kerry stated that the era of the Monroe Doctrine was “over,” and that his country aspired to a relationship of “equals” in the region. His words were not a moral epiphany, but rather a simple recognition that the political environment had changed.

In any event, his comments contrast sharply with those of his Republican successor, Rex Tillerson, who proclaimed the full relevance of the Monroe Doctrine, prior to a recent tour of several Latin American and Caribbean countries, during which he redoubled attacks on the Bolivarian Revolution in Venezuela.

Beyond the differences in methods, strengthening U.S. hegemony in Latin America and the Caribbean is a national security objective of the United States that transcends any party differences, or scandals surrounding the White House.

Tillerson’s words came not only from the Trump administration – which conducted an election campaign based on an anti-immigrant discourse and disrespect for several countries south of U.S. borders – but also reflected a change in the way the United States perceives the relationship of forces in an area it still considers its “backyard.”

Republicans have reaped the rewards of the silent war Obama waged against progressive governments in Argentina and Brazil. They have likewise redoubled the attacks on Venezuela, which the previous President had already declared an “unusual and extraordinary threat to the national security and foreign policy of the United States.”

Methods can change, but the objective remains the same: eliminate an example of resistance. This is the Bolivarian Revolution’s original sin, as is was for Cuba, which 60 years later is still being punished with the blockade.

The 8th Summit of the Americas, in Lima, Peru, is on the horizon, where the U.S. strategy will once again consist of promoting division, by trying to prevent the participation of Venezuela.

“Some appear to have forgotten the lessons of the past,” warned Army General

Raúl Castro in his speech at the 15th Ordinary Summit of ALBA, after noting that Washington is again “underestimating our peoples.”

What is at risk is that the wishes of James Monroe could come true, and the independence and unity of Latin America and the Caribbean postponed another 200 years.

THE MONROE DOCTRINE IN ACTION

1846: Mexico loses half of its territory as the result of a U.S. invasion.

1898: The United States intervenes in the Spanish-Cuban War, and annexes Puerto Rico, Guam, the Philippines, and Hawaii. Later, in 1901, Cuba is forced to include the Platt Amendment in its Constitution, guaranteeing the United States’ right to intervene in the country’s internal affairs whenever it sees fit.

1903: Washington promotes the independence of Panama from Colombia, to negotiate an agreement on the construction of the inter-ocean canal on better terms. Panamanians were obliged to wait almost another century to recover sovereignty over this part of their territory.

1910: The first occupation of Nicaragua, repeated several times in subsequent years, facing the heroic resistance of the barefoot army of Augusto César Sandino.

1954: The CIA orchestrates the overthrow of the democratically elected Jacobo Árbenz government in Guatemala.

1959: A dirty war begins to defeat the Cuban Revolution, one which continues to date.

1973: The U.S. supports and aids the organization of a coup against Salvador Allende in Chile. An era of military dictatorships takes hold across the region, backed and advised by Washington.