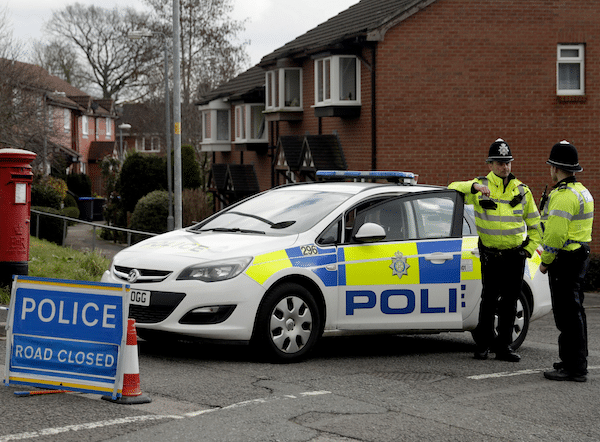 Russian officials are voicing a full-throated dismissal of British accusations that Russia used a nerve agent referred to as “Novichok” in an attack on former Russian spy Sergei Skripal and his daughter Yulia. The Russian Ambassador to the U.K., Alexander Yakovenko, is further charging London with making accusations in poor faith, while raising questions over whether the poison was already in the possession of the British government.

Speaking to reporters at the Russian Embassy, Yakovenko urged British citizens and European nations to “[not] take the words of the British for granted,” adding:

The U.K. has a bad record of violating international law and misleading the international community, which includes invading Yugoslavia (78 days of bombardment), Iraq, and Libya under false pretexts, and supporting the coup d’état in Ukraine. I would like to quote President Ronald Reagan, who frequently referred to the Russian proverb ‘trust but verify.’

History shows that British statements must be verified.

The comments come as Skripal and his daughter remain in critical condition following their mysterious collapse from apparent poisoning after a visit to a pub in Salisbury on March 4. New reports suggest that the former spy was exposed to the gas through his BMW car’s air vents.

The incident set off a furious series of tit-for-tat accusations; a McCarthy-style witch-hunt against critics of Prime Minister Theresa May, such as Labour leader Jeremy Corbyn; and some of the most aggressive rhetoric between London and Moscow since the collapse of the Soviet Union. Police officers wear protective suits inside the fence of “Ashley Wood Recovery”, a vehicle recovery business in Salisbury, England, Tuesday, March 13, 2018. The use of Russian-developed nerve agent Novichok to poison ex-spy Sergei Skripal and his daughter makes it “highly likely” that Russia was involved, British Prime Minister Theresa May said Monday. Novichok refers to a class of nerve agents developed in the Soviet Union near the end of the Cold War. (AP Photo/Matt Dunham)

Deploying the typically dry irony of Russia’s diplomatic corps, the Russian ambassador questioned the haste with which Britain found Moscow culpable for the poisoning, noting that “this case is so complicated, we need, let’s say, some wisdom of a person like Poirot to investigate,” referring to the popular and long-running British mystery series based on a fictional detective created by Agatha Christie.

He added that experts from the Organization for the Prohibition of Chemical Weapons (OPCW) should look into how the British were able to designate Russia as the origin of the A-234 nerve agent used in the attack, which has been dubbed “Novichok” and is said to be 10 times stronger than VX gas. Official statements from Scotland Yard noted that the investigation could take weeks, or even months before conclusions could be arrived at.

Yakovenko went on to ask:

Could it mean that it is highly likely that the British authorities already had this nerve agent in their chemical laboratory in Porton Down, which is the largest secret military facility in the U.K. that has been dealing with chemical weapons? Is it a coincidence that this chemical weapons facility is only eight miles away from the site of the incident? How did doctors decide what antidotes to administer to the victims?”

In an interview with AFP, Russian chemist and emigrant to the United States Vil Mirzayanov explained how he was convinced that Russian security forces carried out the attack on Skripal. The 83-year-old had revealed the existence of the class of nerve agents to which Novichok belongs in his 2007 book, State Secrets.

“Only the Russians” developed Novichok, Mirzayanov said, adding that “they kept it and are still keeping it in secrecy.”

However, the chemist admitted, someone could well have used the formulas in his book to make the chemical weapon.

Yakovenko has dismissed the nerve agent’s link to Russia, stating that the term “Novichok” – which means “novice” in the Russian language – is a “bizarre” term for the substance that his country wouldn’t have used, and that the rush by British authorities to attach the name to the agent reveals “a clear attempt to … quite artificially link the incident to Russia.”

Moscow joined the Chemical Weapon Convention in 1997, and by 2017 its chemical weapon production facilities and chemical munitions were scrapped in their entirety. Like other countries, including the United States, Russia continues to practice its legal right to maintain a very small amount of chemical weapon agents for testing purposes. Britain has asked the OPCW to investigate the alleged existence of the Novichok program.

The remark drew a sharp response from various Russian officials, with Yakovenko calling the charge an “insult [to] the Russian people, who defeated Nazism and lost more than 25 million people [in the Second World War]… that goes beyond common sense.”

Earlier this week, 23 Russian diplomats and their families boarded a plane and departed for Moscow after being expelled by the British government. Prime Minister May has stated that her officials “are actively considering and stand ready to deploy at any time” further measures against Russia.