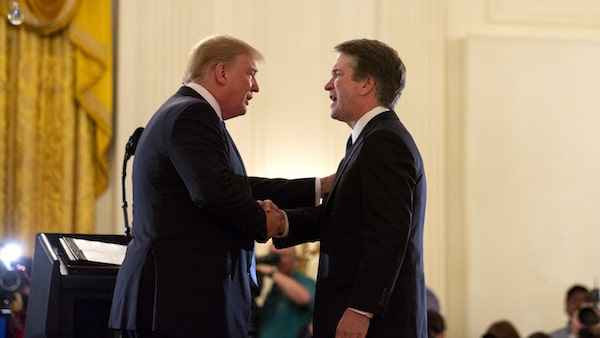 President Donald Trump’s choice Monday night to nominate Judge Brett Kavanaugh as his second Supreme Court nominee has confirmed that Trump seems dead-set on fortifying conservative control of the court for years, if not decades, to come.

The 53-year-old Kavanaugh has served on the District of Columbia Court of Appeals for 12 years, and his ideological stances are firmly on the right end of the Washington spectrum. He is widely expected to be confirmed, given that the Republican Party commands a slight majority in the U.S. Senate. If his appointment clears that hurdle, it would mark the second successful lifetime appointment to the court by Trump in 18 months.

Trump’s Supreme Court Justice nominee, Judge Kavanaugh, represents a direct and fundamental threat to the rights and health care of hundreds of millions of Americans. I will oppose his nomination to the Supreme Court. #SCOTUSpick

He earned his stripes in Washington taking part in the investigation of President Bill Clinton during the Monica Lewinsky scandal of the 1990s, where he served under independent counsel Kenneth Starr and drafted much of the Starr Report, paving the way to Clinton’s impeachment. He also took part in the Florida recount battle in the 2000 presidential election as a counsel in George W. Bush’s team and later as a senior Bush White House official.

Kavanaugh, if confirmed, will replace Justice Anthony Kennedy, 81, who retired late last month. If the nominee fills the outgoing conservative’s justice’s seat, experts fear that he may move the court further to the right–especially on issues relating to corporate regulations, immigrant rights, gun laws, women’s reproductive health, and religious-based discrimination against LGBTQ people.

Given that he was on the shortlist of nominees drawn up by Leonard Leo, the conservative Federalist Society’s executive vice president, one can assume that the judge will hold down the fort in terms of right-wing rulings if he proceeds to the top bench. The other potential figures under consideration had been federal appellate judges Thomas Hardiman, Raymond Kethledge and Amy Coney Barrett.

According to Axios, Kavanaugh would rank as the second most far-right justice on the court if he were confirmed, placing him slightly to the left of Justice Clarence Thomas and to the right of Trump’s first nominee, Neil Gorsuch.

A quick run-down of his positions on various social issues shows Kavanaugh as a party-line Republican holding down the far-right flank of conservative traditionalism (or social backwardness), posing the danger that his appointment would sound the death-knell for everything from the Department of Labor to the Environmental Protection Agency and even Roe v. Wade :

Corporate regulations – the 53-year old put significant wind in the sails of the banking industry when he wrote an opinion in October 2016 declaring the Consumer Financial Protection Bureau “unconstitutional” due to the “enormous executive power” given to its director and the “threat to individual liberty” it poses (for billionaire banksters). The watchdog agency was established by the 2010 Dodd-Frank Wall Street Reform and Consumer Protection Act following the 2008 financial collapse and was later found to be constitutional.

He has also sided with the meat industry, opposing Department of Agriculture standards requiring that meat be labeled to allow consumers to know where each step of the meat production process took place. Kavanaugh backed Big Food by arguing that the government must support U.S. manufacturers, industrial farmers and ranchers versus foreign competitors.

There’s a lot to dislike about Brett Kavanaugh’s record – including his hostility toward consumers. He argued that the @CFPB – which has returned $12 billion to people who were cheated – is unconstitutional. The rights of consumers: that’s #WhatsAtStake. https://t.co/1lpHYdQ86M

Racial Equity – Kavanaugh is an opponent of affirmative action in college admissions, which has sought to increase the representation of historically oppressed nationalities and ethnicities in education since the 1960s. Since its inception, affirmative action has been the focus of attacks by right-wing forces in the U.S. who claim that it is an example of so-called “reverse racism”–a term alleging the victimization of whites by historically oppressed nationalities–and bars qualified white candidates from school placement, instead favoring their counterparts of color whom they perceived to be less qualified.

Workers Rights – The conservative justice has a solidly anti-worker record, and has opposed everything from protections of collective bargaining rights to basic workplace safety standards.

Judge Kavanaugh routinely rules against working families, regularly rejects the right of employees to receive employer-provided health care in the workplace, too often sides with employers in denying employees relief from discrimination in the workplace and promotes overturning well-established U.S. Supreme Court precedent.”

The Environment – Kavanaugh was a major critic of Obama-era environmental protection agencies, and penned a decision rejecting attempts by the EPA to curb air pollution that spills over states’ borders. In the face of federal attempts to curb pollution and climate change, he has upheld corporate interests and the separation of powers.

Reproductive Health, Contraception and Abortion – He has argued that the Affordable Care Act’s coverage of contraception infringes on the “rights” of religious–read: evangelical fundamentalist–organizations and “religious liberty” groups. However, he has pledged in the past to uphold the 1973 Roe v. Wade ruling legalizing abortion access. Democrats are skeptical about his commitment to the decision, and Senate Democratic Leader Chuck Schumer has indicated that the party will be on the lookout for signs that he will repeal Roe.

If you are a young woman in America, pay attention to Brett Kavanaugh’s nomination. What’s at stake is a woman’s right to make her own decisions about her body and her future.

This will forever change your life. Pay attention.

Kavanaugh was the focus of a partisan battle when Bush nominated him to the appeals court in 2003, with Democrats accusing him of being a partisan ideologue. By 2006, the Senate confirmed him.

The narrow Republican Senate majority of 51-49—with Sen. John McCain sitting out proceedings and basically standing at death’s door in Arizona–leaves Democrats with little options to wage their storied “resistance,” yet they can possibly apply pressure to Republican figures to create dissension and defections in GOP ranks.

“Resistance” on Capitol Hill and In the Streets

According to the White House, attempts by Trump’s team to reach out to Senate Judiciary Committee members prior to Monday’s nomination were largely greeted courteously–with the notable exception of Democratic California Senator Kamala Harris, whose office told White House Counsel Don McGahn, “We want nothing to do with you.”

In a tweet, the former California attorney general and centrist Democrat–widely considered to be a possible Democratic presidential candidate–wrote that Kavanaugh “represents a direct and fundamental threat to the rights and health care of hundreds of millions of Americans.”

Trump’s Supreme Court Justice nominee, Judge Kavanaugh, represents a direct and fundamental threat to the rights and health care of hundreds of millions of Americans. I will oppose his nomination to the Supreme Court. #SCOTUSpick

On Tuesday morning, Schumer also vowed on MSNBC to “oppose this nominee with everything that I’ve got.” Democrats are banking on the fear surrounding Trump’s Supreme Court pick and its anti-woman, white supremacist, and pro-corporate implications as a powerful motivator for voters, particularly Democrats, in this year’s midterm elections.

Despite the fear that Kavanaugh will turn the Supreme Court far to the right, some experts feel that the perception it was somehow ever “moderate” or even “progressive” was a false illusion and that a hard-right tilt by the Judiciary could clear up false expectations about the nature of the court.

“When people in [the U.S.] worry about the court tilting ‘hard-right’ it makes it seem as if the court has ever been a ‘left’ court,” National Lawyers Guild vice president Ken Montenegro told MintPress News.

“[But] the court has largely been centrist…So, it’s possible that in this time of emboldened white supremacy a tilt further to the right will mobilize people to question the [overall] nature of the judiciary,” he added.