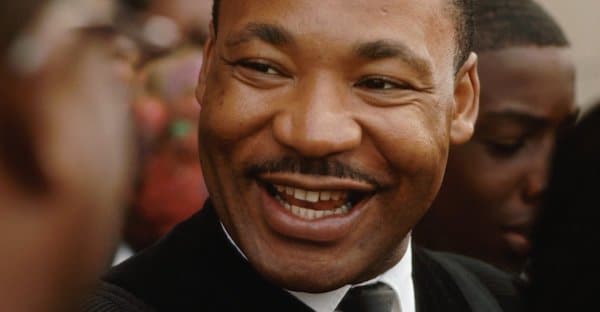 “There is no reason to believe that Dr. King would have abandoned his pro-peace (and “democratic socialist”) principles if he were alive today.”

The line of preachers stretched 100 yards to the door of Columbus, Georgia’s radio station WOKS, where the pastors had each been allotted a few minutes to testify to their deep commitment to the ideals espoused by Dr. Martin Luther King, Jr., shot down in Memphis three days earlier. Nearly every Black minister in town was there, waiting his turn to lie. Although they would sound like an amen corner for “the Movement” on this mournful Sunday morning, the assembled clergymen had, in fact, acted as the front line of resistance to King’s gospel of nonviolent confrontation with the white powers-that-be.

Both before and after the tumultuous Birmingham campaign of 1963, Dr. King and his Southern Christian Leadership Conference (SCLC) had hoped to bring the movement to Columbus, the second-largest city in Georgia, 100 miles due south of Atlanta. The protocols of Black Baptist behaviour, however, required that ministers first receive an invitation from a local congregation before setting up shop in someone else’s city. All 100 of Columbus’ Black churches shut their doors on Dr. King, rejecting any outside interference in their long accommodation with white supremacy.

“Dr. King’s early southern campaign itinerary was shaped primarily by the places he was locked out of.”

The same solid phalanx of Jim Crowed preachers kept King out of Georgia’s other large cities: Macon, Augusta, and Savannah. Indeed, Dr. King’s early southern campaign itinerary was shaped primarily by the places he was locked out of–ultimately, almost everywhere except small backwaters like Albany, Georgia and St. Augustine Florida.

The myth of the “Black Church” as the central player in the huge social transformations of the 1960s begins with the false testimonials that poured from pulpits and Black radio microphones on that Sunday, April 7th, 1968 — and have soiled the historical record ever since. Accommodation with Power–not transformation or liberation–was the watchword of the Black church, then as now. King and his SCLC were a rogue faction of dissident Baptists in a sea of petty capitalist hustlers in clerical collars whose mission was to reconcile Black people to life under apartheid.

“Accommodation with Power was the watchword of the Black church.”

I watched with disgust as the Uncle Tom preachers composed their mini-sermons for the radio microphone. An 18 year-old paratrooper with the 82nd Airborne Division, stationed at Fort Bragg, North Carolina, I had been on field exercises with my unit the week before, providing security for the commanding general’s headquarters. Under a big tent, company commanders and their executive officers spent that Wednesday, April 3, pouring over maps of Washington, DC, in the event we had to occupy the city. When King was killed on the evening of the next day, the division hastily packed its gear and moved back to barracks to prepare for deployment to burning cities. The general, however, somehow forgot to restrict all 12,000 of us to base. Some of us took advantage of the oversight, and went home for the weekend.

When I and hundreds of other paratroopers straggled back to Fort Bragg early Monday morning, April 8, the rest of my unit was sitting on an airfield near Baltimore, as the brass tried to decide whether we should be deployed in that city or nearby Washington. Both were burning, along with over 100 other cities. We wound up in the nation’s capital.

“The Guardsmen behaved like an Army of White Vengeance.”

The year before, Newark, New Jersey, had been occupied by nearly lily-white units of the National Guard, sent there to quell a four-day rebellion in which 26 Blacks were killed. The Guardsmen behaved like an Army of White Vengeance, joining the racist cops in savaging Black people and shooting up businesses displaying “Black-owned” and “Soul Brother” signs on the Springfield Avenue thoroughfare. However, the 82nd Airborne Division was a different social organism, entirely; our ranks were 60 percent Black, and we had been transformed. All of us (at least in my company) were aware of what had happened in Newark. As far as the Black troops were concerned, our division had only one mission in Washington, DC: to make sure the white soldiers–especially the mostly white military police–did no harm to the Black population. And they did not dare. Not one Black citizen of Washington was hurt by a soldier of the 82nd Airborne division–or, to my knowledge, even verbally abused–during the occupation.

Our officers took note, and were clearly disturbed by our protective postures. The same Black ghetto army that was rebelling in Vietnam, was showing that it would not be a party to abuse of Black people at home. It was the beginning of the end of the draft.

“Not one Black citizen of Washington was hurt by a soldier of the 82nd Airborne division during the occupation.”

Dr. King’s April 4, 1967, anti-war speech at New York’s Riverside Church likely began the countdown to his assassination. A year later, as the fires of Black rage at King’s murder burned in the nation’s capital, it was dawning on the top brass that the entire institutional structure of the U.S. Armed Forces had to be scrapped. Not only was the genocidal U.S. imperial project in Vietnam doomed, but there must never again be allowed to arise a critical mass of Black ghetto soldiers to dominate the ranks of combat units–men that fought pitched gun battles with military police outfits in Da Nang and other posts, burned down the military stockades at Long Bihn and Da Nang, and fragged (blew up with grenades) countless officers and sargeants. (See “Fear of a ‘Black Street Army,’” The Black Commentator, July 3 2003, and “No Draft No Peace: Rangel and Conyers Are Right” July 9, 2003, The Black Commentator.)

The Pentagon is the biggest booster of the all-volunteer Army, which allows it to socially engineer its globe-straddling foreign legions, now heavily weighted with whites from “Nowhereville, USA.” The 80,000 strong Joint Special Operations Command — the cutting edge of the imperial war machine, almost as large as the entire French army – is overwhelmingly white.

Excellent for imperialism. Although Blacks still make up about a fifth of the U.S. military, they are now clustered in support units, rather than combat line positions. My old paratroop division, the 82nd Airborne, is now the whitest unit in the Army — the better to project the power of white capital to all corners of the world.

The week that began with the murder of fervently anti-war Dr. Martin Luther King is but a snapshot in time. Yet there is no reason to believe that Dr. King would have abandoned his pro-peace (and “democratic socialist”) principles if he were alive today, at age 89. King was a student of Gandhi and Marx long before he led his first demonstration.

The same social forces prevail as during MLK’s time. The Democrats are still a wing of the Greater War Party, nowadays screaming louder than the Republicans for confrontation with nuclear Russia. The Black Misleadership Class was already emerging in much its current, self-serving form when King was alive. The first Black big city mayor, Cleveland’s Carl Stokes, elected in 1967, appointed Black Air Force general Daniel “Chappie” James Public Safety Director. The General promptly issued “dum-dum” hollow point bullets to the cops. Maynard Jackson, elected mayor of King’s beloved Atlanta in 1973, fired the mostly Black sanitation workforce carrying signs proclaiming, as in Memphis 1968, “I Am a Man.” And, Republicans are still the White Man’s Party, the identity they were busily crafting in 1968, through President Nixon’s “Southern Strategy.”

Why would MLK “mellow,” when the villains are arrayed in much the same way as before — the only difference being that a Black man, Barack Obama, has joined the U.S. pantheon of super-predator, million-plus killers.