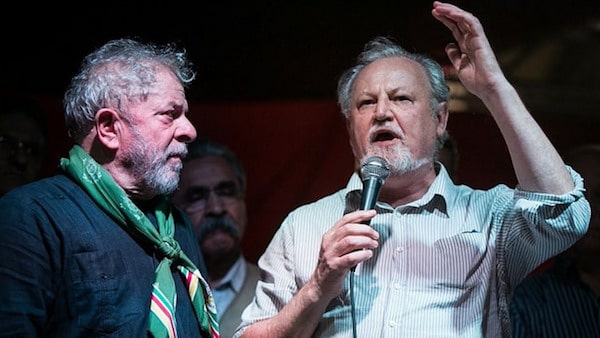 João Pedro Stédile, from the National Coordination of Brazil’s Landless Workers’ Movement (MST), issued a public statement on Thursday calling on the Brazilian people to take the streets in order to express outrage over the verdict and decision to arrest former Brazilian President Luiz Inácio Lula da Silva.

“He [Lula] is innocent. He did not commit any crimes. This is just another chapter in the ongoing coup, which began with the impeachment of Dilma Rousseff. Now the powerful elite are hoping to prevent Lula from running for president,” Stédile stated.

Stedile’s criticisms coincide with swaths of the Brazilian public who have serious concerns about the biased nature of the Brazilian judicial system. Institutions and individuals across the political spectrum have questioned the legitimacy of the legal proceedings against Lula da Silva.

Tomorrow [Friday] must be a day of national indignation. We must occupy the squares, streets, public buildings. We need people to go out and express their outrage regarding this decision. We may not control the TV networks but we have the internet. The unions must engage in strikes and show the the bourgeoisie elite that without our labor there is no wealth, they cannot keep on exploiting us.

In Stedile’s public statement, which was widely circulated across the internet, he condemned TV Globo, which is Brazil’s largest media conglomerate. He accused the corporation as being complicit in the recent Supreme Court ruling and acting in accordance with the interests of the Brazilian elite.

The Globo network, which is owned and controlled by the Marinho family, has been repeatedly accused of forming a prejudicial alliance with members of the Car Wash task force to prosecute the former president.

A recent study carried out by the Instituto Paraná Pesquisas, a market research firm, 42.7 percent of Brazilians agree that Lula is being persecuted by the media and the judiciary in an effort to remove him from the 2018 presidential race.

It has been documented that Estado de São Paulo, commonly referred to as Estadão, alongside O Globo, supported the military coup in 1964.

During his statement, Stedile went on to identify and criticize the corporate beneficiaries that seek to prevent Lula from participating in the upcoming presidential elections.

“Following the impeachment of Dilma Rousseff, they [Brazilian elite] immediately implemented a series of political, social and economic policies that generated unemployment, inequality and worsened the conditions of the working class,” Stedile added.

Lula supporters are expected to carry out demonstrations on Friday that will likely continue over the weekend. Planned protests will likely occur along Paulista Avenue near the São Paulo Museum of Art, in Rio de Janeiro, along the Esplanade of the Ministries in Brasília, and in the northeastern cities of Recife and Salvador.