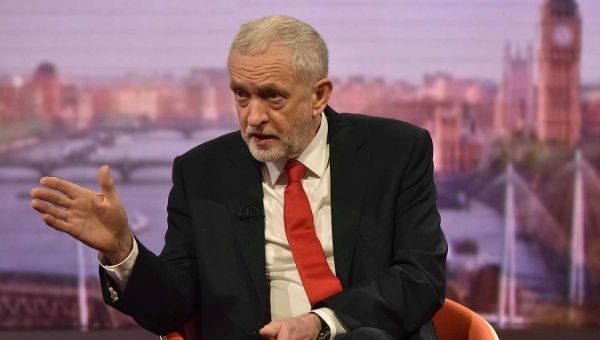 After questioning the joint U.S., U.K. and French airstrikes against Syrian government structures, British opposition leader Jeremy Corbyn said he will push for a “war powers act” that would require the British government to seek approval from parliament for any future military actions.

In an interview with the BBC Sunday, Corbyn, the leader of the Labour Party in the United Kingdom, reiterated his argument that the U.K. strikes lacked legal basis and an authorization from the United Nations.

“The legal basis would have to be self-defence, or the authority of the UN security council. Humanitarian intervention is a legally debatable concept at the present time,” Corbyn said.

I think parliament should have a say in this, and the prime minister could quite easily have done that…What we need in this country is something more robust, like a war powers act, so that governments do get held to account by parliament for what they do in our name.

His comments come after the United States, United Kingdom and France fired early Saturday over 100 missiles into Syria according to the Syrian government, Russia and the U.S. military. The Syrian army said that more than 70 missiles of the 105 fired at its structures were intercepted by its air defenses.

Corbyn sent a letter to British Prime Minister Theresa May Saturday criticizing her decision to join the coordinated unilateral attack before international inspectors even had the chance to begin their probe into the alleged chemical attack by the Syrian government.

“It is now vitally important that the OPCW inspectors, who are due to arrive in Douma today, are allowed to do their work and publish their report into their findings – and report to the United Nations Security Council,” he said in his letter to the prime minister.

He further called on May to assure the country and lawmakers that no further action will be taken against Syria and that international inspectors “be allowed to complete their inspections without hindrance.”

Protests took place Saturday and Sunday in the United States, India and other countries by leftists organizations and anti-war activists who rejected the attack and called for the end of western intervention in Syria.

The United Nations Security Council rejected Saturday a resolution proposed by Russia seeking to condemn the U.S.-led attack in Syria. Only Russia, Bolivia and China voted in favor of the resolution.

Meanwhile global chemical weapons watchdog OPCW inspectors arrived in Syria Saturday and were due to try to reach the site of a suspected poison attack in the Syrian town of Douma in eastern Ghouta.

Syria’s deputy foreign minister Faisal Mekdad met with them Sunday as they prepared to begin their fact finding mission after a request by the Syrian government last week.