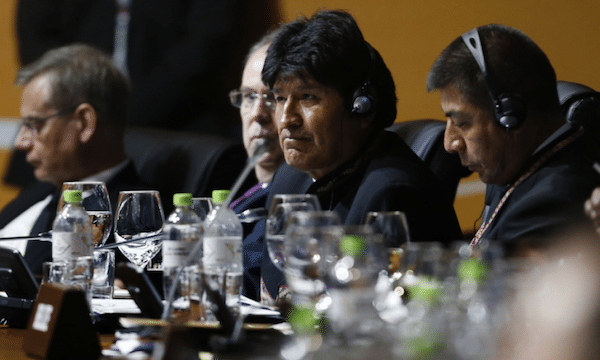 “We warn about the false fight against corruption that they’re using to topple democratically elected governments and projects for change,” Mr. Morales told the Democratic Governance Against Corruption summit.

He said it would be “superficial” and an “inappropriate use of public money” to meet for a “false struggle” against corruption, breaking with the speeches of the presidents of Peru and Argentina had who spoken before him.

President Morales also defended former Brazilian president Luiz Inacio “Lula” da Silva, who was recently jailed for 12 years on corruption charges despite a lack of evidence and strong opposition from the public.

“The world must know that the people’s consciousness can’t be imprisoned,” he declared.

Pointing out that capitalism, transnational corporations and speculation are the main reasons for corruption, since their only objective is to accumulate wealth, the Bolivian leader added: “If you don’t democratise and turn institutions like the IMF into servants of the public good instead of instruments of submission, nothing said here will be enough.”

He argued that the summit had to confront its biggest challenge, to dismantle “the same system in which corruption flourishes, the capitalist system,” which he called “the worst enemy for humanity and the planet.”

I reject these insulting references to Cuba and Venezuela.

The U.S. vice president then walked out of the conference.

President Maduro told a Caracas rally that the Peru summit had been a “complete failure,” having read “reports of some empty speeches by right-wing, unpopular, murderous, imperialist lackey presidents.”

Mr. Maduro’s invitation to the summit was rescinded earlier this year by Peru’s president Pedro Pablo Kuczynski who, embarrassingly, has since been replaced after being forced to resign amid a sprawling corruption scandal.