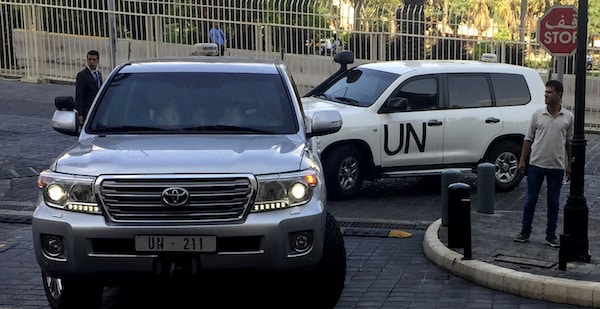 United Nations vehicles carry the team of the Organization for the Prohibition of Chemical Weapons (OPCW), arrive at hotel hours after the U.S., France and Britian launched an attack on Syrian facilities to punish President Bashar Assad for suspected chemical attack against civilians, in Damascus, Syria, Saturday, April 14, 2018. A team of the international chemical weapons watchdog arrived in the Syrian capital Damascus to carry out an investigation into the alleged chemical weapons attack on the town of Douma where opposition activist said more than forty people were killed. (AP Photo/Bassem Mroue)

According to corporate media reports as well as reports from some “independent” media outlets like Democracy Now over the past week, UN-backed investigators from the Organization for the Prohibition of Chemical Weapons (OPCW) were being “blocked”  by Syria and Russia from reaching the alleged site of a chemical weapons attack in Douma, Syria that ostensibly triggered the recent bombing of Syria by the U.S., U.K. and France.

The Syrian and the Russian officials who participated in the preparatory meetings in Damascus have informed the [investigators] that there were still pending security issues to be worked out before any deployment could take place.

Later in the week, the OPCW declined to place blame on the governments of Russia and Syria, as had been alleged–stating that it was “unable to share operational details about this deployment.” The statement, issued by the OPCW’s press service, continued:

This policy exists to preserve the integrity of the investigatory process and its results as well as to ensure the safety and security of OPCW experts and personnel involved. All parties are asked to respect the confidentiality parameters required for a rigorous and unimpeded investigation.

However, it since emerged that it was actually the UNDSS, or the UN’s Department of Safety and Security, that was blocking the team of investigators from reaching the site–not Syria and Russia. Speculation had mounted that it was the UNDSS leadership, under pressure from the governments involved in last week’s bombing of Syria, who were working to prevent the investigation from moving forward.

Those concerns centered on the current leader of the UNDSS, Peter Drennan, who has long served in the Australian Federal Police, an Australian law enforcement agency similar to the U.S.’ FBI. Given Australia’s close ties to and subservient attitude toward the U.S. and U.K., as well as its vocal support for the strike, some analysts alleged that the UNDSS leader has acted to a protect his nation’s closest allies.

Furthermore, while the UNDSS delayed the OPCW investigators, several Western journalists gained access to the site over the past week without being impeded by the Syrian government or reports of gunfire. Those journalists, including respected reporters like Robert Fisk, have found no public proof that a chemical weapons attack took place.

After being stalled most of the past week as the UNDSS had cited “safety concerns” and had offered no timetable regarding when the inspectors will be allowed into the site, the Russian military stepped in to offer protection to the investigators, escorting them to access to the site late Friday evening. Thus, claims that Russia and Syria–who invited the OPCW to investigate in the first place–were blocking the investigators was proven to be false as the Russian military ultimately allowed the investigators to offer the protection to the group given the UNDSS’ failure to do so.

The Russian military’s decision to escort investigators came after the Russian Deputy Foreign Minister Mikhail Bogdanov to stated on Thursday–in response to the UNDSS’ claims–that “Someone does not want an objective professional investigation [to be carried out].”

The U.S., for its part, has long been anticipating that the OPCW may not go its way and has been claiming–without evidence–that Russia and Syria are attempting to “sanitize” and meddle with the site of the alleged chemical weapons attack in an attempt to “cover up” evidence. The accusations are strange given that chlorine gas–which is said to have been the chemical weapon used–evaporates and leaves no unique traces in dead bodies. Despite that, and given that the inspectors have now gained access to the site, these accusations are likely to continue.

These events seem to suggest that the OPCW and its attempts to investigate in Douma are being politicized in order to prevent backlash against the three countries that bombed Syria before an investigation could take place. If true, it would certainly not be the first time that the chemical-weapons watchdog has been pressured by Western governments in recent years.

Whose blood? The difficulties of verifying the authenticity of evidence

Last April, Syria was similarly accused of launching a chemical weapons attack in the town of Khan Sheikhoun in the Idlib province, a province largely controlled by al-Nusra Front fighters and other terrorist-aligned rebel factions. The outcry led the OPCW to launch an investigation into the alleged attack.

Even though the OPCW had previously confirmed that the Assad government had no chemical weapons, as all were destroyed under UN and OPCW supervision in 2013, the OPCW eventually released an update on its investigation into the Idlib incident, stating it had found “incontrovertible” proof that sarin had been used in the attack.

The group’s finding was released after receiving biomedical samples allegedly from the victims and survivors of the attack. At the time, OPCW’s Director-General Üzümcü stated:

The results of these analyses from four OPCW-designated laboratories indicate exposure to sarin or a sarin-like substance. While further details of the laboratory analyses will follow, the analytical results already obtained are incontrovertible.

The press release noted that interviews, evidence management and sample acquisition related to the investigation were ongoing.

However, the OPCW never visited the site of the alleged incident and based its findings solely on the samples that the organization received–not from the Syrian government–but from the French and U.K. governments, both of which have been vocal opponents of Syrian President Bashar al-Assad and have been actively arming and funding rebel groups to oust him. Those governments claimed to have obtained blood samples from victims that were later provided to the OPCW. Neither government elaborated on how these samples were obtained or if they were received through an intermediary.

At the time, Russia immediately questioned the OPCW’s swift conclusion, noting that the organization had failed to act with such speed when opposition groups–including Jaysh al-Islam—have stood accused of chemical weapons use. In addition, independent experts who analyzed the attack, such as MIT professor and chemical weapons expert Theodore Postol, have provided substantial evidence that sarin was not used in the incident and that the attack itself was staged.

Despite the OPCW’s claims to have found “incontrovertible” proof of the Syrian government’s use of sarin in 2017, U.S. Secretary of Defense James Mattis stated in February that the U.S. has never had proof that Syria had used sarin gas—calling the OPCW’s own claims regarding the alleged chemical weapons attack in Idlib into question, as the U.S. government apparently did not consider such claims credible.

More recently, further evidence pointing to the OPCW’s tendency to cave under Western government pressure was revealed in relation to the watchdog’s investigation into the case involving the poisoning of Sergei Skripal, an ex-Russian spy, and his daughter Yulia, who were living in the U.K. U.K. authorities immediately blamed Russia for the poisoning and stated that the Soviet-era Novichok nerve agent was used against them. The U.K. expelled several Russian diplomats as a result of the incident, even though a full investigation had not yet taken place.

As part of that investigation, the OPCW received samples of the alleged nerve agent, which was widely claimed to have been Novichok, from the U.K. government and subsequently sent those samples to an independent Swiss chemical lab for analysis. That lab found that Sergei Skirpal and his daughter Yulia had not been poisoned by Novichok, but rather by 3-Quinuclidinyl benzilate or BZ, a toxin that has never been produced in Russia and is instead produced in the U.S., U.K. and other NATO-aligned states. [To date, this claim about the existence of BZ has neither been confirmed nor denied by the Swiss lab. —Eds.] This finding essentially proves that the U.K.’s claim that the poison used was produced only in Russia to be completely false.

However, upon receiving these results, the OPCW only confirmed the formula of the substance that poisoned the Skirpals and failed to mention any of the other findings noted in the Swiss lab’s report. The OPCW, to date, has offered no comment as to why it failed to include the full findings of the Swiss lab in its full report.

Given the OPCW’s past bias in favor of Western governments, the results of their investigation should be subject to scrutiny. However, the fact that even pro-rebel outlets often used in mainstream Syria reporting have stated that no attack took place and the fact that the U.S. seems to be preparing for an unfavorable outcome of any OPCW investigation, suggests that–this time–efforts are being made by Western governments to discredit the investigation by blaming Russia and Syria for allegedly “meddling” with the evidence. Logically, those efforts can only reflect fear that a negative result would bring the pretext for the recent bombing of Syria crashing down.

Update: This story was updated on Saturday to reflect new information regarding the arrival of OPCW investigator into Douma under Russian military protection