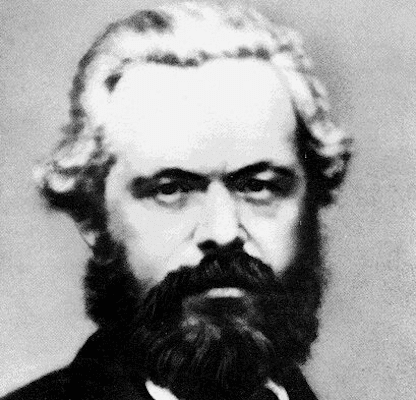 Two hundred years have passed since the birth of Karl Marx. Few historical figures of any kind have been so influential ‑ surely no thinker has. Yet many now would dismiss his ideas as outdated, as flawed, as tending towards totalitarianism. Why should we remember him?  What can we possibly learn from him now?

Marx was born on May 5th, 1818. He grew up in a middle class family of assimilated Jews in the city of Trier, in the Rhineland, close to the border with Luxembourg. His background was one of comfort and culture, with a premium placed on education. His father, a reader of Voltaire and Kant, was a secular liberal, involved in the campaign for Prussia to become a constitutional monarchy.

Young Karl went to Bonn University in 1836, to study law. His enthusiasm for extra-curricular activities caused his father to force a transfer after a year to Berlin. There, though continuing his study of law, he developed an intense interest in the regnant Hegelian philosophy (the master having died only in 1831), and he became close to a group of Hegel’s legatees, the “Young Hegelians”, led by Ludwig Feuerbach and Bruno Bauer, who retained Hegel’s dialectical method while rejecting metaphysics.

Marx’s doctoral thesis, on Epicurean philosophy, was submitted at the University of Jena in 1841. He was keen to embark on an academic career, but the prevailing political atmosphere was hostile to liberal causes and to the atheism of which Marx was an advocate. He planned a new journal with Bauer, but it never reached publication. Bauer and Marx enjoyed a riotous trip to Bonn, where they drank, misbehaved in church and hurtled around the city on donkeys.

Marx started writing for various newspapers, and he should be remembered now as one of the greatest journalists the world has seen. In 1843, he moved to Paris and there in 1844 he met Friedrich Engels, his most important supporter and intellectual interlocutor. At this time he began his studies in political economy (Smith, Ricardo, Mill) and he encountered French socialism and anarchism as represented by Saint-Simon, Fourier and Proudhon. Combined with his background in German idealist philosophy, Hegel in particular, the traditions which fed into “Marxism” or historical materialism were being put into place.

The works flowed, both theoretical and political: the “Paris manuscripts” (only published in 1932) where the concept of alienated labour is worked out; The German Ideology, co-written with Engels, where they break decisively with the Young Hegelians and define historical materialism for the first time; the Manifesto of the Communist Party, surely one of the most brilliant and important political pamphlets ever written. The Manifesto was written for the Communist League, the first international communist organisation.

In the wake of the revolutions of 1848, Marx took refuge in London, where he lived for the rest of his life. Often financially supported by Engels at this time, he wrote for the New York Tribune, a fine liberal newspaper with a wide working-class readership, throughout the 1850s. In 1864 he and Engels helped found the International Workingmen’s Association, later known as the First International. In 1867, Marx published the first volume of his masterpiece, Capital, an extraordinary amalgam of history, political theory, economic analysis and polemic, written with his customary verve and gusto. He spent the rest of his life working on the manuscripts of Volumes II and III.

Any notion of Marx (or Engels) as cobwebbed fusty old greybeards, which one might have picked up from the posters of them used for the Soviet May Day parades of the 1970s and 1980s, is immediately swept away by the briefest examination of their lives. Both men worked at a tremendous pace, combining journalism, scholarship and revolutionary activity in a storm of movement, exile and passion. In his youth, in a famous letter to Arnold Ruge, Marx, reflecting on the contemporary German political and intellectual scene, memorably called for “a ruthless criticism of everything existing”. That white-hot energy, that “relentless erudition” (Foucault’s wonderful phrase), that commitment to change – these traits form the basis for the reasons why we should still read Marx, and why we should read him now.

When a system – political, economic, cultural – breaks down, we get an opportunity to see how it worked. The global economic and financial crisis which broke in 2008 was one such opportunity. Among its many striking effects was the movement of the term “capitalism” from the periphery of public discussion to the very centre. At least since the 1970s, merely to use such a term had marked a speaker or writer as a “Marxist”. Not any more. Capitalism, a system which manages most of the time to hide its systematicity, swims into clear view as it teeters dangerously. Its limitations, contradictions, inequities, and tendency towards self-destruction as well as to renewal all become obvious. The most important single reason for reading Marx in 2018 is that his critique of capitalism remains unmatched in its reach and sophistication. Certainly the economy has changed since the 1860s – the change to service industries in the West, digitisation, the Internet, financialisation, the rise of the multinational corporation ‑ all are features of modern capitalism which Marx did not anticipate. But Marx did not claim to be a prophet – though many of his enemies suggest he did. He did not offer a clear projection of how capitalism would mutate. He wisely avoided predicting what a communist society would look like.

Nor was he a determinist, economic or otherwise. Of course, the economic level of society is crucial to human survival. But Marx was hardly the first or the only thinker to take that into account. Nor did he argue that the capitalist economy would develop along the lines of predetermined and ascertainable laws. When he and Engels declared in the Manifesto that all history had been the history of class struggle, they were not suggesting, in some cyclopean manner, that every arena of social struggle or contest can be reduced to the economic level. They were arguing though that struggle for control of society’s goods was the greatest single engine of social change. That change might be progressive or reactionary: the question came down to politics and the balance of social and political forces in a given society at a given time. As Marx famously put the matter in The Eighteenth Brumaire of Louis Bonaparte,

This is Marx’s nuanced portrayal of historical agency – we have some degree of autonomy now but our freedom is also restricted by the free action of our forebears, just as actions we take in the present will mould those of our descendants – for good and for ill.

Marx and his ideas are often dismissed as leading to Stalinism and the gulag. This is an astonishingly ignorant and unhistorical view to take. In his writing and his career, Marx was visibly and explicitly hostile to the established authorities of the day, and nothing in his writings on politics or economics presages the command economy created in Russia during the effort to make “socialism in one country” under Stalin in the 1920s and 1930s. If the efforts of Lenin, Trotsky and the Bolsheviks ran into trouble shockingly soon after the revolution of November 1917, this was due to many factors – not merely the influence of Marx. Russia in 1917 was an extraordinary and shambolic mix of feudal imperium, emerging industrial giant, and swollen bureaucracy. Most of its population consisted of illiterate peasants. It contained elements of “traditional” and “modern” society in the most spectacular and jagged juxtaposition. A Marxist revolution aimed at a socialist society was always going to struggle in such a situation, and struggle it did: civil war, invasion by multiple foreign powers, famine, economic and military collapse. For the great historian Isaac Deutscher, the situation in Russia “meant that the first and so far the only attempt to build socialism would have to be undertaken in the worst possible conditions, without the advantages of an intensive international division of labour, without the fertilising influence of old and complex cultural traditions, in an environment of such staggering material and cultural poverty, primitiveness and crudity as would tend to mar or warp the very striving for socialism”.

In any case Marx himself was hostile to rigid dogma and a trenchant critic of arbitrary authority. He believed in the values of free speech, democratic accountability and he berated the German Social Democrats of his own time for their state-worship. He argued that common ownership of land should be a voluntary innovation, not a state-driven top-down policy. Marx would have been horrified by Stalinism. And we need to remember that Stalinism’s most potent critics have not been “liberals”, but in fact figures of libertarian or Trotskyist socialism – such as Deutscher.

Another charge against Marx and Marxism is that they are obsessed with an outdated social category: class. In a society such as Ireland, where the Left has mostly been weak and quiescent, and which did not undergo an industrial revolution on anything like the scale of Britain or Germany, the most important political markers have often been ethnicity and religion. This has produced the notion that Ireland is a classless society. But – again – the briefest serious examination of contemporary Irish society (or contemporary society everywhere) reveals its deep structuration in class terms. One has only to look at the differential resources, incomes, educational attainments and eventual careers of children from Sandymount or Howth, as compared to children from Jobstown or Sallynoggin, to realise that Irish society is riven in class terms, and that most of our great institutions – of education, culture, politics, healthcare, civil society – do not merely reflect this class division but help to reproduce it. Class may be more complex and varied than it was in Marx’s day, but it remains a more important social category than ever – even in the age of “identity politics”, which stresses a person’s gendered or racial self-understanding.

In a world where the logic of the market suffuses almost every zone of human life and activity – not only work but culture, politics, education, health, the functioning of the state – the Marxist analysis of the commodity as fetish – as an object we create which then seems to take on a value and identity of its own to the extent that it can act against us – has more pertinence than ever. The brilliant American political theorist Wendy Brown demonstrates this in her book Undoing the Demos: Neoliberalism’s Stealth Revolution, showing how the very notion of reason itself has been colonised by commodification and the means-ends logic of the market, with devastating consequences for the idea of the political itself.

There can be no doubt that Marx’s life and ideas represent a rich and continuously relevant resource for us in our present dilemmas, to enable us, in his words, both to interpret the world and to change it. It is in this light that a major international conference is being held at Maynooth University, Co. Kildare on May 4th and 5th next: The Re-Birth of Marxism: Haunting the Future. May 5th will mark 200 years since Marx’s birth and we have assembled a rich collection of scholars and activists to explore his legacy and imagine our future.  Prominent among them will be Antonio Negri and Jodi Dean, two of the most creative and remarkable political thinkers alive today. Topics to be considered will include social movements, the after-effects of the Celtic Tiger economy, Marxism and the women’s movement, Marx’s and Engels’s interest in Ireland, Marxist traditions in the Global South, the art and writing of William Morris, and many more.  Everyone is welcome and concessionary rates for students and the unwaged will be available.