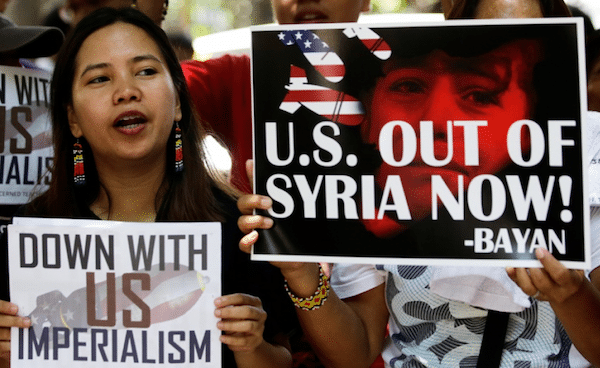 A demonstration against the US air raids on Syria in the Philippines. China’s report states that the US has committed acts of aggression against Syria four times in recent months

THE U.S. has been accused of human rights abuses, serious infringements of its citizens’ rights and “systematic racial discrimination” in a damning report released by China.

The Human Rights Record of the United States in 2017, which uses official U.S. government statistics and other publicly available sources, highlighted the poor U.S. human rights record at home and abroad.

The report claims that the situation in the U.S. worsened in 2017, with results showing that Washington is in no position to play the role of a global “human rights judge.”

However Beijing warned that such “biased reports” were a failed attempt to interfere with the country’s internal affairs and China’s development. Foreign Ministry spokesman Lu Kang said that it is the Chinese who have the best say on domestic human rights.

China’s scathing report slammed the U.S. for its military interventions in Syria which have led to the bombings of civilian infrastructure, including at least 12 schools, 15 mosques, 15 bridges and a refugee camp.

It said the U.S. had attacked Syrian government forces at least four times in recent months, violating the UN charter in a war of aggression.

And it hit out at the growing disparity between rich and poor in the U.S. where a record 40 million people are living in poverty.

It warned that, despite a promise by former U.S. president Barack Obama, the notorious Guantanamo Bay remains open, with people held for decades without charge and subjected to torture.

A flawed U.S. democracy allows a super-rich minority to use their wealth to buy their way to power, exemplified by the election of billionaire businessman Donald Trump as U.S. president.

“U.S. money politics keeps fermenting and the rich guide the direction of politics. The weak face increasingly harsh restrictions on voting and scandals involving politicians are frequent,” the report concludes.