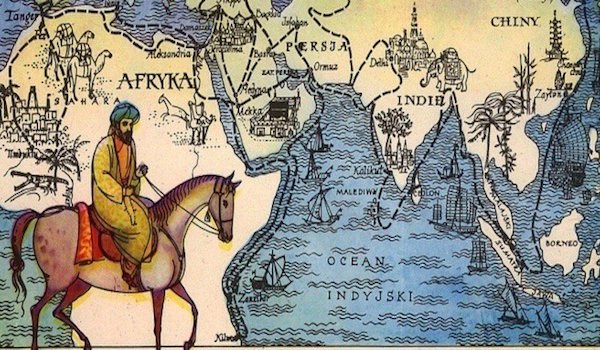 “The encroachments of European traders, missionaries, explorers, planters, soldiers, and especially scholars and teachers, represented not civilization but rather, its antithesis.”

The preceding map of the world by fourteenth-century North African scholar ibn Battuta pictures the world as travelers came to know it at the break of the early modern epoch. Reading ibn Battuta’s travelogues, I am reminded afresh of the inter-civilizational unity of Pan Africa and Pan Asia in antiquity and modernity, and the violent severing of these deep ties of civilization and kinship amongst our peoples by European slavery and colonialism. The inquiries of K.M. Panikkar, Martin Bernal, Frank Snowden, and D.D Kosambi have further elucidated the rich history of trade and civilization between Africa and Asia in first millennium of the common era, in antiquity, and indeed, pre-history. We now know that renaissance of civilization in Europe in the fifteenth century would have been impossible without the invasions of Africa, the Americas, and Asia by Europeans much as the Industrial Revolution would have been impossible without the labor of the black worker in the Americas.

W.E.B Du Bois was the first to chart these waters in his social scientific investigations, which not only yielded a new method for conducting scientific inquiry, but also set out theses towards a new philosophy of history, one that recognized the full weight of the contribution that African peoples have made to world history and the historical continuities that persist between Asiatic and African civilizations. Du Bois also sets out to develop an aesthetic philosophy and literary practice capable of advancing humanity’s liberation from the twin turpitudes of whiteness and capitalism. But I will save this discussion for another time. As Du Bois confirms in his 1946 monograph, The World and Africa,

The connection between Asia and Africa has always been close. There was probably actual land connection in prehistoric times and the black race appears in both continents in the earliest records, making it doubtful which continent is the point of origin (176).

“In the eyes of the darker races of the world, Europeans had lost all moral authority as leaders of humanity.”

In his lifetime, Western civilization was on the verge of a profound crisis. All over the world—from Russia to China to India to Ghana to African America—the working masses sought to rid their countries of the curse of imperial tyranny, which manifested for the darker races, as white civilization itself. For them, the encroachments of European traders, missionaries, explorers, planters, soldiers, and especially scholars and teachers, represented not civilization but rather, its antithesis. It is worth remembering that Du Bois wrote The World and Africa in the shadow of the Second World War, when Western Europe lay in shambles, riven by the rabid greed of empire, a crisis which came to bitter fruit in the two world wars that commenced the twentieth century. In the eyes of the darker races of the world, Europeans had lost all moral authority as leaders of humanity, given that they could not recognize the humanity of their dark brothers and sisters, who collectively constituted the demographic majority of the world. By claiming independence from the white man’s rule, the dark nations of the world thus recognized that the problem of the color line began with the problem of white folk and their incapability of contending with the true nature of their role in human history as it has taken shape in the past four hundred years.

“The poor white worker of the American South joined forces with the white planter against the general strike organized and led by black workers.”

It is this foundational lie of whiteness that James Baldwin takes to task in his two-part essay, The Fire Next Time, wherein he argued that white people suffered from the deepest and most tragic of psychoses: an inability to truly love humanity. It is for this reason, Du Bois also pointed out in his book, Black Reconstruction in America, that the poor white worker of the American South joined forces with the white planter against the general strike organized and led by black workers. It behooves us to ask with Du Bois and Baldwin why this pattern of human behavior and culture continues to persist and how it has contributed to the present demise of racially oppressed nations. Du Bois began with the understanding that the central contradiction of modern history—the problem of the color line—was born out of Europe’s exploitation of the dark proletariat, an enterprise founded in rape, slavery, avarice, and gluttony. Thus, the origins of the labor struggle for the darker races do not lie in the French Revolution’s quest for liberty, equality, and fraternity. Rather, it comes to germinate in the their own struggles for freedom from European civilization.

“The central contradiction of modern history—the problem of the color line—was born out of Europe’s exploitation of the dark proletariat.”

Civilization encompasses the totality of a life world. It is constituted by the religion, government, literature, language, art music, architecture, sports, philosophy, science and cosmology of a people. Du Bois said that “Civilization not only could be shared by the vast majority of men, but such civilization founded on a wide human base would be better and more enduring than anything that the world has seen. The world would thus escape the enduring danger of being run by a selfish few for their own advantage.” We have long been taught the Europeans represent the most advanced ranks of humanity. This could not be further from the case if we look at the bloody record of Western civilization and the utter selfishness and narcissism with which white folk have proceeded. Since its emergence as an idea, Europe has always been at war with itself and with the world. Before the Berlin conference of the nineteenth century, there was the struggle over the Asiento—who had the right to sell slaves in Spain’s colonies from 1543-1834, a right over which European countries like England, France, Portugal, and the Netherlands fought each other tooth and nail.

You will say that it is not easy to understand what civilisation means, and you will be right. It is a very difficult question. Fine buildings, fine pictures and books and everything that is beautiful are certainly signs of civilisation. But an even better sign is a fine man who is unselfish and works with others for the good of all. To work together is better than to work singly, and to work together for the common good is the best of all.

“Since its emergence as an idea, Europe has always been at war with itself and with the world.”

Nehru reminds us that the primary function of a revolutionary civilization is to fashion new human beings, revolutionary human beings who push themselves to take on the great and grave burden of building a revolutionary civilization, the New Jerusalem, a kingdom of heaven on earth, in the words of Baldwin, where black humanity is free to pursue its most profound ambitions. Artists must play a key role in our common ascendance to the concrete nature of the problems—and possibilities—that lie before us. The indomitable Paul Robeson insisted that his work as an artist was never separate from his development as a human being. Similarly, Baldwin contended that it was the artist’s moral responsibility to bear witness to human suffering and confront its true cause. Both Robeson and Baldwin thus recognized that the true cause of black folks’ socioeconomic depression lay in the rapacious interests of white folks who partitioned the modern world for European plunder. Artists must shift the masses away from individualism and chauvinism and in their place, remind humanity that we are wrapped in a single garment of destiny, as Dr. King put it. It is thus important to impress upon importance of unity, for in the rebirth of our civilization, there is no place for selfishness and envy. These moral states are deterrents to building unity in struggle: they cloud our judgment, making us more likely to be thrown off course. Du Bois speaks to a similar sentiment in his “Talented Tenth Address,”

When I came out of college into the world of work, I realized that it was quite possible that my plan of training a talented tenth might put in control and power, a group of selfish, self-indulgent, well-to-do men, whose basic interest in solving the Negro problem was personal; personal freedom and unhampered enjoyment and use of the world, without any real care, or certainly no arousing care, as to what became of the mass of American Negroes, or of the mass of any people. My Talented Tenth, I could see, might result in a sort of interracial free-for-all, with the devil taking the hindmost and the foremost taking anything they could lay hands on.

“My plan of training a talented tenth might put in control and power, a group of selfish, self-indulgent, well-to-do men.”

Like Marx, Du Bois argues that the afflictions of society could only be cured if we voluntarily take up the planned production of goods and just distribution of income. However, unlike Marx, Du Bois was inescapably aware of the problem of the color line, which he saw as the definitive problem of the twentieth century and the modern epoch. In Black Reconstruction, he offers copious evidence affirming the ill-understood truth that the revolutionary government led by the black working class that emerged in the United States Of America in the decades following the American Civil War was systematically repressed by the alliance that formed between poor and wealthy whites who united against black folk in the interests of preserving white supremacy. As such, he saw racial prejudice as the fundamental obstacle to building a movement for socialism in America.

And it was with this aim that he organized. Du Bois did not merely interpret the world; he strove to change it. He understood, like other world leaders, that adopting a planned economy coordinated by an educated and trained leadership would concretely address and transform social problems such as poverty, ignorance and illness, and universalize the comforts enjoyed by the elite under capitalism to all. In this new world, civilization would not merely be for the rich but for all levels of society. The upper-class would not be the exception, but the rule among humankind. Like Marx, who was born fifty years before Du Bois, Du Bois averred that the world was not for the few, but for the many; that out of the teeming masses of men could come an overwhelming capacity of ability and genius, “if we freed men by plan and not by rare chance.”

R. Divya Nair is an artist, writer, editor, and educator who is currently completing her doctorate in literary studies. She organizes with The Saturday Free School in Philadelphia, which is currently leading a year-long, city-wide campaign to read W.E.B Du Bois’s works and return to his political practice with fresh eyes.