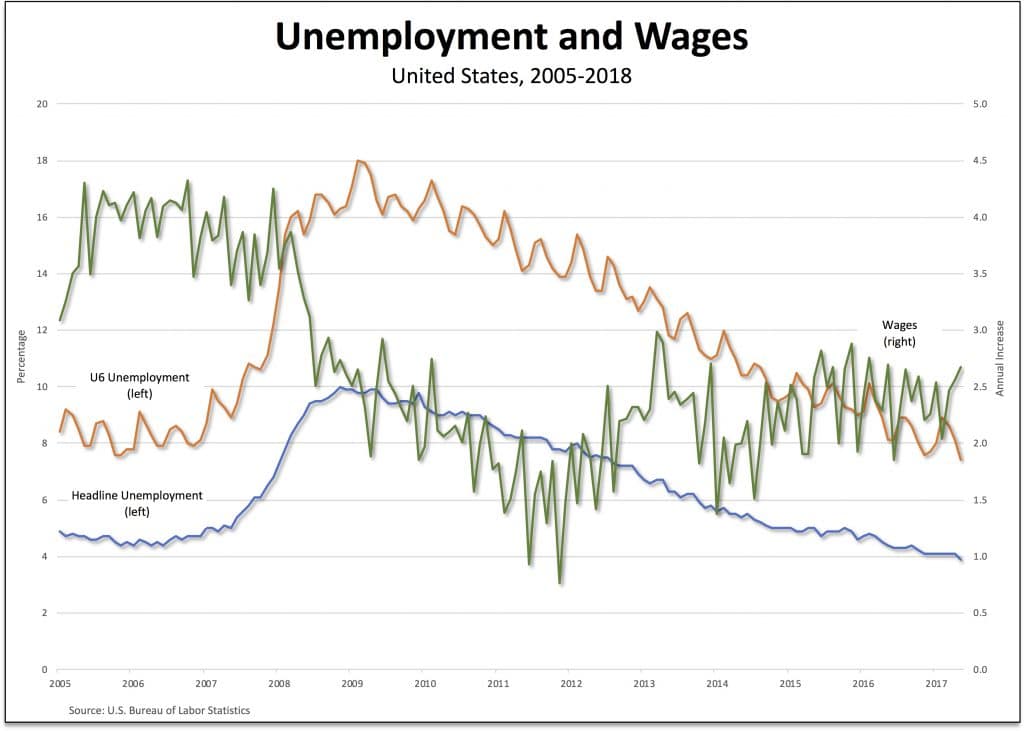 Does anyone really need any additional evidence of the lopsided nature of the current recovery?

Employers certainly don’t. They’re managing to hire additional workers, thus lowering the unemployment rate. But they don’t have to pay the workers they hire much more than they were getting before, with wages barely staying ahead of the rate of inflation. As a result, corporate profits continue to grow.

Clearly, what we’re seeing remains a one-sided recovery: employers are getting ahead—and their workers are still being left behind.

According to the latest report from the Bureau of Labor Statistics, total nonfarm payroll employment increased by 164,000 in April, thus reducing the headline unemployment rate to 3.9 percent and the expanded or U6 unemployment rate (which includes, in addition, marginally attached workers and those who are working part-time for economic reasons) to 7.4 percent.* Meanwhile, average hourly earnings of private-sector production and nonsupervisory employees increased by only 5 cents in April—an annual rate of just 2.7 percent (just a bit more than the current inflation rate of 2.5 percent).

Sure, employers complain that they can’t hire the workers they need—persistent gripes that are dutifully reported in the business press. They may even be paying one-time bonuses. But they’re certainly not increasing wages in order to attract the kinds of workers they say they want.

That’s because they don’t have to. Most of the new jobs are being created in sectors—like professional and technical services (an additional 25.8 thousand jobs in April), temporary help services (10.3 thousand), health care (24.4 thousand), machinery (8.4 thousand), and accommodation and food services (18.9 thousand)—where there are plenty of still-underemployed workers to go around. In addition, most of those workers are not represented by unions, and therefore aren’t in a position to negotiate for higher wages.** The decline in government jobs means there’s little competition for the nation’s workers. And employers continue to have the option of automation and offshoring, which also keeps workers’ wages in check.

So, employers in the United States are able to advertise jobs that pay $10, $12, or $20 an hour, which desperate workers are forced to have the freedom to take—because, within the existing set of economic institutions, the alternatives are even worse.

American employers, with their higher profits and new tax cuts, could be paying higher wages. But they’re choosing not to.***

For them, it’s certainly been a beautiful recovery.

*After revisions, job gains in the United States have averaged 208,000 over the last 3 months.

**However, one group of workers without union representation—teachers—have decided to initiate strikes and other work stoppages to respond to cuts in their wages and education budgets. As North Caroline kindergarten teacher Kristin Beller explained, “We are done being the frog that is being boiled.”

***Except, of course, the portion of the surplus they have been distributing to their CEOs.