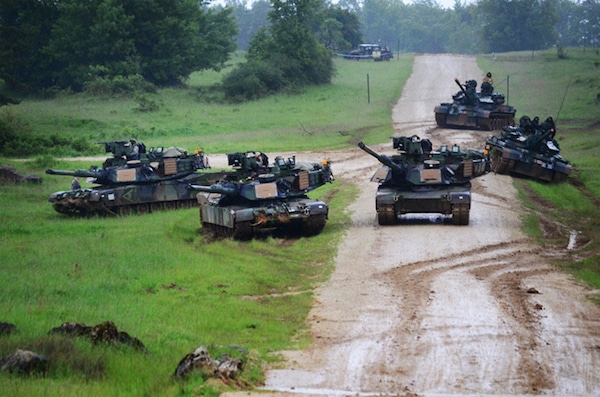 One of the most outstanding features of a truly standing-out Trump Presidency to date is how precisely the actual policy developments, when we clear away the deliberate smoke and mirrors of tweets and scandal, follow a basic strategy of Washington geopolitics going back to at least 1992. This is the case in the latest unfortunate and quite illegal unilateral decision to leave the Iran nuclear agreement. This is also the case in the relentless Cold War-style demonization campaign against Russia and the deployment of insidious new sanctions. This is also the case with the looming trade war the Trump Administration has initiated with the Peoples’ Republic of China.

Contrary to a widely-held belief that U.S. President Trump acts only out of impulse or is being unpredictable, I believe that the opposite is the case. Strategic geopolitical policies of the Trump Administration are a response, not of the President himself, but rather of the powers that be, the permanent establishment who actually control what is sometimes called the Deep State. The geopolitics of that policy determines to a large degree who they allow to be President.

The first official formulation of today’s Washington foreign policy came in 1992 when Dick Cheney was Defense Secretary under Bush senior. The Soviet Union had collapsed and Bush triumphantly declared America as Sole Superpower. Cheney’s deputy secretary, Paul Wolfowitz, was responsible for developing a Defense Planning Guidance, 1994-1999. It was blunt, and later described by Senator Ted Kennedy as imperialist. In part the unedited Wolfowitz Doctrine declared “Our first objective is to prevent the re-emergence of a new rival, either on the territory of the former Soviet Union or elsewhere…to prevent any hostile power from dominating a region whose resources would, under consolidated control, be sufficient to generate global power.” Under George W. Bush the Wolfowitz Doctrine re-emerged as the Bush Doctrine after 2002 in the runup to the Iraq war, declaring unilateralism and use of preventative war as central to U.S. policy.

Going back to my title, I quote from the 1997 book of the late Presidential advisor, Zbigniew Brzezinski, The Grand Chessboard: American Primacy and its Geostrategic Imperatives to make the point of what U.S. foreign and defense policy under Trump today is. It is nothing less than application of the Brzezinski geopolitical challenge and the preventive war notion of the Bush-Wolfowitz doctrine in context of today’s emerging resistance to an American sole superpower domination.

In 1997 he wrote that it was “imperative that no Eurasian challenger emerges, capable of dominating Eurasia and thus of also challenging America.”

He further declared,Potentially the most dangerous scenario would be an ‘anti-hegemonic’ coalition united not by ideology but by complementary grievances…a grand coalition of China, Russia, perhaps Iran…Averting this contingency…will require U.S. geostrategic skill on the western, eastern, and southern perimeters of Eurasia simultaneously.

When we add to this the recent Pentagon National Defense Strategy document that defines Russia and China as the greatest potential threat to American hegemony, then combine this with the growing ties between Russia, China and Iran since lifting of sanctions in 2015, especially in Syria, it becomes clear what Washington is doing. They are in an all-out effort to break what I call the Eurasian Challenge to the sole hegemon—Russia, China, Iran.

As Brzezinski pointed out, for American purposes of continued domination, it matters not that there are ethnic, religious and other differences between Russia, China and Iran. U.S. foreign policy since September 2001 has increasingly forced those three to cooperate, despite those differences, for what they see as defense of their national sovereignty.

Look at the recent events in light of the Brzezinski Eurasia warning of 1997. Washington stood behind the UK in the bogus Skripal poisioning affair that was blamed, with no proof, on Russia. A fake chemical attack outside Damascus then was used as pretext for the illegal U.S. bombing raid, ignoring all precepts of the UN Charter and international law. That, in retrospect, was more of a test of possible Russian reaction. Whether or not U.S. Tomahawk and other missiles hit or not, the precedent was set for Israel and other U.S. allies to escalate attacks on Iran in Syria.

Then come diabolical new crippling sanctions against “Putin’s oligarchs” such as Deripaski of Rusal, world’s second largest aluminum producer. Washington doesn’t even try to make up excuses for new sanctions. They state as reason that the Russian government is involved in “a range of malign activity around the globe.”

The new sanctions punish any Western banks or investors holding shares in sanctioned Russian companies even if they were bought before the new sanctions. It is the U.S. Treasury’s new form of financial war, every bit as deadly as shooting wars, if not more so. It developed in the wake of 911 and has since been refined to a devastating weapon of warfare using the fact that under economic globalization, the world is still dependent on the U.S. dollar for trade and for central bank currency reserves to an overwhelming degree.

For the first time, under the latest U.S. sanctions on Russian individual oligarchs and companies, not only is future access to borrow in western capital markets blocked. Non-Russian investors who invested billions in select Russian companies in recent years have been forced to panic liquidate or face secondary sanctions for holding Russian assets. But who will buy? Already the two major EU securities clearing companies, Clearstream and Euroclear have been forced to refuse clearing sanctioned Russian securities. They also face sanctions to hold the Russian shares. If, say, a Chinese state bank is borrowing from dollar markets, they are now de facto prohibited from doing business with sanctioned Russian companies.

At the same time as Washington escalates pressure on Putin’s Russia over Syria and Ukraine, they launch the early stage of what will clearly be a devastating economic war with China using trade as the initial lever. Washington, as I pointed out in a previous article, is aiming to force China to dismantle its strategy to bring China’s economy over the next decade into leading status of hi tech producer. The strategy is called China 2025 and is the heart of the Xi Jinping strategic agenda and of his Belt Road Initiative or economic Silk Road project.

The first taste of what Washington plans to target China’s move to become a high-tech world leader under China 2025 is the treatment of leading China telecomm maker ZTE and Huawei, major challengers of Apple. ZTE was sanctioned in April by Washington for allegedly selling telecommunications equipment to Iran. U.S. suppliers have been banned from supplying essential components to the China tech group. The company has temporarily shut operations as it tries to win a reprieve from the U.S..

Now, over the vehement protests of Germany and France and other EU states, Trump unilaterally tears up the Iran nuclear agreement. The aim is clearly to reimpose crippling sanctions again on Iran, disrupt the feeble progress that was begun since 2015. The fact that the EU refuses to break its treaty agreement with Iran will be ultimately of little consequence as U.S. sanctions on Iran also threaten with sanctions EU companies doing business in Iran.

As part of the latest Trump tearing up of the nuclear agreement with Iran, the USA gives other countries like China or Japan or EU countries 180 days to end any purchase deals for Iran oil. European companies like Airbus that have multi-billion aircraft purchase orders from Iran will be forced to cancel. On 6 August, the purchase of U.S. dollars, trade in gold and certain other metals, as well as aviation and the car industry will be sanctioned. After 4 November U.S. sanctions will target Iran’s financial and oil institutions and sanctions reinstated against individuals previously on the U.S. Treasury sanctions list.

The clear aim is to use the devastating new weapons of U.S. Treasury pin-point sanctions to plunge Iran’s fragile economy into crisis. At the same time reports are that NSC Adviser John Bolton is advocating reinvigorating the Iranian Mujahedeen Khalq, or MEK terrorist organization to launch a new try at a Color Revolution. MEK was removed from the U.S. State Department terror list by Secretary of State Clinton in 2012.

If we step back from the specific details of each country and Washington actions against each, we see that the three Eurasian powers—Russia, China, Iran—are being systematically targeted and so far with varying degrees of success.

At the end of February, General Votel, commander of U.S. Central Command or CENTCOM gave an interview to DoD News. There, in addition to listing Russia and especially her involvement in Syria and China and both its new Belt Road Initiative and its military bases in Djibouti and elsewhere, Votel cites the ties of both to Iran. Votel states that, “both Russia and China are cultivating multidimensional ties to Iran. The lifting of UN sanctions under the joint comprehensive plan of action opens the path for Iran to resume membership application to the Shanghai Cooperation Organization.”

Ironically, the simultaneous opening of a de facto three-front war, even if on the level of economic warfare at present, creates a strategic imperative for the three powers to work even more closely. China is the largest buyer of Iranian oil. Russia provides military equipment and is negotiating far more. Each of the triad—China, Iran, Russia—for reasons of self-survival –have no better option than to collaborate as never before, whatever mistrust or differences, in face of Washington’s geopolitical three-front war.

F. William Engdahl is strategic risk consultant and lecturer, he holds a degree in politics from Princeton University and is a best-selling author on oil and geopolitics, exclusively for the online magazine “New Eastern Outlook.”