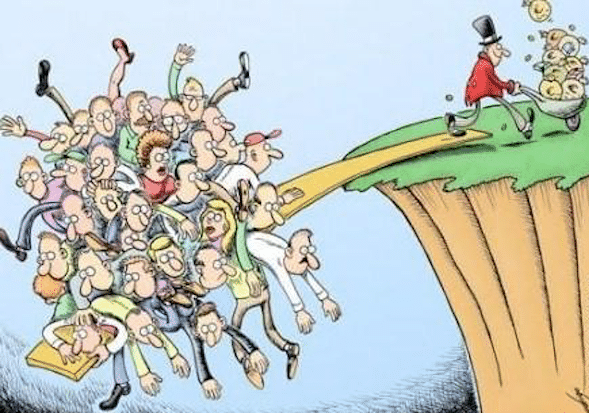 In December 2017 the Congress approved and the President signed into law the Tax Cuts and Jobs Act. The Act reduced business and individual taxes, with corporations and the wealthy the greatest beneficiaries. But, as usual, government and business leaders promoted this policy by also promising substantial gains for working people.  Any surprise that they lied?

Corporations, and their stockowners, were the biggest winners of this tax scam. The Act lowered the U.S. corporate tax rate from 35 percent to 21 percent and eliminated the corporate Alternative Minimum Tax.

It also gave a special bonus to multinational corporations, changing the federal tax system from a global to a territorial one. Under the previous global tax system, U.S. multinational corporations were supposed to pay the 35 percent U.S. tax rate for income earned in any country in which they had a subsidiary, less a credit for the income taxes they paid to that country. Now, under the new territorial tax system, each corporate subsidiary is only required to pay the tax rate of the country in which it is legally established.

As the Center on Budget and Policy Priorities points out, this change:

risks creating a large, permanent incentive for U.S. multinationals to shift overseas not just profits on paper but actual investment as well.  This could lead to a reduction in capital investment in the United States and thereby wind up reducing U.S. workers’ wages, as Congressional Research Service economist Jane Gravelle has explained. The law includes several provisions to try to limit the damage this incentive could cause, but they don’t alter the basic incentive to shift profits and investment offshore.

The Act also offers multinational corporations a one-time special lower tax rate of 8 percent on repatriated profits that are currently held by overseas subsidiaries in tax-haven countries; estimates are that there are some $3 trillion dollars parked offshore.

And, what are working people supposed to get for this massive tax giveaway to corporations? According to President Trump and House Speaker Paul Ryan, the Act would generate a substantial increase in investment and productivity, thereby boosting employment and wages. Both political leaders cited, in support of their claims, the work of the president’s Council of Economic Advisers which argued that:

Reducing the statutory federal corporate tax rate from 35 to 20 percent would, the analysis below suggests, increase average household income in the United States by, very conservatively, $4,000 annually. The increases recur each year, and the estimated total value of corporate tax reform for the average U.S. household is therefore substantially higher than $4,000. Moreover, the broad range of results in the literature suggest that over a decade, this effect could be much larger. These conclusions are driven by empirical patterns that are highly visible in the data, in addition to an extensive peer-reviewed research.

In fact, the Council’s report went on to say:

When we use the more optimistic estimates from the literature, wage boosts are over $9,000 for the average U.S. household.

Modeling the effects of a tax cut is far from simple. And, given the political nature of tax policy, it should come as no surprise that the estimate of gains for workers by President Trump’s Council of Economic Advisers was based on questionable assumptions and a real outlier. This is highlighted by a Washington Center for Equitable Growth issue brief:

These estimates imply widely varying labor incidence of the corporate tax cuts in the Tax Cuts and Jobs Act, ranging from near zero for the Tax Policy Center to multiples of the conventional revenue estimate for the Council of Economic Advisers. As a reference point, wage rates would need to increase by about 1 percent above what they would have been in the absence of the law to shift the benefits of the corporate tax cuts from shareholders to workers—and even more if revenue-raising provisions of the new law scheduled to take effect in the future are delayed or repealed.

Chris Macke, writing in the Hill, highlights just how little workers have benefited to this point from the Tax Cuts and Jobs Act:

Assuming a full 52 weeks of work, the $6.21 increase in weekly earnings would result in a $323 annual increase, nowhere near the minimum $4,000 promised and $9,000 potential annual increases projected by President Trump and Speaker Ryan if significant cuts were made to corporate tax rates.

Unless something drastically changes, it seems that Americans are going to have to settle for much less than the $4,000 to $9,000 projected wage increases. An extra $322 a year isn’t going to do much to pay down the $1 trillion in additional debt they are projected to take on as a result of the tax cuts.

Mark Whitehouse, writing in Bloomberg Businessweek, provides additional evidence that the business tax cuts are doing little for the average worker.  As he put it:

The following chart from his article shows that industries “getting bigger tax breaks aren’t giving bigger raises.” Actually, quite the opposite appears to be true. To this point, we actually see a negative correlation between the size of the tax cuts and wage increases. 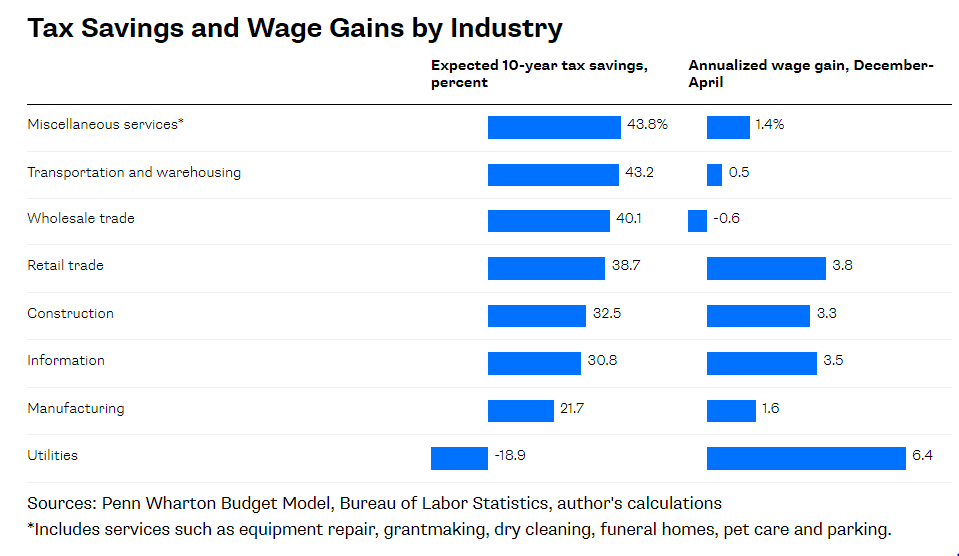 The next chart provides a more useful look at the relationship between expected tax breaks and wage increases, showing how much companies in the different industries have boosted wages relative to the previous year. Not only does the negative correlation remain, wage growth has actually fallen in the industries expected to enjoy the largest tax cuts. 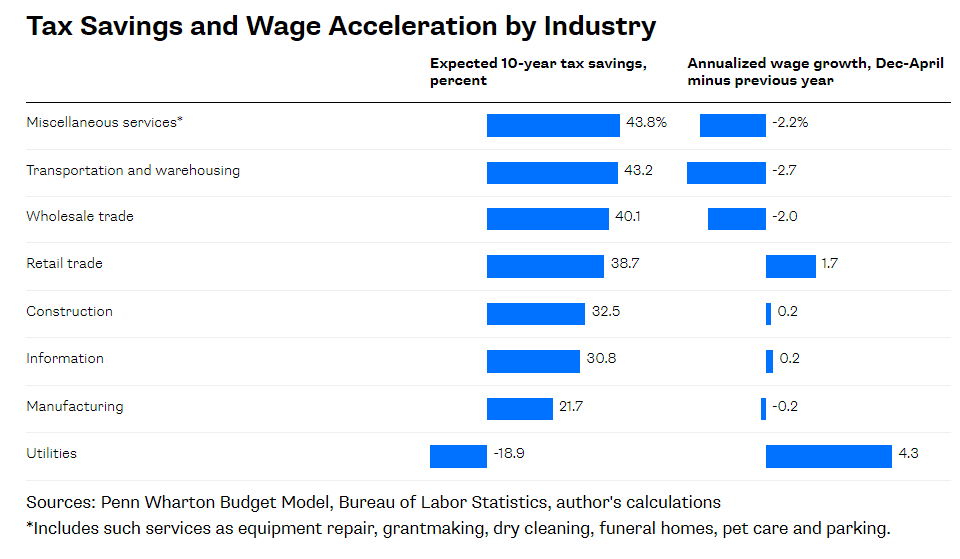 What we see is corporate power at work. And, in the face of growing stagnation tendencies, those who wield this power appear willing to pursue ever more extreme policies in defense of their interests, apparently confident that they will be able to manage any instabilities or crises that might arise. It is up to us to stop them, by building a movement able to help working people see through corporate and government misrepresentations and take-up their side of the ongoing class war.