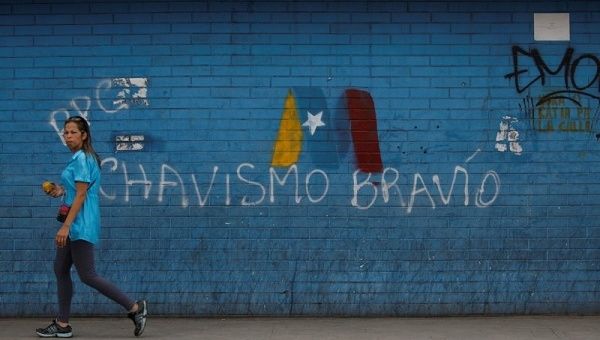 ‘Made in socialism.’ That phrase resonated a lot in Venezuela a few years ago. It was on chocolates, yoghurts, oils, posters, embedded in a heart logo and the inevitable red five-pointed star. In this last stage it became elusive, more exception than rule: every ministry happened to be of the people’s power, and each bakery or route began to be socialist. Chavez questioned it on national TV: calling things ‘socialist’ does not make them socialist. If there was something he longed to build, it was a transition to 21st century socialism. Chavismo must be socialist.

It was not like that from the beginning, at least publicly, perhaps because he had not yet reached that conclusion. Or because, in the political arena, the idea was to reach that conclusion collectively: for the people to move in that direction, developing the historic subject, the epicenter of politics. To create the desire for socialism, which Chavez mentioned for the first time in 2005.

Until that moment, and as a starting point in his first writings – for example, the Blue Book – there were strong ideas, combining and mobilizing. Like the recovery of the betrayed independence project: Bolivarian popular nationalism. It is the vindication of the national carried out by the humble, with a Latin American dimension: the ethical refounding of a devastated country, plundered for decades by a corrupt political/business class. The tricolor flag, the red beret, the military authority: plebeian, national and social liberation in the same movement. Those were lines of progress, of convening a country in organic crisis with the masses in movement from the Caracazo in 1989 and the emergence of Chavez as a thunderbolt in 1992.

The issue – and here we can trace socialist keys before their announcement – was to build that project through the implementation of central mechanisms: spaces for the exercise of participatory democracy, multiplication of popular organization, tests of parallel institutions articulated to the state, like the missions, the confirmation of a political subject able to face those tasks. The strategic center of gravity was in the humble classes, in the construction of a people’s power that took different forms over the years. The state must recover power/the economy, and then transfer it to the organized people in the process of learning how to exercise that power. A complex architecture, virtuous, possible, necessary. The socialist plots appeared before the announcement of the socialist character.

It was not about leaving the neoliberal order to stabilize a better distributed capitalism, but about looking for ways to overcome the order of capital. “This revolution has assumed the banner of socialism, and that requires and demands much more than any other revolution. We could have stayed in a national revolution, but behind those often undefined terms are hidden statements that end up being reformist, right, that they end up toeing the line,” explained Chavez.

The definition of 2005 coincides with the formulation of the communal councils, followed by the communes. Chavez draws the communal road to socialism, which means rebuilding a new state on the basis of the political, cultural and economic power of the communes. He left it in writing: the bourgeois state had to be pulverized, and for that he wrote a plan with steps. It meant building another, on participatory and self-managed keys, in parallel to the democratization of the inherited state; a key to the analysis of Istvan Mészáros. A socialism from below, endogenous, as defined.

That socialist proposal of Chavez was in tension with another, which was not formulated openly. It can be summarized in some ideas: the centrality should fall on the state, protector and actor/main subject of the process; forms of popular organization should be subordinated to institutions and cover limited and controlled areas; from that state force should be made agreements with old-guard or emerging businessmen, to bet on the creation of a national bourgeoisie, whether external or from Chavez’s trusted political allies. A state socialism on the border with the idea of a capitalism with redistribution of wealth, without removing its foundations.

You can ground this debate on concrete policies. This is what Chavez did, on a national scale, as mass pedagogy and for his cabinet: “The measurement pattern,” says Mészáros, “of socialist achievements is: to what degree the measures adopted contribute actively to the constitution and consolidation of a deeply rooted substantially democratic way, of social control and general self-management.” The way to build is different if the objective is efficient management of the state, or if – along with that – the advance is towards the recovery of power in the hands of organized communities and the implementation of a new state. The subject of the revolution is not a minister, a mayor, but the popular classes in the process of organization within a power strategy.

Chavez then raised the socialism of the 21st century, communal, feminist, with the development of social forms of ownership over the means of production, which must become hegemonic. He left years of trials in that direction, politically and economically, whose balances are a pending debt.

The various Chavismos in Chavismo watched that project from its heterogeneity and, since 2014, an economy on the ropes. The revolution found itself at a crossroads, with two possible paths: a response of defense and conservation, with possible regressions of conquests, close to the historically distant vision of the community road. The other, to deepen the changes initiated, with, for example, the “expansion of the fields of action and decision of the people’s power.” The two possibilities are guides to think about the predominant view of the interior of Chavismo  – which Chavismo? – where it seems to have opted for the first option, strengthening the agreement with the business community and retracing the communal bet.

It is a river that has stirred up history in the present. The analysis, like the actors, have desires, interests, class tensions that coexist within the same Chavismo that stays together. Where is socialism? Far, expressed in specific territorial experiences that carry that power, in dispute as a project within Chavismo, threatened by the asphyxia imposed by the war of attrition and bureaucratic tendencies that disbelieve the historical subject and believe… What do they believe?

Chavismo will be socialist or it will cease to exist.