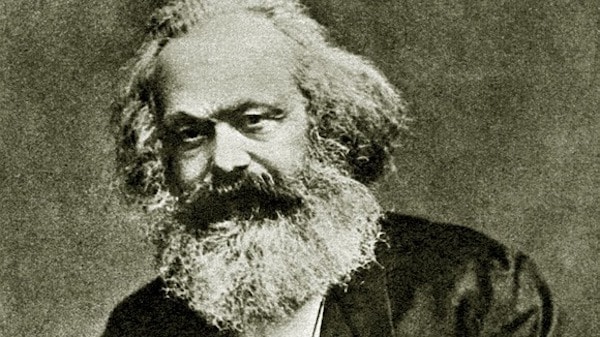 Meet Karl Marx. This is not only a wreath and a silent tribute before Marx’s grave in London’s Highgate cemetery. For students in Nanjing University, east China’s Jiangsu Province, it is a vivid talk, accompanied to music, drawing on the life experiences and current affairs taking place in modern China.

A group of young teachers and students from the university are trying to dig into the living appeal of Marx and his theories and make them popular among the younger generation in today’s China, by shooting short videos and putting them on a WeChat account for the university’s students.

The 36-episode program “A meeting in mind with Marx,” which started May last year and concluded Monday, is part of the university’s activities to mark the 200th anniversary of Marx’s birth, which falls Saturday.

Different from class teaching, the 20-strong production team tries to communicate Marxism in a light-hearted way.

“Who is Marx? His name recurs in our textbooks … He dissected reality calmly like a surgeon; he envisioned the future romantically like a poet,” Zhang Yixiu, a philosophy teacher at the university and chief scriptwriter and host of the program, wrote in the first episode.

We are going to use the youngest style, the most diversified perspective and sincerest attitude to bridge a dialogue between contemporary youth and the great mind, and present a Marx you don’t know.

Topics in the videos have been specially designed — about Marx’s youth, his interest in romanticist literature, his love story with Jenny, friendship with Friedrich Engels and the painstaking work in writing the masterpiece “Das Kapital” — to bring the political philosopher closer to young student lives.

As in some TV talk shows, teachers, students and special guests sit in couches in a studio renovated from a multi-purpose room to reconstruct a living room in Marx’s time — the 19th century.

An electric switchbox is wittily covered with a copy of Marx’s diploma.

Every episode starts with a string of music notes, from a small orchestra pit in the studio.

Profound Marxism is talked about in an easy parlance instead of the difficult jargon it is so often associated with. However, its serious significance is not compromised.

Borrowing a buzzword from China’s burgeoning entrepreneurship and innovation campaign, one episode tells the story of a frustrated “business startup” of Marx — publishing the Deutsch-Franzosische Jahrbucher (German-French Annals).

However, it was in this unsuccessful journal that Marx published two of his most important works — the “Introduction to the Contribution to the Critique of Hegel’s Philosophy of Law,” and “On the Jewish Question” — which reflected his conversion to materialism and his early communist thinking, according to Zhang Liang, professor with the university and a guest academic in the episode.

Zhang Yixiu believes that century-old Marxism, as long as it is presented with a common touch, can still be a magnet for the young.

The 30-year-old scholar became a postgraduate in Marxism in 2011 and a teacher of the university in 2016. He said that with the historic achievements China had made over recent years, he perceived a rise of interest in and acknowledgement of Marxism among students.

In the last season from February, the program began to touch on some realistic issues in modern China such as scientific and technological innovation, environmental protection and supply-side structural reform.

In an episode discussing the concept of a “community with a shared future for humanity,” Wu Jiabao, a sophomore student guest, quoted Marx’s “The German Ideology” to explain that Marx had also pictured an ideal community.

“Only in community [with others has each] individual the means of cultivating his gifts in all directions… In a real community the individuals obtain their freedom in and through their association,” she read.

Zhang Yixiu said his team first thought that finding intriguing topics and interpreting them plainly would be the biggest difficulty.

It later turned out that the most challenging part for our student guests was stagecraft.

“Sometimes I could see a student’s lips quivering with nerves during the shooting, but I think it’s ok. Nothing compares to their true feelings and heartfelt expressions,” Zhang said.

The team’s work paid off. The series can draws over 8,000 views in one episode, about a quarter of the university’s total students, outnumbering most of the account’s other posts. Many students said they enjoyed it.

“I should have been watching videos of Marx like I am watching a TV drama,” wrote one WeChat user in a comment following one episode.

“I feel that the ideas of Marx are no longer a lofty theory in a textbook, but something that resonates with ourselves and our lives,” said Gao Xinyu, a history junior.

Zhang Yixiu said Marx, with his optimistic, progressive and unyielding spirit, could never be too old for a young mind to understand.

“Do you think Marx was born to be a bearded old man?” he once asked his students.

When Marx co-wrote the immortal ‘The Communist Manifesto,’ he was no more than 30 years old.