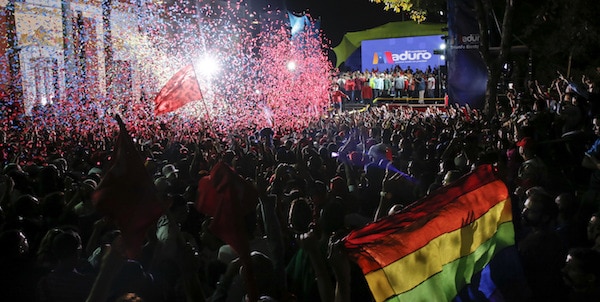 Supporters of Venezuela’s President Nicolas Maduro gather at the presidential palace in Caracas, Venezuela, Sunday, May 20, 2018. Electoral officials declared the socialist leader the winner of Sunday’s presidential election, while his leading challenger questioned the legitimacy of a vote marred by irregularities and called for a new ballot. (AP Photo/Ariana Cubillos)

Before Venezuelans finished casting their votes Sunday, U.S. Deputy Secretary of State John Sullivan announced that the U.S. would not recognize the result of Venezuela’s presidential election. Sullivan was in Buenos Aires on Sunday, leading the U.S. delegation to the G-20 Foreign Ministers’ Meeting.

International observers from over 40 countries were present on Sunday and have confirmed the transparency of an electoral system put in place in 2015 when the opposition won a majority in the National Assembly. In March, the opposition requested the U.N. not send observers out of fear it would legitimize an election they called on supporters to boycott. Nevertheless, Venezuela’s election results will be discussed on Monday at a G-20 meeting.

With 46 percent of eligible voters participating in Sunday’s election, according to Venezuela’s election board, voter turnout was less than that of the 2016 presidential election in the United States, but not shockingly so considering the opposition’s call to boycott the election completely. Despite the turnout coming close to the previously projected 48 percent, Western media has been quick to trumpet that Sunday’s election had unusually low voter participation, in an ongoing effort to delegitimize Venezuela’s government and election process.

While the United States is currently considering imposing oil sanctions on Venezuela, Sullivan reminded reporters that the goal “is to target corrupt regime officials and not the people of Venezuela.” However, sanctions have historically impacted ordinary citizens more than the leaders of the sanctioned country. Venezuela accused the U.S. on Saturday of using sanctions to sabotage the election.

Western media and U.S. officials have not been shy in highlighting what they see as failures of Venezuela’s Chavismo movement, repeatedly claiming the election would be rigged, with votes cast in exchange for food. Senator Marco Rubio has been consistently outspoken, having called Venezuela’s entire political process into question.

The dictatorship of @NicolasMaduro has, as expected conducted an illegitimate “election”. Maduro claims he received more votes than the total number of people who actually voted. Tomorrow the U.S. & international community will respond as necessary. #Venezuela

Conversely, Bolivia’s Evo Morales has been open in his criticism of U.S. involvement in Venezuela.

Translation: We denounce that the U.S. and the OAS implemented a plan to defeat #Venezuela: Before the elections, they carried out violent actions supported by the media and after the elections, they will try a military invasion with the Armed Forces of neighboring countries.

In 2017, American journalist Abby Martin visited Venezuela during a period of major political unrest to investigate a variety of U.S. claims including a widespread lack of food and why Venezuela is a threat to the U.S.

Watch | The Birth of Chavismo & Its Fight to Survive in Venezuela

MintPress reached out to Martin and she had this to say in response to Sunday’s election results and the expected U.S. response:

Before the elections, the U.S. imposed devastating sanctions aimed at hurting the Venezuelan people, which is an act of war. They’ve made clear that they will not recognize the results of this election, although it is a more transparent and democratic process than the voting system in the U.S., [one in which] every vote can be audited to disprove claims of fraud.

We expect more debilitating sanctions to be slapped on to the country that will further exacerbate the economic crisis. The U.S. empire will continue to do everything in its power to crush Chavismo and install a reactionary right-wing puppet regime that will roll back the revolutionary gains and open the country’s natural resources for a neoliberal fire sale.

All eyes are on Venezuela and the Trump Administration’s response to Sunday’s election. Latin America is often seen as the U.S. empire’s backyard with Venezuela being a political trendsetter.

The U.S. has budgeted $49 million to support Venezuela’s right-wing opposition forces since 2009, owing to concern over what Washington calls Maduro’s “increasingly authoritarian tendencies.” While Americans continue to be bombarded by claims that their own presidential election was interfered with by a foreign actor, there is no question when it comes to election interference in Venezuela.

Alexánder Schetinin, director of the Latin American Department of the Foreign Ministry, admitted that “in addition to the two traditional participants — that is, the Venezuelan people, the electors, on the one hand, and on the other the candidates who presented their programs — … there was a third participant: the governments who openly called for a boycott of the vote,” which includes the U.S. and its right-wing allies.

Emma Fiala is MPN’s Editorial Assistant and social media guru. She is also a documentary photographer, mom of two, and an independent journalist. Her stories have been featured on MintPress News, the Anti-Media, Media Roots, and Steemit. Find her on Twitter.