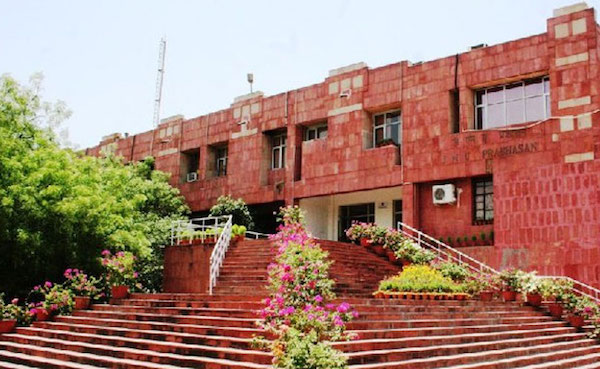 The office shared by two renowned Indian Marxist economists — Prabhat Patnaik and Utsa Patnaik — on the campus of the Jawaharlal Nehru University, where they both are serving as Professor Emeriti in the Centre for Economic Studies and Planning, School of Social Sciences, was found to be double-locked on the afternoon of 24 May.

Located on the third floor in the building of the School of Social Sciences-II, the room had been occupied by the two retired professors — who are also husband and wife, now living in Gurgaon — for more than four decades, since they joined the Centre in the early 1970s. Both had retired in 2010.

A source from among the faculty, who spotted the double-lock on the room around 1 pm, told Newsclick that the centre’s office staff told him that the Administrative Officer (AO) of the School of Social Sciences, Ashok Kumar, had put a lock on the door in the morning. The doors to the offices are obviously locked at night, and keys for those are with the Centre, but the AO came and put a double-lock on it with the keys not available with the Centre, the staff had told the source.

About a month ago, said the source, the CESP had received a letter from the administration saying that after superannuation, the retired professors should vacate their office rooms on campus, but it was not made clear whether this would also be applicable to the Emeritus Professors.

Professor Emeritus is an honourary position reserved for retired professors who are scholars “of nationally and internationally recognised eminence” with their contributions having made “a difference to the discipline and /or to society.” These are distinguished retired professors who often continue to render services to their departments — in some cases by teaching without being paid by the university.

Utsa Patnaik had written to the administration asking for clarification whether the order asking retired professors to vacate their office rooms applied to Emeritus Professors.

However, her query elicited no response from the administration, headed by vice-chancellor M Jagadesh Kumar, who has been associated with Vijnana Bharati — an organisation led by the Rashtriya Swayamsevak Sangh (RSS).

The source was not sure whether such a letter was received by other Centres and Schools as well.

Notably, only the room shared by the Patnaiks had been double-locked, and not the office rooms of other Emeritus Professors.

“The administration offered no clarity as to whether this decision, taken apparently in the academic council meeting, which was steam-rolled by the VC as usual, applied to Emeritus Professors or not. There is no dearth of rooms in the Centre, and the Emeritus Professors are rendering such a massive service by offering their guidance to students and faculty, and by still taking courses. This is obviously a deliberate and politically motivated move,” said the source.

Besides being internationally respected as economists, both Prabhat Patnaik and Utsa Patnaik are leading thinkers of the Left.