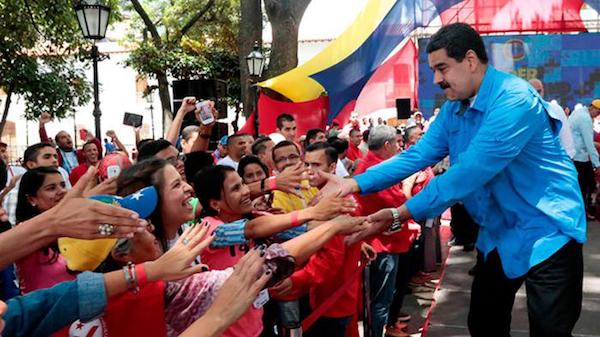 Nicolás Maduro has always remained close to his people, both in moments of celebration and in more difficult times. Photo: AVN

Economic war, sabotage, low oil prices, international sanctions, and political violence. Any president prior to the arrival of Hugo Chávez to the Miraflores Presidential Palace would have succumbed in just a few days faced with an attack such as that experienced by the government of Nicolás Maduro.

However, the Venezuelan people are still standing and supporting the leaders of the Bolivarian Revolution. How can this heroic resistance be explained?

The Bolivarian Comandante changed the history of his country forever. Chavista forces now have his legacy and the strategic project he designed for Venezuela as one of their main tools to plan the nation’s present and future.

Even some of those who oppose the current government share the ideals of inclusion, justice, and equality that Chávez brought to the political table.

The cultural shift and the means of understanding how government works were perhaps his greatest contribution, and one of the keys to comprehend this capacity for resilience.

Chávez saw in Maduro the figure to provide continuity to the Bolivarian Revolution and so he made it known a few weeks before his death.

This indisputable symbolic support has been combined with the leadership and resistance shown by Nicolás Maduro in the exercise of his functions, in the face of all threats.

Whether in the international political arena, or in countless public squares within his country, the current president manages to bring his message home to broad layers of the population, based on a revolutionary, Chavista, and anti-imperialist ideology.

Initiated by Chávez and continued by Maduro, the different social programs, or missions, established across the country, changed the face of Venezuela in just a few years. One of the most important is Barrio Adentro (Inside the Neighborhood), with the collaboration of Cuban doctors to bring health to the most remote corners of Venezuela.

Through mid-2017, a total of 71,900,000 medical examinations (from blood samples to computerized axial tomography scans) had been conducted free of charge, and nearly three million surgical procedures had been performed. 179,191 lives have been saved; 830 indigenous doctors have graduated, and thousands more are being trained.

Operation Miracle, also with Cuban help, has allowed more than 70,000 Venezuelans to recover their sight.

In another field of huge social impact, that of housing, the Bolivarian nation has broken all records with more than two million dwellings built and handed over to the population.

THE HUMANIST VOCATION OF THE REVOLUTION

Since 2013, the Maduro government has deepened the humanist vocation of the Revolution initiated by Chávez, dedicating the largest share of the Gross Domestic Product to social programs and wealth redistribution.

Even in the midst of the limitations and the economic sabotage of the right wing, citizens have not been abandoned to their fate.

For example, in 2016 a program was launched to provide food to the population at fair prices and stem speculation, currently benefiting more than 12 million families.

Through the Local Supply and Production Committees (CLAP), more than 60,000 tons of food and basic products are distributed to the most vulnerable sectors of Venezuelan society.

Despite the victory of the right in the parliamentary elections of 2015, which seemed to breathe new life into this discredited political faction, with a tendency for violence, during recent months the Democratic Unity Roundtable (MUD) coalition has become increasingly divided.

Some sectors are still committed to sabotage and the destruction of the country as a means to gain power, while others are considering the possibility of confronting Chavista forces at the polls, as seen in the recent presidential elections.

This split was deepened by Henri Falcón’s decision to run in the elections, thus distancing himself from the MUD boycott.

Due to individual vanities and in-fighting, as well as the social cost of their violent methods, right wing sectors are increasingly losing credibility. However, they have continued to be a destabilizing factor and offer an open door to foreign interference in the country.

The current Bolivarian National Armed Forces (FANB) have a radically anti-imperialist, anti-oligarch, Zamorista, Chavista and nationalist character. This is another of the great achievements of Chávez, and one of the guarantees of stability in the country.

In the midst of the critical situation faced due to the attacks by national and international enemies, the Venezuelan Defense Minister, Vladimir Padrino López, made public his rejection of any attempt of armed uprising against the legitimate government.

“The Bolivarian Revolution, the state, and the Venezuelan people have and can count on the Bolivarian National Armed Forces (FANB) fulfilling their tasks constitutionally,” Padrino stated.

Meanwhile, the FANB reaffirmed its allegiance to the Constitution and the Venezuela people following the interventionist declarations of the United States.

During the last two decades, Venezuelans have also grown aware that their country, with its great natural resources, plays a crucial role among nations, especially in Latin America and the Caribbean.

Bolívar’s ideals are at the core of Chavista thinking, especially his warning that “The United States appear destined by Providence to plague America with misery in the name of liberty.” Both Chávez and Maduro took on that anti-imperialist vision, working in favor of Third World causes.

The government of Nicolás Maduro is an international voice for the humble and the exploited, which provides Venezuela with a dignity recognized by the peoples of the entire world.