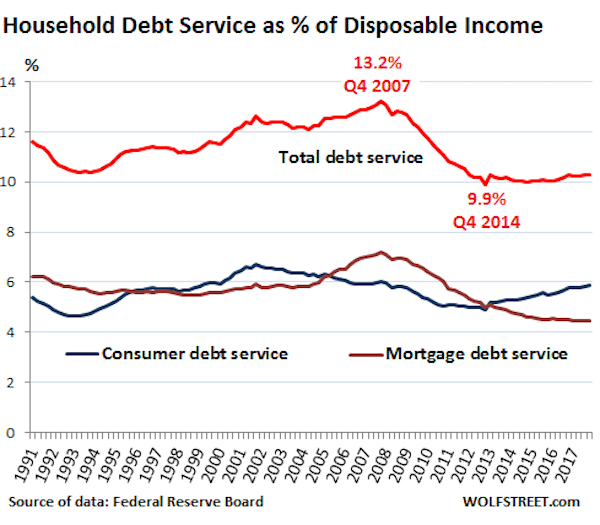 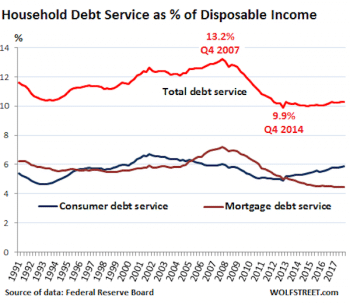 This type of chart is trotted out constantly these days to show that American households are in fabulous shape when it comes to their ability to service their blistering record debts. The red line in the chart shows household debt-service payments (combined monthly payments on mortgages, credit cards, auto loans, and student loans) as a percent of disposable (after-tax) income. Since 1980, the ratio has ranged from 9.9% to 13.2%. It hit that top in Q4 2007 just before it all came apart. Ten years later, it was at 10.3%. Hence the conclusion that households won’t have any trouble servicing their record debts. In a moment, we’ll get to the trap in this conclusion.

These debt-service ratios are a function mostly of three factors: The dollar amount of the debt; the interest rate on that debt; and the amount of disposable income. The logic is that rising disposable income supports rising indebtedness.

It all looks good, in terms of the debt burden. And so the red line in the chart above is trotted out to show that the American consumer–this unified, amorphous, monolithic structure whose job it is to hold up the entire global economy–is strong and won’t buckle.

But there’s another way to look at this—and not as a monolithic structure. Many consumers are debt free and have lots of money and good jobs. Other consumers have large amounts of debt, lousy jobs or no jobs, and are paying for groceries by charging them on their credit cards. Credit problems always involve the most vulnerable consumers. During the mortgage crisis, the delinquency rate peaked at 11.5% in 2010. It wasn’t the 60% of homeowners that had significantly payed down their mortgages or owed no money on their homes who triggered that event. It was the financial mayhem among the smaller portion of the most exposed and most vulnerable.

For a different view of the burden of debt, let’s look at non-housing consumer debt, because this is where the music is playing right now. To eliminate for a moment the impact of interest rates, let’s look at the amount of debt–not the monthly payments–as percent of disposable income. 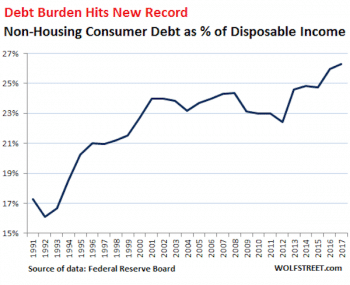 And suddenly, the risks emerge a little more clearly. At year-end 2017, the ratio of non-housing debt  revolving credit such as credit card balances, plus auto loans and student loans–to disposable income reached a new record of 26.3%, up from 23% at the end of 2010, and up from 24% in 2007, the peak before it all came apart during the Great Recession:

So the ratio of non-housing consumer debt to disposable income–the burden these consumers carry on the backs in relationship to their incomes–is higher than ever, and only historically low interest rates have kept it manageable.

But interest rates are now rising, and many of these consumer debts have variable rates.

This explains a phenomenon that is already appearing: How this toxic mix–rising interest rates and record high consumer debt in relationship to disposable income–has now started to bite the most vulnerable consumers once again. And for them, debt service is getting very difficult.

In Q1, the delinquency rate on credit card debt at banks other than the largest 100–so at the 4,788 smaller banks–spiked to 5.9%, higher than at the peak during the Financial Crisis, and the credit-card charge-off rate spiked to 8%. These smaller banks marketed to the most vulnerable consumers that had been rejected by the biggest banks. And now, once again, subprime is calling. Read…  Credit Card Delinquencies Spike Past Financial-Crisis Peak at the 4,788 Smaller U.S. Banks