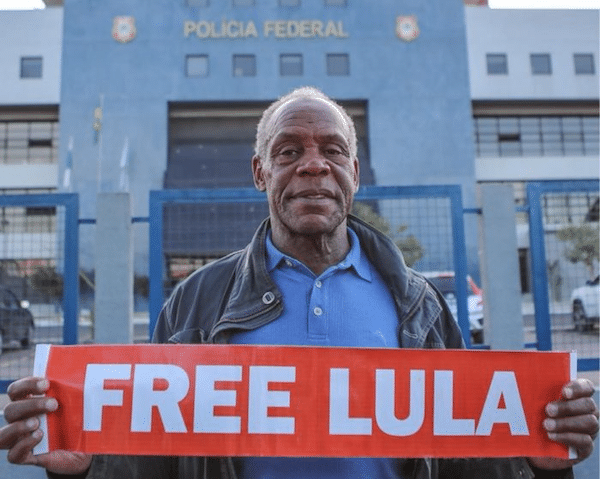 Just when you think things are far too bleak, the human spirit rises to surprise you. In Brazil, the truckers went on an extended strike. They are angry about the fuel prices. It has made it impossible for them to make a living. Then, on the back of this strike, the oil workers went on a 72-hour ‘warning strike’ to send a message about these fuel prices. There is every indication that this government–the ‘coup government’ of Temer–is eager to privatise Brazil’s most important state-run asset–Petrobras. For a short report on the strikes and on the policy of privatisation in this sector, please see my article at Newsclick here.

But the strike of the oil workers did not last past one day. It could not. The oligarchy is eager to make dissent a criminal act. The Superior Labour Court justice–Maria de Assis Calsing–declared that the strike was ‘abusive’ and posed a threat to the ‘Brazilian population’. The court imposed daily fines of up to two million reais. The union has suspended the strike. But meanwhile, a victory for the working-class: the head of Petrobras has now resigned.

The picture above is of the American actor Danny Glover at the encampment outside the prison where Lula is being held. Lula continues to lead all the opinion polls for the October presidential election. The oligarchy in Brazil has tried to seize the dynamic from the democratic forces–at this time led by Lula–by a specious campaign against the former president. Our Tricontinental: Institute for Social Research  office in São Paulo has written a wonderful dossier on Lula and the Battle for Democracy in Brazil. I hope you will read it, available for free download here; but more than anything else I hope you will share it with others and use it wherever you can. It begins at the encampment, named for Lula’s late wife, and ends with powerful letters to the Brazilian people from the Landless Workers Movement (MST) and the Popular Front. Lula Livre is the slogan: Free Lula. Our dossier interprets that slogan to mean: Free Brazil’s Democracy, now engaged in the coup. 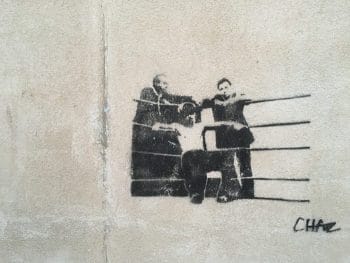 The title of this newsletter–Imperialism Has Had a Tough Week–comes from the chaos unleashed by U.S. President Donald Trump. His attempt to scuttle the dynamic of peace in Korea and the nuclear deal with Iran has been dampened by a lack of enthusiasm amongst close U.S. allies–especially the Europeans, but also Japan. Cancellation of the summit with North Korea’s Kim Jong-un merely moved Kim to reach out to his South Korean counterpart and show Trump how truly isolated the United States has become in many parts of the world. I imagine Trump, aghast at what he surely sees as disrespect. ‘Trump sits in the White House, wondering—like a child bursting with testosterone and fed a fantasy version of reality by Fox ‘fake’ News—why the world does not bow to him,’ I write this week in Alternet (you can read the entire column here). The only way to revive American authority in Iran and in North Korea as well as amongst otherwise stalwart allies of the U.S. is to start a war–which, most horribly, would tempt a nuclear holocaust. Trump descends, unable to send off a few nukes at his adversaries, to twitter. That is where he is most comfortable.

If Iran and North Korea cannot be subdued, then perhaps a tariff war against everyone seems in order: against the Europeans, China, Canada, Mexico and…..well, everyone. What Trump has done, in essence, is to weaken further the institutions of American globalization that were shaped in the 1990s–institutions such as the World Trade Organization. His tariff war is a tantrum, but it is not necessarily bad for the rest of the world. Out in Asia, the Chinese are busily building their own institutions of globalization in the ‘Belt and Road’ as well as the ‘String of Pearls’ projects. Other states are eager to produce regional networks for trade and development. What Samir Amin calls ‘de-linking’ or what Walter Rodney called ‘disengagement’ returns to the table. Will these states and these regions be able to confidently fashion procedures and institutions for alternative development? (I raise some of these themes in a brief radio programme this week, which you can listen to here). 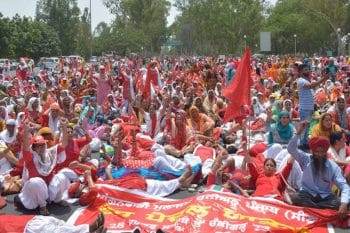 The anganwadi (child care) workers on their long march from Fatehgarh Saheb to Chandigarh in the Punjab state of India.

It was 44 degrees in Punjab, when the anganwadi (child care) workers began a long march from Fatehgarh Saheb to Chandigarh. The hot tarmac bruised the feet of these brave workers, who wanted to push their fight for better working conditions to the capital of the state. It was the protests of these workers in 2017 that steeled the backbone of the opposition to the right-wing BJP government, which lost the assembly election. Now, these workers are back. They are fighting the Congress government and the police, who attacked the peaceful workers as they slept on their journey.

Our Tricontinental fellow, P. Sainath, was recently in Punjab. He is writing a series of articles on the agrarian situation in this state. These stories will become part of a dossier, which we hope to publish within a month or so. While in Punjab, Sainath spent an hour with S. P. Singh on his television show (in Hindi, here). Sainath went to Punjab as India’s Prime Minister Narendra Modi’s government celebrated its fourth year in office. At the old nationalist newspaper, the National Herald, I have a short assessment of Modi’s four years. You can read it here.

Last Friday, thousands of people took to the streets of Buenos Aires (Argentina) to say, ‘The Country Is In Danger’. 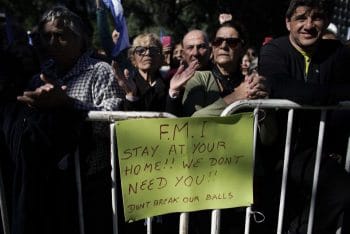 They came to protest the decision by the government of President Macri to conduct negotiations with the IMF (FMI in Spanish) for a line of credit. Macri + FMI = Miseria, they wrote on pieces of cardboard. They do not want to enter the net of the IMF, which–they remember–had sucked dry the ability of Argentina to function in the early years of this century. Catastrophic debt in that era was met by an IMF that refused to negotiate in good faith with one Argentine government after another. The mess was so deep in the IMF that the report of its Independent Evaluation Office (2004) was found to have been massaged to protect the IMF from criticism. No wonder that the Argentine people are suspicious of the IMF and its operations. It is not the line of credit that it is the problem, for after all a line of credit would simply give Argentina’s government the ability to defend its currency (the peso) and give it flexibility in its social investments. The problem, rather, is what conditions the IMF will place on Argentina. Most likely, the IMF will demand that Argentina cut its current account deficit, which will make the economy contract and cause widespread distress in the country. The IMF will get it neoclassical fundamentals right, but Argentina will once more sink into depression and chaos.

I imagine the hands at this rally in Buenos Aires reaching across the Atlantic Ocean, stretching towards Ireland, from where other hands reach out to grasp them. On one side, powerful crowds came to say no to the IMF. On the other side, Irish voters said yes to women’s rights (in particular, to abortion rights). This year, on March 8–International Women’s Day–tens of thousands of Argentines blocked the streets to demand the de-criminalisation of abortion in their country. Protests against anti-women violence–Ni una menos (Not one less)–and for abortion rights have cascaded in this South American country. In Ireland, 66.4% of voters ended the criminalisation of abortion. Chile ended its criminalisation last year. This month, Brazil’s Supreme Court will hear a case about the decriminalisation of abortion. If Ireland can dispense with this archaic approach to the body of women, so can Latin America. That is the hope of Argentinian women and Salvadorian women and Dominican women. Each year, 900 women die across Latin America because of unsafe abortions. 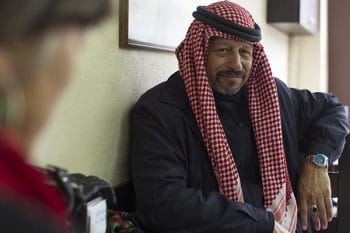 This week I spoke to my friend Jamal Juma of Stop the Wall in Palestine. Jamal, pictured above, is a sensitive and sincere person, an activist since the first Intifada. It is not politics that motivates him, although he is a deeply political person, but it is people. When I was last with him in Palestine, he would go from one demonstration to a funeral, but each time would be seized by the opportunity to meet this person or that. I asked him how things were in Palestine. His response was grim. ‘We are being liquidated,’ he said. The de-funding of the UN Agency for the Palestinians (UNRWA), the move of the U.S. embassy to Jerusalem, the creation of new settlements in the West Bank, the targeted arrests and killings of children, the recent bloody attack by the Israeli forces on the people in Gaza–all this amounts to a policy, Jamal says, of liquidation. There is no longer the question of a two-state solution or a one-state solution. On the table, quite literally, is the survival of the Palestinian people.

Jamal’s group–Stop the Wall–is leading an effort across Palestine (inside the West Bank and Gaza, inside Israel, in the diaspora) to provide a vital political project against liquidation. It is a truly powerful campaign. Please go to their crowd-funding site and support them generously. Help Jamal and the popular committees, the youth committees, the farmers’ unions, the trade unions and so on to build a new Palestinian liberation project. It is the antidote to liquidation by Israel’s apartheid policies.