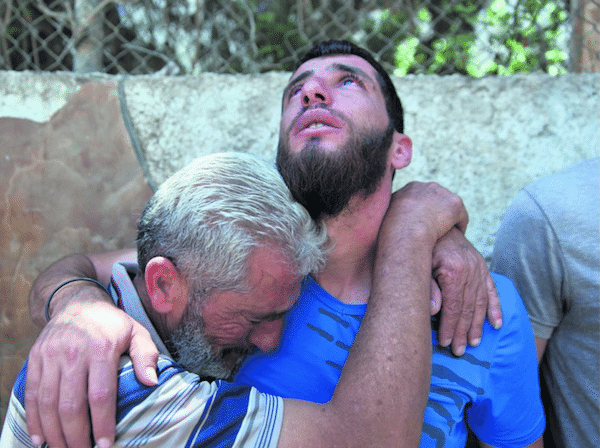 ISRAEL has been accused of a “cold-blooded execution” after soldiers killed another member of the Tamimi family in the occupied Palestinian territories.

Ezz al-Din Tamimi was shot dead at close range by Israeli soldiers in the West Bank town of Nabi Saleh during raids on Wednesday.

Soldiers fired three bullets into him, according to eyewitnesses, hitting him in the back of the neck and in the chest.

The Israeli military claimed the killing was in response to an attempt by a group of Palestinians to stop troops from carrying out arrests in the town, during which a soldier was hit by a stone.

“The soldier responded by firing at the Palestinian, who was wounded and given medical treatment at the scene…,” the Israeli occupation forces claimed in a statement.

He was treated at the scene and he was later declared dead. None of our troops were hurt. The incident will be investigated.

However, locals suggested that the killing was deliberate, alleging that Israeli security forces had previously threatened to kill Mr Tamimi, whose family are well-known campaigners against Israel’s illegal occupation.

The execution of Tamimi in cold blood, with three bullets at close range, proves how much our people are in need of international protection against the Israeli war machine.

The family rose to international prominence following the arrest of Ahed Tamimi last year. The then 16-year-old girl had slapped a heavily armed Israeli soldier after her 15-year-old cousin was shot in the face by a rubber-coated steel bullet, causing serious injuries.

She and her mother later received eight-month jail sentences, despite global condemnation.

The family has been persecuted for years by Israeli forces, with many of them being arrested or killed while taking part in unarmed and peaceful protests against the occupation.

Ahed’s cousin Musab Firas al-Tamimi became the first Palestinian to be killed by occupation forces this year when he was shot in the neck in January.

The United Nations is investigating Israel over potential war crimes committed when more than 120 unarmed Palestinians were shot dead by Israeli snipers during the Great Return March protests in April and May.

On the the bloodiest day, May 14, more than 60 people were gunned down as Palestinians commemorated the 70th anniversary of the Naqba, the expulsion of more than 700,000 Palestinians from their land during Israel’s creation in 1948.