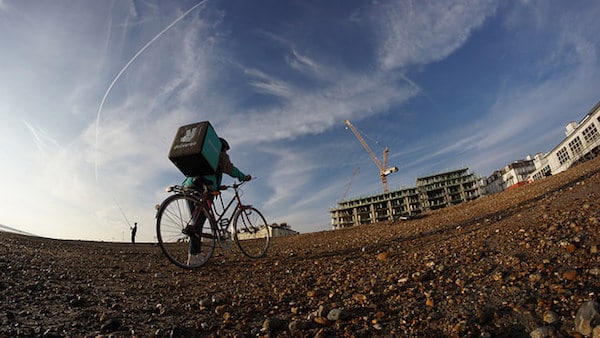 Over two warm days in mid-May, staff at the Dagenham Tesco’s distribution centre went on strike, their picket only a short walk from where auto workers, 39 years before, occupied the then-huge Ford plant against ‘layoffs’, whereby work and wages were stopped, as soon production became unprofitable.

BetterRetailing.com expected that ‘80% of Tesco Express stores in and around London’ would be affected by the strike, with the ‘just-in-time’ method–layoffs’ sibling–meaning minor delays can cascade down the supply chain.

The best recent work on the history and the contemporary promise of the move from Ford to Tesco is Kim Moody’s On New Terrain: How Capital is Reshaping the Battleground of Class War. In the following interview, Moody gives a sense of that history, before discussing the potential for organising in the UK today.

In the first part of your book, you show that the numbers of workers in manufacturing in the U.S. is 5.7 million down since 1979. You argue that this loss of manufacturing jobs isn’t due to imports, as the current administration claims, but is rather the result of changed labour-capital relations in manufacturing itself.

Could you give a sense of those changes since the end of the 1970s? What was their international impetus?

Naturally, imports have affected a number of industries in the U.S., such as textiles, garments and some electronics, while increased imports of intermediate parts have taken somewhat of a toll on employment in many industries.

But, overall, the dramatic loss of manufacturing jobs has been the result, on the one hand, of the volatility of the world economy, particularly the recurrent recessions, and on the other, the significant, even large productivity increases in manufacturing between the recessions, beginning in the 1980s, which are mostly the result of lean production. There is a relationship between these two processes.

Even in the steel industry, where Trump is now making a big protectionist effort to ‘save American jobs’, imports account for only about 25-30% of U.S. sales. The rise of more efficient, domestic ‘mini-mills’ now accounts for over half the U.S. market. The traditionally unionised, major steel firms lost most of their market to these domestic competitors. The major culprits for manufacturing job losses are capitalism’s turbulence, and the successful introduction of lean production, surveillance technology, and other forms of work intensification that have cost jobs, and union jobs in particular.

The ‘international impetus’ is that the major effect of globalization–the rise of China and the BRICs–is to intensify competition in the developed economies. That, in turn, has led to many of those domestic changes.

Now, the volatility of capitalism has reached China, creating problems for its manufacturing sector, at the same time as those various intensifications spread across the world. These forces of capital accumulation may play out differently in different countries, but the social crises they produce are becoming more universal, even if they’re still uneven.

It seems from your account that both processes have occurred in the steel industry–people work harder, in part due to a changed production process, with job losses as the result. Do we see this same mixture of ‘regressive’ and ‘progressive’ change in other industries?

Capital around the world, and not only in the U.S., the UK or the EU, has applied both formal and real subsumption.

Work days have been extended through reducing break-time–or even extending the workday, as with ‘alternative work schedules’–whilst, at the same time, capital intensity has increased across industries. This ‘direct application of science and technology’ both monitors labour, and displaces it.

For example, in the last two decades or so, capital has transformed the warehouse. Warehouses have gone from low-tech sites of storage to huge structures, employing robotics, tracking technologies, accounting IT, and so on. Today, the function of most warehouses and also distribution centres is to move goods in and out, often through cross-docking–road, track, air and sea freight, organised together–as fast as possible.

In the U.S., since the late 1990s, the number of new, much larger warehouses and distribution centres increased 2½ times. By 2017, the number of non-supervisory workers had increased 1½ times, to almost a million. Time has become a more central part of competitiveness; e-Commerce has accelerated this process. So, real subsumption, the dominance of capital over the labour process, has come to a once–backward industry.

At the same time, in the name of ‘flexibility’, the efforts to streamline logistics is accomplished by increasing the ‘standardization’ of the labour process–‘standardization’, a word that ranks as high-priority in management surveys, meaning the reduction of work to its simplest. So, warehouse workers may wear a digital scanner on their arms, but they still pick up and push boxes, increasingly at a pace set by capital.

High-technology and what comes close to ‘abstract labour’ go hand-in-hand, from factories to warehouse to retailers to service sector settings such as hospitals and hotels.

That leads to my next question, on the service sector, and the possibility of countering these tendencies you’ve described.

There’ve been a series of attempts over the past five years to organise private service sector workers, without any industry-scale breakthrough. Is there something about this work that militates against organising?

Are the efforts of the IWGB Uber workers, of UVW cleaners, of BFAWU’s McStrike, and Unite’s TGI Friday’s staff presaging a ‘wave’ of strikes in this sector, or, in their tiny size, do they only serve as exceptions to a rule–that such workers are, if not ‘unorganisable’, then at least peculiarly powerless?

I think there are very few workers that are ‘unorganisable.’ There are, however, differences in the relative power workers have in so-called service jobs.

On the one hand, you have large numbers of workers of various skills concentrated in huge workplaces, like those in hospitals, hotels, warehouses, and so on, whose situations are in many ways analogous to ‘industrial workers.’ Some of these are organised, or are being organised. Even cleaners, who work in crews in large buildings, have been unionised in the U.S., and so have some call centre workers.

Now, in the UK, we see workers with less obvious power, like Deliveroo workers and cleaners getting organised. Some of this is being done by alternative unions like the IWGB or the Cleaners’ and Allied Workers Independent Union. As to whether these newer organising efforts are ‘presaging a “wave” of industrial organising’ or are simply ‘exceptions to a rule’, being that such workers are ‘unorganisable’, we can refer to the chapter in On New Terrain titled ‘The Coming Upsurge?’

The question mark denotes the fact that we almost never know when a new ‘wave’ or upsurge in organising, striking, or politicising of groups of workers thought to be too fragmented to lead an upheaval in class struggle will occur, if at all. Match ‘girls’? Dockers? West Virginia school teachers?

The chapter builds on Eric Hobsbawm’s observation that unions and working class movements don’t grow ‘as a mere rising slope’, nor are they simply a consequence of economic change. They exploded as a result of accumulations of ‘inflammable materials’ under ‘compression’.

In other words, no matter which groups of workers take action first, periods of forward movement for the working class come as general upheavals. Of course, what comes before in terms of grassroots activism makes a difference.

Following the the University and College Union leadership’s less-than-democratic performance during the recently-paused pensions dispute, members are talking about how to build independent power. Could you give your sense of ‘rank and file’ (r&f) trade unionism today, and the ‘militant minority’-model it’s sometimes contrasted with?

The distinction between rank-and-file (R&F) and the militant minority can be overdrawn. They are interrelated. ‘R&F’ refers to the union’s membership and, in practice, to its active membership. R&F rebellions in U.S. unions against conservative, entrenched leaders are a recurring phenomenon, though mostly at the branch level.

In the last few years a small number have ‘taken over’ national or international unions, or come very close, as in the case of the 2016 Teamster elections. Such rebellions are more than electoral slates. They tend to arise from fights over workplace or related issues, to which the leadership’s response is inadequate, or altogether lacking. They usually incorporate goals such as union democracy, stronger workplace organisation, as well as militancy. Today, they are likely to include demands around race–and gender equality as well. Some are led by leftists, but many of these rebellions are often led by workers with little political experience. As a result, some fail, or achieve only partial results, or take office and are overwhelmed by the forces against them—capital, state, and the union old guard.

This is where the ‘militant minority’ comes in. The term was used by syndicalists in the U.S. and UK over a hundred years ago to denote a layer of politicised workers who saw beyond the immediate conflicts to an analysis of the capitalism as a system, and to eventual radical social change. This tended to make them more effective leaders–they are the backbone of R&F rebellions.

This politicised layer of activists that had built the industrial unions in the U.S. in the 1930s and 1940s was destroyed in the 1950s by the interrelated forces of rising bureaucratic business unionism, the purges of McCarthyism, and the relative prosperity that lasted through the 1960s. The R&F upsurge that was part of the broader social upheaval of the 1960s and 1970s was largely unsuccessful in transforming the unions due, in part, to the lack of a coherent ‘militant minority’. Since that time, there have been mini-waves o R&F rebellions in various unions, but no general upsurge.