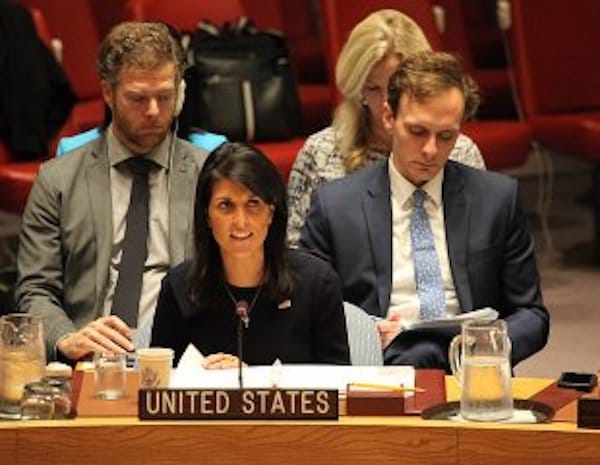 The United States has decided to formally depart from the United Nations Human Rights Council. This action by the Trump administration has been met, in liberal American and European circles, with righteous indignation. Various rights groups—Human Rights First, Save the Children, CARE—said, in a statement, that the U.S. withdrawal would “make it more difficult to advance human rights priorities and aid victims of abuse around the world.” The European Union said that Washington’s withdrawal,

Risks undermining the role of the U.S. as a champion and supporter of democracy on the world stage.

Most dangerous country in the world.

If you look at the United States from Guatemala or from Iraq, for instance, you see the United States not as a “champion and supporter of democracy” but as a power that has forced its agenda in a thoroughly undemocratic fashion. You would point your finger at the following kinds of actions by the United States government taken over the course of the past century:

The withdrawal from the UN Human Rights Council must be seen in this context. If Washington does not get its way, it either tries to undermine the UN body or it leaves.

In the 1970s, the Nixon administration sent Daniel Patrick Moynihan to the UN as the U.S. ambassador with the express purpose of undermining the General Assembly and moving its powers to the UN Security Council (I document this in Poorer Nations). Since the U.S. had a veto in the Security Council, it could properly try and control the verdict of the UN. That was the goal. Indeed, Moynihan succeeded in setting aside the General Assembly. Its resolutions are now not treated as serious. Attention is focused on the Security Council.

What Bothered the United States?

The United States is happy to criticize countries around the world that are not its allies, but it will not tolerate any criticism of itself. Last year, the Human Rights Council’s special rapporteur on extreme poverty and human rights reported that the tax policies of the United States made the U.S. one of the “most unequal societies in the world.” This rankled the Trump administration.

But the real burr under Trump’s saddle has been the Human Rights Council’s criticism of Israel. The Council, following several UN resolutions, has been obliged to study the Israeli occupation of Palestine and the various violations of UN resolutions by Israel. In recent years, the Human Rights Council has been more aggressive in this agenda. In January, the Human Rights Council delivered a preliminary report about its database of companies that have violated UN Security Council Resolution no. 2334 on doing business with Israeli settlement firms. The United States—on behalf of its own companies and of Israel—has sought to block this report. It has not been able to do so.

If the work on this report goes forward, it would be a boost to the Boycott-Divest-Sanctions (BDS) movement. This is because the report would give UN sanction not only to boycott these firms, but it would place these firms in a pariah-like situation. For the United States, it is acceptable to run sanctions policies against its adversaries—Iran, North Korea, Russia, Venezuela—but it is unacceptable to allow these to impact its friends. This is not a matter of principle regarding human rights, but of politics.

The United States, which has a history of promoting human rights violations, has now left the UN Human Rights Council. So be it. Here is one more illustration of the decline of U.S. influence on the world stage.

This article was produced by Globetrotter, a project of the Independent Media Institute. The big story is in other commercial services, which include the range of services in which U.S. companies are globally competitive: construction; insurance and pension services; charges for the use of intellectual property; telecommunications, computer and information services; other business services; and personal, cultural and recreational services .

For whatever reason, the rents of U.S. MNCs from various kinds of intellectual property and market dominance in media and entertainment industries, as well as the sector so beloved of the U.S. President, construction, have already shown even greater increases during his tenure so far.

What are the implications of all this for the US’s trading partners? The obvious lessons are already well known: do not expect any concessions from the U.S. on any front and watch your own back. But there are other less obvious lessons.

Pious neo-liberal multilateralism, as expressed in the rules and operations of the WTO, created a system of monstrous but legally entrenched inequalities.

The implosion of that system lays bare some of its hypocrisy. Perhaps smashing the myth of benign intent will allow all countries to demand policy space to address the real concerns of their own citizens.