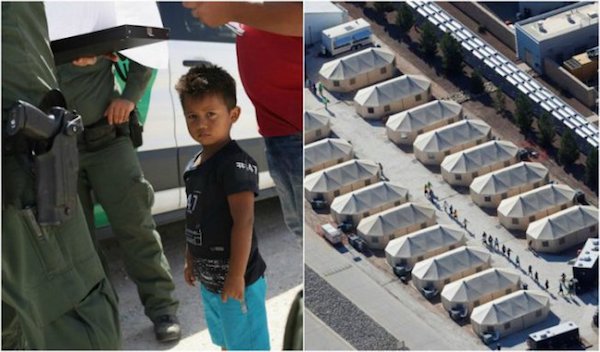 After massive repudiation of Trump’s policy of separating children from their parents and imprisoning immigrant children, he was forced to backtrack. After Trump’s newest executive order, families will be imprisoned together for the “crime” of crossing the border.

Children and their parents will share the same fate in detention centers: harassment by guards, overcrowding, and imprisonment. The executive order does not provide an end date to the detentions, opening the possibility of extended confinement. Furthermore, there is no concrete plan to reunite children with their families. These children will forever carry the psychological trauma of being separated from their parents and kept in cages.

Detention centers, administered by the Department of Health and Human Services have been built in 17 states in the United States to “house” detained children. According to official figures, there are 12,000 children in government facilities in the United States right now, of which some 2 thousand who entered the border between May and June were separated from their parents. According to media such as the Washington Examiner these detention centers are receiving 250 children each day.

Images speak more than a thousand words: children are locked in cages, placed in large tents, forced to sleep on concrete floors with just a thermal blanket, and all this due to immigration status and ethnic identity. We are watching a chilling dystopia unfold in real time.

In the face of global outrage, Donald Trump posed the problem as a zero-sum game: either open borders or criminalization and imprisonment of migrants. To convince people of the validity of his policies of criminalization and “deterrence,” Trump propagates bold-faced lies. We don’t want to be “infested” by criminals, the President says, insisting migrants are criminals or even “animals”.

Those who migrate to the U.S. are workers—the most vulnerable, exploited and poor. They are destitute people who flee the poverty and violence that the U.S. has helped to create in Mexico and Central America. This mass migration to the U.S. is a consequence of imperialist penetration into Mexico, perpetrated by both the Democratic and Republican Parties. The thousands trying to enter the country without papers are doing so because the U.S. has decimated their countries socially and economically, supporting coups and dictators as well as taking away their land, privatizing the water, and making it all but impossible to raise a family in peace.

Upon arrival, those who immigrate to the U.S. work in ultra-precarious, under-the-table jobs in order to send a small amount of money home to their families. These “criminals” actually clean the bathrooms and the floors of the restaurants, buildings, and businesses that we eat and work in. They are waiters, construction workers, and domestic workers; they are workers who struggle every day. These workers are a large part of what make the American economy move.

While Trump uses blatantly racist language to describe immigrants, Democrats shed crocodile tears. In fact, the first images that emerged of child detention centers were from the Obama administration—not Trump’s. “Deporter-in-Chief” Obama forced more migrants to leave the country than any other President in history. In short, the mass deportation machine that Trump is using was built by Obama.

Barack Obama broke the record of deportations with more than 2.7 million people expelled from the United States. This created a true industry of deportations to the benefit of security companies and administrators of detention centers, such as Correction Corporation of America (CCA) and Geo Group. These companies not only receive millions in profits from the U.S. government but also force the people arrested to work for miserable salaries for companies such as Boeing, TWA, Konika, Texas Lockhart Technologies, Microsoft, Starbucks and Colgate Palmolive while detained.

The Mexican government, gendarme of the White House

Under Obama’s second term, the Peña Nieto government launched the Plan Frontera Sur, the objective of which is to prevent Central American migrants from passing through Mexico on their long journey to the United States. This included harsher immigration restrictions, as well as an increase in funding and resources for Mexico’s immigration police force. The Mexican government didn’t stop at doing Obama’s dirty work; it also collaborates with Trump. In 2017, the Mexican authorities deported 72,128 people who sought to reach the U.S. As reported by Proceso, the U.S. government is pressuring Mexico to officially build detention centers in its side of the border and prevent for migrants seeking to reach the United States.

Crossing Mexico has become a nightmare for those seeking to reach the northern border with the United States; those who migrate face abuse at the hands of police, immigration agents, and the military, who not only extort, persecute and beat migrants, but who are responsible for delivering them to drug cartels. The cartels use these Central American migrants as slave labor or integrate them as “sicarios” (drug gangs).

Hypocritically, Peña Nieto repudiates the detention of migrant children and the separation of families, but he has been one of the most enthusiastic leaders and promoters of imperialist policies on Mexico that are the root cause of the current migration crisis.

Mexico shares nearly 3,185 kilometers (1,979 miles) of the border with the United States. It is the border through which more migrants cross in the world yearly.

The border is constantly being crossed by people and commodities, both legal and illegal. Mexico and Central America export labor, raw materials and narcotics to their northern neighbor, while the United States invests a massive amount of capital in Mexico, building factories which have given rise to the manufacturing corridor of northern Mexico. The U.S. mining, oil, and agricultural transnationals use Mexican resources to make massive profits and provide the only jobs available to many Mexicans. The entire Mexican economy is built on these U.S.-based investments and companies. In this context, migration is a structural consequence of this deep form of imperialist penetration expressed in three policies mandated by the U.S. government: the war on drugs, militarization and NAFTA.

The War on Drugs

Goods, capital, and people constantly cross the border, but some are legal and some are not. This constant flow gives the illegal economic sectors—the narcos—unique characteristics and power. Specifically, the U.S. demand for immigrant labor, sex trafficking, and drugs has created a powerful economic niche that exists at the margins of the state but is, at the same time, directly supported by the Mexican state.

Organized crime groups are the privileged distributors of cocaine and amphetamines to the United States. This demand has conferred exorbitant power on the Mexican cartels, who now operate as large global capitalist entities in several countries. Ultimately, the market for narcotics and other illegal industries quickly generates a massive amount of capital which is then put into circulation through money laundering.

Organized crime uses paramilitary groups to defend its market; at the same time, in association with the State, it carries out brutal violence against poor and working-class people. An infamous example of this was the murder and torture of 72 migrants in Tamaulipas in 2010, who had been handed over to the drug cartels by local police. Those who are part of the political opposition to the government, like the 43 Ayotzinapa students—who are still missing—are other victims of the Mexican Army, with the help of organized crime. The level of connection between the state and drug cartels is so strong that all of the state institutions are implicated via bribes or even directly as partners with the powerful drug lords.

At the same time, the response of the Mexican and U.S. governments to the growth of drug trafficking was militarization, which only increased the violence. These policies are direct impositions on the part of the U.S. government, which seeks to curtail the influx of drugs into the U.S. At the same time, this war on drugs has been used to discipline some cartels over others, chosen depending on the interests of politicians and military leaders.

The so-called “war on drugs” that has been waged in Mexico for 12 years was ordered by the White House under the instruction and operation of U.S. intelligence agencies and the armed forces. To this end, the Mérida Initiative was signed by the Mexican and the U.S. governments. The initiative is a security agreement intended to provide a legal framework for U.S. military intervention in Mexican territory which includes the direct participation of the U.S. on ground operations in Mexico and provides intelligence operations and military and intelligence training.

The results of this war on drugs have been devastating. Even the most conservative figures estimate that 160,000 people have been killed, 25 million have been displaced, and between 25,000 and 45,000 have disappeared; femicides increased 138% between 2007 and 2012.

The vast majority of the weapons in Mexico come from the United States—and there are a lot of them. The drug cartels rely on U.S. weapons to protect their products and businesses, and the Mexican government relies on U.S. arms to carry out the “war on drugs” and militarize the northern border. The U.S. arms industry makes massive profits from this relationship with Mexico.

President Trump wants to impose more restrictions on migration from Mexico and Central America, but at the same time wants to export high-tech weapons into Mexico without restrictions. As reported by The Intercept in April, senior representatives of the arms industry in the United States met with President Trump to come to an agreement that would most increase their profits. The representatives of this industries make up the Advocacy Trade Advisory Group, which advises the State Department on how to facilitate the export of weapons throughout the world. The companies who attended the meeting invest massive amounts of capital in Mexico, including representatives of Lockheed Martin, which sends Black Hawk helicopters to Mexico, and Textron, which owns Bell Helicopters, which are also purchased by the Mexican military. Also present was a representative of Nammo Talley, the company that sold more than 2,000 weapons to the Mexican Army for over $8 million in 2016.

These companies profit from the systematic intensification of the security system on both sides of the border.

Under NAFTA, the Mexican economy developed a manufacturing industry that depends entirely on transnational corporations. Massive foreign direct investment attracts capital due to very low-cost labor (even compared to Chinese wage levels) and the country’s proximity to the United States.

Despite Trump’s rhetoric against transnational agreements, it is clear that NAFTA has created massive profits for U.S. transnational corporations, and this has meant a higher level of precarization in labor conditions for the working class in Mexico, Canada, and the U.S. It has caused not only worsening labor conditions, but terrible living conditions as well as the looting and plundering of natural resources. In Mexico’s case, the Peña Nieto government is imposing structural reforms—such as the privatization of the oil and hydrocarbon industry—that involve massive looting of resources.

A call to action

In the face of Donald Trump’s brutal attack against migrants, it is imperative that the international left, workers, migrants and human rights take action and mobilize. In particular, socialist organizations on both sides of the border have the obligation to fight completely independently of capitalist parties. In the US, this means independence from the Democratic Party, which despite the rhetoric of some politicians, has been a central agent of imperialist policies in Mexico and anti-immigrant policies in the US.

But, we must go further and put forward an anti-imperialist program that responds to the migratory crisis: