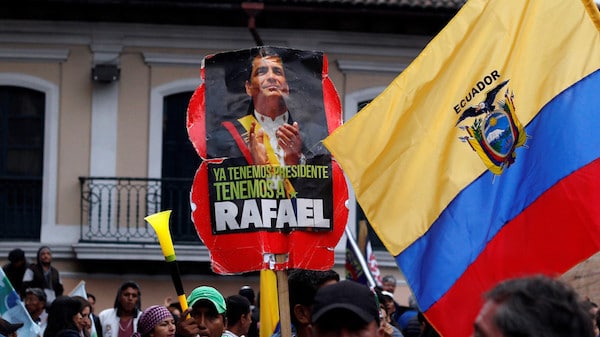 Ecuador’s National Court of Justice ordered the preventive detention of former President Rafael Correa on Tuesday. He is currently residing at his wife’s native country of Belgium. Correa is accused of being complicit in the failed kidnapping of right-wing opposition leader Fernando Balda.

The attempt to kidnap Balda was made in Colombia, where he was staying in exile to avoid prosecution in Ecuador over charges of being involved in a coup attempt in 2010 against the government presided by Correa. In less than two hours, he was rescued by the Colombian police.

In October that year, he was deported from Colombia for staying in the country without immigration permits, after which he was tried in Ecuador, and found guilty in January 2011. He was later sentenced to one year’s imprisonment.

The prosecution of Correa has to be seen in the context of his successor, Lenin Moreno’s shift in stance over the past one year, Moreno had initially positioned himself as the rightful candidate to carry forward Correa’s project of pro-people policies that were opposed to Washington’s interests in the region. However, he soon began deviating from it, leading to many protests in the country.

In January this year, an investigation was launched into Balda’s kidnapping based on his complaint, and two Ecuadorian intelligence officers were detained in March over suspicions of their involvement.

In May, Paul Perez was appointed the new Attorney General by a participation council, which Correa accused of being “unconstitutionally appointed.”

Soon, Perez alleged Correa was complicit in the kidnapping of Balda by approving public funds for the mission, which he urged the National Court of Justice to categorize as a “state crime”. The accusation is based on alleged mails exchanged between the intelligence officers suspected of being involved in the kidnapping and the office of presidency, of which Correa was in charge of at the time.

Early last month the Attorney General requested the National Assembly, through the National Court of Justice, to authorize him to carry out a “criminal trial” of Correa within the next 72 hours. Pointing out that the body had the authority to lift immunity against a President in order to permit criminal prosecution, but Correa, who was no longer the President, enjoyed no such immunity, the National Assembly declared the request inadmissible, while in effect giving the green light.

Days, later on June 18, Daniela Camacho, judge of National Court of Justice (CNJ), linked Correa to the kidnapping case, and ordered that he must present himself before the Justice in the capital city of Quito every 15 days, starting from the 2nd of this month.

The prosecutor links me to the Balda case without any valid reason, asks that I appear periodically before the diplomatic headquarters in Europe…and the judge CHANGES the preventive measure to appearing every 15 days…in Ecuador! What is this?

On July 2, Correa presented himself at the Ecuadorian consulate in Brussels, and submitted a letter stating,

As a former president, it is my wish to comply with the procedural demands, despite being evident the political and judicial persecution that I have suffered in recent months, I would like to very courteously ask you to certify that I have presented myself at the Consulate of Ecuador to the Kingdom of Belgium, today, Monday, July 2, 2018, at 11:00 hours.

At the Ecuadorian national court, Correa’s lawyer, Caupolicán Ochoa, “justified the decision of former president to present himself…before the Consulate in Belgium. He pointed out that his defendant could not attend the court in Ecuador, because his daughter is ill. But, at the discretion of the judge, these actions were not duly substantiated, because the documents were not notarized and the name of former president’s daughter was not properly written,” Resumen Americano reported.

Ochoa also appealed to the judge to review the preventive measure against the ex-president which requires him to appear in the national court every 15 days, and permit Correa to present himself in the Ecuadorian consulate in Brussels instead.

Dismissing his appeal, the judge admitted the petition of the Attorney General, who, arguing that Correa had failed to comply with the judge’s order, asked the court to request Interpol to arrest and extradite Correa to Ecuador.

Questioning the judge’s decision to concede the Attorney General’s petition, Ramiro Garcia, the President of Pichincha’s Lawyers Association, said that, in his view, Correa’s presenting of himself at the consulate “was enough to verify the compliance of the judge’s order…[I]t makes no sense to ask a person to cross the world to appear (before court) for five minutes when there is a consular delegation there.” Only after Correa is called by the judge to testify, is he under compulsion to appear at the court, he opined.

It will take about two weeks for Interpol’s red notice to take effect. In the meantime, Correa’s defense will be appealing against the judge’s decision, on the grounds that Correa is being “politically prosecuted”.

“If I return to Ecuador, I have no assurance that I would remain free…They give me an impossible condition to comply with an unreasonable order and, if I fail to comply, they could place me in pretrial detention,” Correa said, adding,

They are forging evidence because they have absolutely nothing against me. This case was already adjudicated in Colombia and now they want to open it again in Ecuador based on lies.

Applying for asylum in Belgium “is one of the alternatives I’m thinking about although nothing has been decided,” he said, accusing “traitors and enemies” of Ecuador of forcing him to consider the option.

Fernando Balda has said that he will travel to Brussels and present at the Ecuadorian consulate a “dossier that includes Correa in his case”, Andes Info reported. “If these countries decide to grant asylum to those (Correa and Romero) who have committed serious States crimes, then that’s up to those nations,” Balda has said.

Supporters of Correa protesting in Ecuador against the court’s decision believe that what is happening in the country is an application of the Brazilian model of using a compromised judiciary to persecute the stalwarts of the left in Latin America.