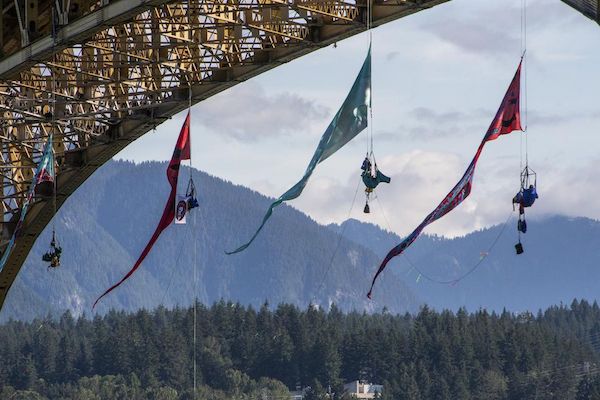 Seven climbers have rappelled from Vancouver’s Ironworkers Memorial Bridge and are blocking the path of a tar sands oil tanker, Serene Sea, currently docked at Kinder Morgan’s Trans Mountain pipeline terminal. The tanker was scheduled to leave port this morning.

The climbers are flying vibrant red and teal streamers featuring artwork by celebrated Indigenous artists resisting the Trans Mountain Expansion pipeline and tanker project (TMX), including Jackie Fawn, whose art became iconic during the protests at Standing Rock.(1) Five more climbers are supporting the blockade from the bridge catwalk. Greenpeace Canada is supporting the climbers as they take action.

“Our message to the world is that climate leaders don’t buy pipelines. Our communities will continue resisting dirty tar sands oil every step of the way. We urgently need to protect these waters because this tanker superhighway threatens the entire coast down to California. We are taking action today to defend water, health, and the climate—and we aren’t alone. Hundreds of thousands of people from around the world are standing with us. Prime Minister Trudeau, it’s time to choose on what side of history you will stand,” said Mary Lovell, a Greenpeace Canada spokesperson and climber from Seattle, Washington.

The blockade is made up of climbers from around the world, including the Coast Salish community, the UK, the U.S., Mexico and throughout Canada. Coast Salish unceded territories include the British Columbia coast and Salish Sea at the end of the proposed TMX pipeline.

“I will remain the fierce opposition. It is in my blood to protect the water. Our Indigenous rights are being completely ignored, the safety of our water is being ignored, and most of all my son’s future is at stake. I will do whatever it takes to protect the water and my family and your family.” said Will George, a climber and an Indigenous Coast Salish member. He is also the spokesperson and leader of Kwekwecnewtxw.

The climbers are planning to raise six banners reading “Protect Water #StopPipelines,” “Protect Water” and “Protect the Salish Sea” in different languages.(2) They aim to highlight the threats to clean water posed by tar sands oil spills from the TMX pipeline and the 400 tankers it could bring each year to load up at the marine terminal and transport oil through the Salish Sea to refineries all along the U.S. coast.

The climbers also plan to raise banners reading “Trudeau or Crudeau: Choose”, “Don’t bank on pipelines”, and “Respect Indigenous Rights,” sending a message to Canada’s Prime Minister, whose government is prepared to spend billions of dollars of public money purchasing TMX, which was abandoned by Kinder Morgan in the face of growing public opposition. The message extends to the builders and financiers of other controversial oil and gas pipelines across North America, including any considering backing TMX.

In recent weeks, more than 200,000 people from around the world have joined Greenpeace’s global campaign calling on 12 major global banks (“the Dirty Dozen”) to commit to stop financing dangerous oil and gas pipelines. This includes three proposed pipelines that would expand Canada’s tar sands (TMX, TransCanada’s Keystone XL, Enbridge’s Line 3) and those proposed by Energy Transfer Partners, which has launched a meritless USD $900 million lawsuit against Greenpeace USA, Greenpeace International and other groups, designed to intimidate and silence critics.