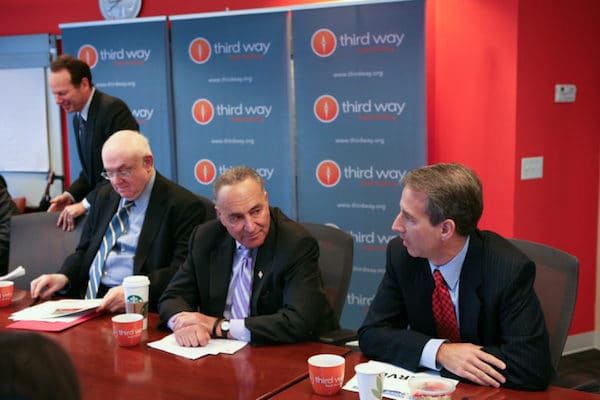 Democratic Party elites are increasingly concerned the midterm elections will be a “base election” and make their centrist politics even more irrelevant, as insurgent candidates like Alexandria Ocasio-Cortez garner widespread support.

The think tank, Third Way, recently held a conference in Ohio with Democrats, who primarily adhere to the politics of President Bill Clinton, and new recruits, who they hope will counter “Bernie Sanders-style socialism.” They also intend to defend corporate executives and wealthy people from condemnation for their attacks on poor and working class Americans.

“Right now, in the Democratic Party, there is only one option on the table: Sanders-style socialism. That’s the main option on the table. We’re doing this now because the party’s got to have a choice,” Jon Cowan, one of the presidents of Third Way, declared.

“So we’re actually doing this for a very straightforward reason: to stand up and launch a serious, compelling economic alternative to Sanderism,” Cowan added.

The only narrative that has been articulated in the Democratic Party over the past two years is the one from the left.

“I think we need a debate within the party. Frankly, it would have been better to start the conversation earlier,” Markell said.

Democratic Representative Tim Ryan of Ohio earned laughs when he quipped, “You’re not going to make me hate somebody just because they’re rich. I want to be rich!” The line went over well because Third Way and the 250 insiders that attended the conference have deep ties to hedge funds and various financial institutions on Wall Street.

As of 2014, “Two-thirds of its 31 trustees [had] held senior leadership positions in investment funds or big banks or served in some other capacity on Wall Street.” However, corporate Democrats bristle at the notion that their money ethically compromises them. Hillary Clinton even went so far as to defend her speeches to Goldman Sachs by accusing critics of misogyny.

Mitch Landrieu, a pragmatic liberal and former mayor of New Orleans, warned during the conference,

Republicans have chosen their [path]. They’re going to run a base election, which means they have ceded the middle of the road. In my opinion, Democrats would be making a big mistake if they run a base election. We have to find common ground.

The strategy of finding “common ground” is one the establishment of the Democratic Party has touted for the past few decades, particularly to ward off left-wing populist challenges. It was adhered to by Hillary Clinton in 2016, President Barack Obama embraced it as a core philosophy in 2008 and 2012, and Bill Clinton, along with Al Gore, perfected the art of making common cause with corporate interests to maintain power and influence in the United States government.

As Lance Selfa detailed in his book, “The Democrats: A Critical History, ” Clinton and Gore broke with labor, civil rights, and other liberal causes to push for the North American Free Trade Agreement (NAFTA). They backed welfare repeal, bills which fueled the rise of mass incarceration, and signed a 1997 budget that slashed millions for social programs, like Medicare and Medicaid. They put corporations ahead of protecting the environment. They encouraged the deregulation of industry, which greatly boosted Wall Street.

This tradition continues with former Labor Secretary, Tom Perez, as the head of the Democratic National Committee (DNC). Perez was a major proponent of the Trans-Pacific Partnership agreement. He granted waivers for UBS, Barclays, J.P. Morgan, the Royal Bank of Scotland Group, and Citigroup while he was Labor Secretary, which allowed the banks to go back to managing pension money even though they were guilty of crimes. He also refused to support a revival of Obama’s ban on donations from corporate lobbyists.

The Democratic Party managed to defeat a strong challenge from Representative Keith Ellison, who represented Sanders on the DNC’s Platform Committee in 2016. So, Cowan’s suggestion that Democrats have veered from his preferred course is far-fetched. But it does indicate the leadership of the party still views a coalition of progressives and democratic socialists within the party as a threat.

Landrieu’s fear of a “base election” is striking, given the fact that such an election is what Democrats need to bolster voter enthusiasm for candidates in November so they can potentially take control of the Senate and/or the House of Representatives.

Also, the leadership of the Democratic Party did everything it could to prevent a “base election” from taking place in 2016, when Sanders gained momentum against Clinton. It took steps to aid Clinton so she would remain the inevitable nominee. Clinton ran a poor campaign that promoted centrist politics as a counter to President Donald Trump’s right-wing populist message and lost the election.

“Conor Lamb won with a message that I think is a Democratic message: The tax bill was not for you. They’re trying to take your health care away,” Hoyer said.

Clearly, what we found in the polls was, [voters] will listen, they’re not happy.

Indeed, the tax bill was not for most Americans. It was for corporations and wealthy elites. They plan to take Americans’ health care away to pay for their tax cuts. But that message is not one that meshes well with the center-right politics of corporate Democrats. It is truly a message to be bolstered by the socialist politics of insurgent candidates.

The Democratic Party has floundered throughout Trump’s presidency because it refuses to articulate an alternative vision to Trumpism that addresses the material conditions which many Americans endure. Among Sanders Democrats, there is an alternative vision with grassroots energy that could be seized. However, Clinton Democrats cling to the role of sensible steward for corporate elites so tightly that they will not embrace critiques of capitalism and offer policy solutions that address root causes of systemic problems.

As a result, what Third Way proposes is a set of bland focus-grouped policies, such as

a massive apprenticeship program to train workers, a privatized employer-funded universal pension that would supplement Social Security, and an overhaul of unemployment insurance to include skills training.

The emphasis on training workers is indicative of centrist Democrats compulsion to triage the impacts of capitalism on poor, working class, and middle class Americans rather than support measures that could lift up the 99 percent.

In fact, Senate Minority Leader Chuck Schumer suggested in an op-ed for the New York Times in 2017 that employers, “particularly small businesses, a large tax credit to train workers for unfilled jobs.” He contended this “Better Deal” would help Americans in “smaller cities and rural areas, which have experienced an exodus of young people who aren’t trained for the jobs in those areas.”

It was like a proposal Hillary Clinton put forward during her presidential campaign in June 2015. She called for tax credits for businesses for “every apprentice hired as a way to boost employment among young adults.”

Schumer’s announcement ultimately flopped. The Democrats scrapped the “Better Deal” message last week. They now believe, based on their most politically connected public relations consultants, that “For the People” is better. But what that means for policy is anyone’s guess.

Other ideas touted by Third Way include a “small business bill of rights” and “BoomerCorps,” a national service program where seniors can earn money to supplement their dwindling Social Security payments.

The idea of “BoomerCorps” is rather offensive. It basically says to Americans, who have labored for decades to fuel the U.S. economy,

Hey, why not break your back some more for America if you really want to retire?

Nevertheless, the narrative pushed by Clinton Democrats into the media should not fool anyone into believing they cannot get their message out, that voices in the party have drowned them out, or that Sanders Democrats had a “head start” and now they must battle their way back to challenge them before they cost Democrats seats in the midterm election.

These Democrats are the very individuals who collectively shepherded Hillary Clinton to a presidential nomination. They have fended off an insurgency for the past two years and stunted efforts to develop the Democratic Party into an actual opposition party that will meaningfully challenge Trump. They have responded to dissent against Trump by complaining that “incivility” is not the answer. They even will go so far as to accuse Sanders Democrats of dividing Democrats by running challengers against incumbents.

Clinton Democrats or followers of the Third Way still have the power, and that is part of what is holding back an agenda for working people. They stand in the way of a movement that believes the country should move away from destructive corporate politics, and until their obstruction is overcome, progress on economic, environmental, racial, and social justice will be exceptionally difficult to achieve.