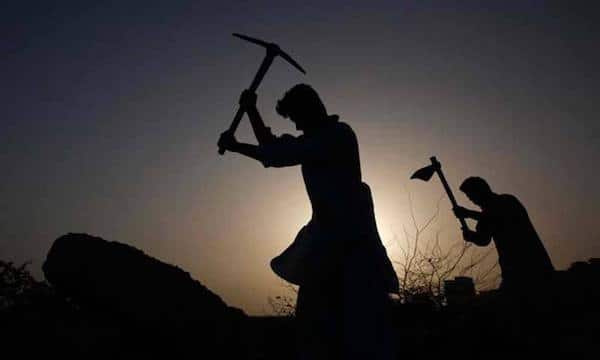 CAPITALISM’S discourse on “development” which has become quite influential all over the third world in the neo-liberal period proceeds as follows: (i) “development” must consist in shifting the work-force from the traditional (petty production) sector which is overcrowded with low labour productivity, and hence constitutes a repository of poverty,  to the modern (capitalist) sector which has much higher labour productivity. (ii) For this shift to occur, the modern (capitalist sector) must be allowed to grow as rapidly as possible, for which all impediments to capital accumulation must be removed. (iii) Even if, in the process of the modern (capitalist) sector’s growth, some petty producers are displaced, such as for instance owing to the acquisition of land from peasant agriculture for building factories, then that can only be a transitional problem and should not be a matter of much concern, since the entire work-force from the petty production sector will eventually get absorbed into the capitalist sector anyway. Hence preventing the growth of the capitalist sector in the name of protecting the petty production sector constitutes a retrograde step; it may be necessitated for “political” or “populist” considerations but it lacks any economic rationale.

This discourse is typically justified with reference to the experience of Western Europe, where the capitalist sector came up through a process of primitive accumulation of capital (of which the “Enclosure Movement” in England in which common land was “enclosed” by landlords to exclude peasants from using it and thereby to render their economy unviable, constitutes a classic example); the displaced petty producers, though they underwent great suffering during a period of transition, were eventually absorbed into capitalist employment. This experience, it is argued, will only be repeated in third world countries like India where a similar process of capitalist development is currently underway.

It is also justified with reference to elementary economic theory: since the existence of an overcrowded traditional petty production sector keeps wages close to a subsistence level, not too much above the per capita income of this sector, even in the capitalist sector, where the output per worker is much higher, the surplus per unit of output in the capitalist sector is correspondingly much higher. If this surplus is invested, for which conditions favourable to capital accumulation must be created, then the capitalist sector will experience high growth that will necessarily draw the work-force away from the traditional petty production sector; and as the work-force gets drawn from that sector, wages will rise in the capitalist sector putting an end to poverty in the economy. What third world economies need for their “development” therefore is to create a favourable climate for capital accumulation, to boost the “animal spirits” of the capitalists; this will ensure an end to poverty.

We shall come back to this issue later, but let us now look at the historical argument about Western European experience. It is wholly erroneous to suggest that the petty producers displaced by Western European capitalism were absorbed as workers within it. Vast numbers of them who were displaced in the colonies, semi-colonies and dependencies by the free import of metropolitan goods, remained there as a pauperised mass; in fact “modern mass poverty” which consists not just of low labour productivity but above all of economic insecurity has its origins in this process of displacement that was never followed by any absorption into capitalist employment, since the capitalist sector in these economies remained for long a minuscule entity.

But even when we talk of those displaced within the metropolitan economies themselves, they were not absorbed into employment by metropolitan capitalism. They emigrated in large numbers to the temperate regions of European settlement, such as Canada, the United States, Australia, New Zealand and South Africa, where they could oust the local inhabitants from their land and set themselves up as farmers. It is this emigration, estimated at 50 million persons in the “long nineteenth century” (ending in the first world war), which kept European labour reserves in check, made successful trade unions possible, and raised real wages alongside labour productivity, thereby making a dent on poverty. It is not any inherent tendency of capitalism to absorb into its employed work-force all those whom it displaces, that underlay the European experience but large-scale emigration, the scope for which no longer exists for today’s third world populations. (The plight of the refugees coming into Europe today amply demonstrates this).

Hence the discourse propagated by capitalism on “development” is neither theoretically nor historically valid. But there is more to it than that. Suppose the growth of employment in the capitalist sector falls short of the natural growth rate of the work-force, as suggested above, then, since labour reserves would grow rather than shrink, the real wages in the capitalist sector would continue to remain at the subsistence level; but since labour productivity in this sector would be growing (which after all is the basic reason why labour reserves do not get depleted in the first place), the share of surplus in the capitalist sector’s output would be increasing.

Now those living off the surplus in a third world economy, typically emulate the life-styles prevailing among the affluent in the metropolis, which requires commodities that are less employment-intensive than the commodities demanded by the working people of the third world. Hence the growing income inequality within the latter economy causes a further rise in labour productivity and therefore  further reduction in the labour absorption capacity of the capitalist sector. This causes a further increase in income inequality, and so on. A vicious circle is thus set up whereby the capacity of the capitalist sector to provide jobs keeps dwindling over time. Even if the rate of output growth remains high and unimpaired (and we have all along deliberately abstracted from any problems of deficient aggregate demand in this sector, i.e., we have deliberately assumed the absurd “Say’s Law” that bourgeois economics assumes), the capitalist sector, if to start with it does not diminish labour reserves, can never do so. And what is more, when it does not do so, there is an aggravation of poverty in the economy compared even to what might otherwise have prevailed.

In other words, far from overcoming poverty through effecting growth, capitalism in economies like ours produces growth at one pole, possibly even high rates of growth, and an aggravation of poverty at another. This aggravation becomes even worse if the growth of the capitalist sector simultaneously causes displacement of petty producers, such as when peasant land is taken over for building factories, highways and other “infrastructure” schemes, not to mention real estate projects and golf courses.

This is not to say that factories and highways should not be built; but they create a problem within the logic of the capitalist trajectory of development. An intuitive understanding of this fact is what underlies the resistance among peasants and other segments of the affected population to the taking over of their land for various “development” projects.

It follows that capitalist “development”, no matter how rapid it may be, is incapable of overcoming poverty and unemployment in societies like ours. The case for an alternative development trajectory, alternative to capitalism, which defends and promotes petty production, raises its level of organisation through voluntarily-formed cooperatives and collectives (for which egalitarian land redistribution is a necessary condition), relies upon the public sector and this cooperative sector for undertaking investment and introducing technological progress (whose outcome then would not be the creation of unemployment), arises for this reason.

Such an alternative however requires a change in the class character of the State. It requires a State based on an alliance between the workers, including agricultural workers, and the peasants, and other sections of petty producers. But even in the period of transition before such a State comes into being, progressive forces must fight against the trajectory of neo-liberal capitalist development that only aggravates poverty in the economy, and make transitional demands that bring about and strengthen this class alliance.