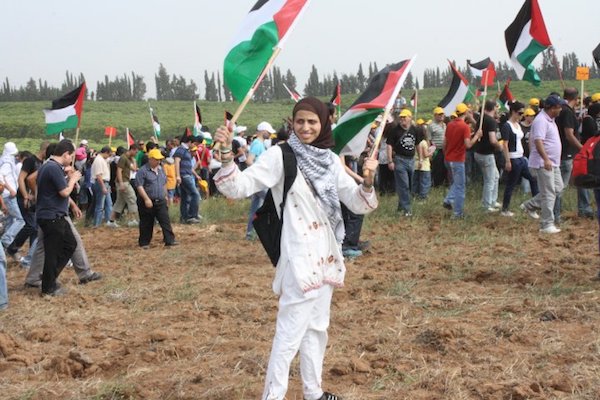 An Israeli district court sentenced Palestinian poet Dareen Tatour, 36, to five months in prison and a six-month suspended sentence on Tuesday for posting a poem she wrote to social media in 2015.

Tatour, a Palestinian citizen of Israel from the Galilee, was convicted of three counts of incitement and supporting a terrorist organization last May after a lengthy trial. Prior to sentencing, Tatour had spent nearly three years under house arrest, during which she was banned from publishing and accessing the internet.

During the hearing prosecutors focused on a video posted to social media of Tatour reciting an original poem titled “Resist, my people resist them,” against backdrop images of violent confrontations between Palestinian and Israeli armed forces.

The indictment against Tatour included a full Hebrew translation of Tatour’s poem, which her attorney argued mistranslated the original Arabic word for a “victim” to a “terrorist” from a stanza that was raised repeatedly during the hearing:

Cast them aside for a coming time./Resist, my people, resist them./Resist the settler’s robbery/And follow the caravan of martyrs.

Tatour was arrested by Israeli police in October 2015, a time when small-scale attacks, particularly stabbings, carried out by Palestinians against Israeli armed forces were on the rise in the occupied Palestinian territory.

At the time Israel launched a crackdown on alleged “online incitement” by Palestinians.

While Israeli leadership has boasted that the severe security measures and “Facebook arrests” have succeeded in reducing the trend of small-scale attacks against Israelis, a 2016 poll conducted by the Palestinian Center for Policy and Survey Research found that the decline in  support for such attacks were “due, it seems, to a rising perception in its inefficacy.”

Yoav Haifawi writing for Mondoweiss last week pointed out that even in its indictment against Tatour, the prosecution made a point to stress that during the period of Tatour’s post “many attacks were carried out against Israeli Jewish citizens”.

Tatour, her defense team, and supporters have argued that Israeli authorities grossly and intentionally misinterpreted her poem as a call for violence against the state, something Tatour has vehemently denied.

In an interview with Kim Jensen, Tatour said that her trial has led her to become “even more committed to liberating my people and my homeland from injustice and occupation.”

“The goal is to arrive at a state that includes everyone, based on the principles of justice and equality, without any concessions of our rights as Palestinian people living in the homeland in which we were born,” she said.

“How weak is Israeli democracy that today the court in Nazareth decided to convict the young poet Dareen Tatour for a poem she wrote. We will appeal to a decision after a sentence has been handed down,” Lasky posted on Twitter last May.

Haaretz reported in April 2017 that Israeli forces detained at least 400 Palestinians in less than a year over social media activity, and that 400 others were detained for the same reason by the Palestinian Authority through its policy of security coordination with Israel.

In contrast, the Arab Center for Social Media Advancement 7amleh documented in 2017 that slanderous, provocative, and threatening posts made by Israelis against Arabs and Palestinians more than doubled in 2016, reaching 675,000 posts made by 60,000 Hebrew-speaking Facebook users—without a single case being opened against an Israeli.

In a statement on Tuesday, 7amleh condemned Tatour’s sentencing, saying that her conviction,

Comes in the context of systematic attacks on Palestinian freedom of expression online by the Israeli government.

“The Israeli government has arrested hundreds of Palestinians in the past years, with the aim of intimidation and allegedly prevent any act of resistance to the policies of the illegal occupation and to prevent freedom of speech regarding the occupation, both in the West Bank, Jerusalem and Israel,” the group said.