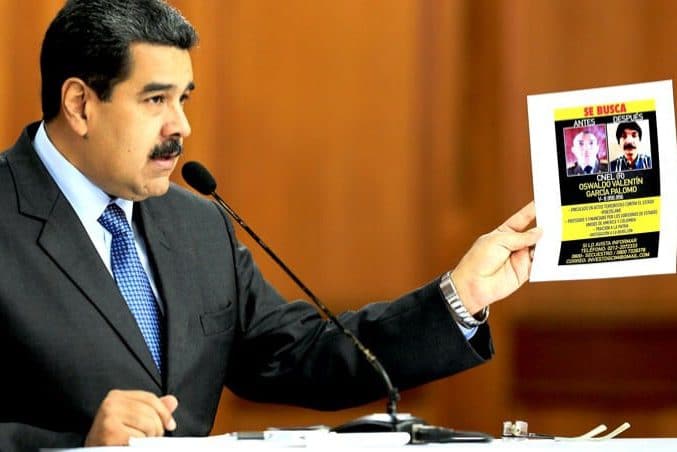 The attempt to assassinate Nicolas Maduro, president of Venezuela, has failed. This news is days-old but the facts are reiterated here starkly. The event raises serious questions for “progressive” critics now in close collaboration with imperialism.

The assassination attempt was made on August 4, 2018, while Maduro was addressing the nation on live TV during a celebration of the 81st-anniversary parade of the National Guard parade in Caracas.

The terrorists used drones loaded with explosives in the assassination attempt. However, snipers shot the killer-drones down before they reached Maduro. Seven National Guard members were injured in the incident. President Maduro said in a statement:

They have tried to kill me today, and everything points towards the right-wing forces, the Venezuela ultra-right in alliance with the Colombian ultra-right, and the name of Juan Manuel Santos is behind this assassination attempt. 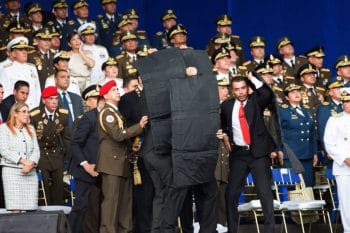 Manuel Santos is the outgoing president of Colombia.

The Venezuelan president said that the “first elements of the investigation point towards Bogota.” In a statement, the Colombian foreign ministry described Maduro’s indication as “absurd” and “baseless.” Santos claimed in an innocent tone that he was fully focused on his granddaughter’s baptism on the day of the murder-attempt.

However, Santos recently suggested in public statements that Maduro’s mandate is close to coming to an end. “I hope it is tomorrow even. Colombia would be willing and ready to help in any way possible,” commented Santos on July 30.

Some countries—Bolivia, Cuba, El Salvador, India, Iran, Nicaragua, Russia, Spain, Syria, Turkey, Uruguay, and Vietnam—immediately condemned the assassination attempt, and expressed solidarity with the Venezuelan leader. A number of Caribbean island-countries, the regional bloc of ALBA, and international groups—such as the Union of South American Nations, Community of Latin American and Caribbean Nations, and the World Peace Council—also repudiated the attack. The Communist Party of Argentina, the FARC in Colombia, Al Fatah, the Democratic Front for the Liberation of Palestine, the Popular Vanguard and New Nation Parties in Costa Rica, the Guasu Front in Paraguay, the New Movement Party and the Broad Front in Peru, and many other political and social organizations in regions and countries denounced the assassination attempt as well.

Maduro-allies including the Communist Party of Venezuela and Homeland for All Party (PPT), and grassroots organizations in Venezuela and in many other countries took a similar stand on the assassination attempt. Madure even found support from the football legend, Diego Maradona, who tweeted: “an attack on the leader of the Bolivarian Revolution is an attack on the people of Venezuela.”

Unsurprisingly, rightist opposition groups in Venezuela played down the assassination attempt; the ultra-rightists regretted the failure of the assassination. The First Justice party (PJ) indicated a similar attack may happen again: “It would be a grave error to presume…that the events of yesterday won’t be repeated in the same, or a worse, way.” Opposition hardliner Maria Corina Machado said: “Maduro will only be got rid of […] by force.”

A few of the rightists even claimed the incident was fabricated. On cue, apologists within the imperialist media also presented a story with a skeptical tone: “Was the attempt staged by Maduro?” Here the link between mainstream media and the right-wing is on full display.

While many countries claim to be protect civil rights and democracy, their ties to imperialism ensure silence in such moments. They predictably failed to denounce the assassination attempt, even after signing international agreements defining an attempt on the life of a head of state as a “terrorist act.”

An anti-government group calling itself “Soldiers in T-Shirts,”  composed of “military and civilian patriots” and “rebels,” claimed responsibility for the attack, code named “Operation Fenix.” Factors of Power, a Miami-based private news network, presented the statement, which echoed demands being made by the right-wing politicians that include abiding by the rightist-packed National Assembly’s call for “true and free” elections. The group called on “everyone to take to the streets,” to “take power,” and install a “transition government.” The assailants claimed that the assassination attempt was intended to “restore the constitutional order.” They also threatened to make subsequent attacks: “More such attempts will follow.”

Patricia Poleo, a Miami-based journalist and outspoken critic of the Venezuelan government, read the public statement issued by the claimants of the attempt. Poleo is accused of being involved in the assassination of anti-corruption police investigator Danilo Anderson in 2004.

Regardless of the admission, it would be foolish to accept the narrative that the attack was carried out by an unknown group of supposed ex-soldiers. As one commentator pointed out, the attack required significant infrastructure and trained personnel. It was also similar to drone attack schemes practiced in Syria on Russian bases. Most importantly, “drones may be sold freely on the market, but they are not sold full of powerful explosives, which is why this attack cannot be linked to radical opponents.”

Why attempt to assassinate Maduro?

This is not a new tactic for the right-wing in Latin America. For example, in Ecuador there was an attempt to assassinate then president Rafael Correa in 2010. And, of course, there is an unfortunately long list of political leaders who did not escape with their lives. Just to name the most prominent in Latin America: Jacobo Arbenz in Guatemala, Archbishop Oscar Arnulfo Romero in El Salvador, and Salvador Allende in Chile.

While not all of the political leaders who have been assassinated were explicitly anti-imperialist—merely getting in the way of U.S. profits is all that is required—thousands of anti-imperialist fighters have been killed as part of Washington’s centuries-long effort to protect its interests in Latin America. Any leader who chooses the path of self-reliance, of putting the interests of their people first, has become a target of imperialism. Those merely attempting to take small steps to move out of the imperialist orbit have also been targeted. Those at the top of the imperialist hierarchy even have no problem targeting their own assets, allies, and lackeys when they have outworn their usefulness.

Many leaders have been overthrown through in coup d’états. Assassination by being shot or killed in some mysterious accident (a few have been blown out in airplanes) has been the preferred method for most of imperial history. However, some newer methods now in vogue include either “forced exile”—most recently in the case of Jean-Bertrand Aristide in Haiti—or ousting by a “democracy movement,” the latter being nothing more than very well-funded marketing campaign.

Assassination attempts are made when imperialists fail to find scope for regime change through fabricated political “movements,” which appear democratic but at their core are faithful to imperialism. However, in some cases it is not possible to mobilize social and political forces strong enough to overthrow the targeted political leaders, even with the help of a manufactured crisis (typically through economic strangulation). When these tactics fail assassination becomes a much more likely option.

In assassination attempts, imperialism has historically relied on its fabricated political movements—the local political lackeys. These allies range from political parties, disgruntled elements within the targeted government and business unions, to mainstream NGOs focused on various social services. It is a mobilization of social and political forces that—wittingly or not—is faithful to an external master.

In Venezuela, rightists are finding it difficult to succeed with their political fight. They are failing miserably to mobilize other social forces, utilize existing pockets of discontent, or provide any sort of inspiration. The situation leads them to terrorist activity, and their increasingly violent tactics have been supported by U.S. and (most) international media without question. Given this context, it should come as no surprise that an assassination attempt has been made. It is an indication of the rightists’ failure in the political fight, as repeated losses fuel ever more desperate tactics.

Clearly the situation is charged but politics and political position are not static in any society. It is absurd to expect that the policies of Chávez, and now Maduro, could have been be error-free considering the circumstances. From the history we have of any society attempting to fight the regime of capital, it is clear that the struggle will be long and difficult, especially without the support of a large block of allied countries.

Yet there are “progressives,” “leftists,” “adherents” of Marx and Lenin who claim Chávez and Maduro haven’t followed the “correct” path to socialism. These commentators, mainly from the global North, often refer to themselves as anti-imperialists. Yet they routinely fail to acknowledge in their criticism that imperialism is not making an assault on their countries, and on their persons, but on those of the periphery. In the case of Venezuela, imperialism has targeted Chávez, Maduro, and the Venezuelan people. Failure to take this fully into account leads to failures in analysis—even in some cases subordination to imperialist ideology itself. These so-called “anti-imperialists” would do well to remember an observation made by Mao in 1939:

These “progressives” see themselves as more adept revolutionaries than Mao, or even Lenin for that matter, so they ignore them. They do not appear to know who the enemy actually is; if they did, they would never even appear to be extending their hands in collaboration with the lackeys of imperialism.

These “progressives” very often take the path that has been charted by imperialism. In a number of countries and regions (including South Asia), they stand with the rightist forces, arguing that they must take a principled stance against the errors, corruption, and economic difficulties of a given government—even though the problems are often generated by imperialism itself. They come to befriend those extreme rightists with the most social cache, seeing themselves as a positive force in the effort to build imperialism-inspired “democracy.” But they will never consider the question: What lies behind the attempt to assassinate Maduro? What makes him and the movement he represents different?

Most of the information used in this article is from Venezuelanalysis and Granma. The following list includes some of the sources along with further reading.