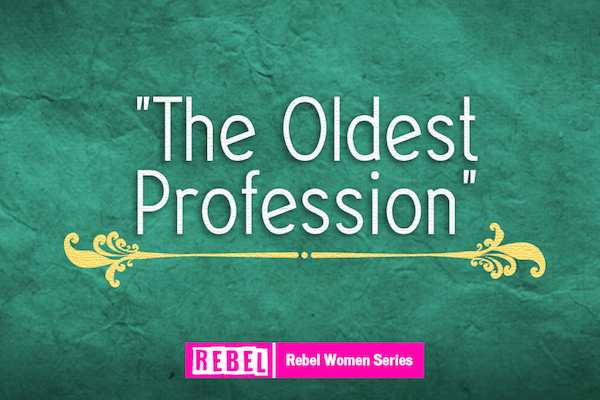 In the second installment of our subseries Rebel Women, Madeleine Johansson gives her thoughts on the topic of ongoing debate, sex work, and how we on the left should relate to it.

The debates around sex work have changed significantly over the last hundred years or so; from the moral outrage and criminalisation of the Victorian era to the horrific ‘psychological and genetic inferiority’ theories of the early to mid-20th century. Today, debates from feminists, progressives and leftists is mainly between those who campaign for the full legalisation of sex work and those who campaign for the partial criminalisation of the industry. It is possible to take a nuanced position which isn’t simply moralistic condemnation of sex work, nor uncritical support of the sex industry given the conditions which sex workers have been very vocal about.

First I want to make a note for clarity regarding gender in this article; where I use “she/her” for sex workers and “he/him” for sex purchasers, I am recognising the fact that the vast majority of sex workers are women, and most who purchase are men. I am not ignoring the fact that people of other gender identities are sex workers, and people other than men purchase sex.

There has been a movement in Western Europe to criminalise the purchasing of sex while decriminalising the selling of sex – a system first introduced in Sweden in 1999. Mainstream feminists argue that this protects women in sex work, by removing the threat of criminalisation to them, while still punishing the men who buy sex. This, however, often disregards the unintended consequences of this law. It has been proven to reduce visible sex work on the streets, as was one of its intended purposes, but it has only served to push the industry underground. The sex workers operating in countries who have implemented these measures are themselves taking measures to keep their customers away from strong arm of the law, which in turn means that it becomes more hidden. Another consequence is that it prohibits the reporting of abuse experienced by sex workers to the police, as well as making it more difficult for the authorities to engage with sex workers on issues of safety, because there is a possibility of criminal repercussions for their other customers.

It’s not only mainstream feminists who favour this type of legislation, but also some self-proclaimed Marxists such as Swedish activist Kajsa Ekis Ekman, author of the book ‘Being and Being Bought: Prostitution, Surrogacy and the Split Self’. Her argument, while making ground breaking and valid points about sex work and alienation, boils down to a moral conviction about the need to end ‘prostitution’ since it is a symptom of ‘patriarchy’. Instead of understanding the historical nature of the oppression of women and its origins in class society, and seeing sex work as a particular form of this, she seems to argue that sex work should simply be eradicated by convincing men that it is immoral. Criminalising the buying of sex is therefore part of that process. However, even as a means to curb sex work, in practice, this type of legislation has been a complete failure. In 2016 it was reported that 1 in 10 Swedish men have bought sex at some point.

In Ireland the campaign Turn Off the Red Light successfully promoted this Scandinavian model of criminalising the purchase of sex and it was put into law in February 2017. The campaign was supported by a number of mainstream and liberal organisations such as the National Women’s Council, the Irish Countrywomen’s Association and the Irish Labour Party. Unfortunately the consequences of this have further driven sex work underground and caused harm to sex workers.

Sex sells–the commodification of our bodies

The backdrop to this debate is that the sex industry is one of the largest industries in the world. Advances in technology have made it possible to instantly access all kinds of commodities, including sexual commodities. The commodification of sex, and particularly of women’s bodies, is a particular symptom of capitalism–a system which turns everything, including the most intimate part of human life, into products that can be bought and sold on the market. Regardless of whether it is legal or not, there is enormous profit to be made.

This billion dollar industry has a dark underbelly of horrific abuse, trafficking and slavery. The victims of trafficking are mostly women of colour from the poorest countries in the world. They are kidnaped, lured or forced by circumstances to a life of abuse at the hands of mostly middle aged white men. These activities should obviously be illegal and treated as serious crimes, and the women who become victims should be supported in all possible ways including given immediate leave to remain in the country they have been trafficked to.

By comparison, there are many women who choose to sell sex, whether because of economic or social circumstances or merely by choice.

The organisation of sex workers

Just like all other workers, those willingly engaged in sex work suffer exploitation and oppression. The lack of rights enjoyed by sex workers in particular and the often dangerous working conditions at the hands of pimps, owners of establishments or, if self-employed, the threat of danger from customers or others such as landlords from whom they rent spaces, are endemic. The difference to other workers is that where sex work is criminalised, it makes it extremely difficult for sex workers to organise and to fight back for better and safer working conditions.

Therefore, sex workers should be supported in their attempts to self-organise to demand better conditions. Kajsa Ekis Ekman points out some serious problems with some sex worker organisations in which memberships includes sex industry owners and others who profit from the industry. This is obviously problematic since it limits the fight for better conditions. However, this should not automatically lead socialists to take a position against the organisation of sex workers but rather it should make us recognise the need for socialists, feminists, workers rights activists and others to stand in solidarity with sex workers who are trying to organise independently and help increase the class consciousness of all workers, including sex workers. This means firstly accepting and supporting them in their fight to be recognised as workers.

Some would argue that the acceptance of sex workers as workers automatically means that you must recognise sex work as work like any other, which ignores the specificities of sex work and its impact on the sex worker as well as the buyer. This is where alienation comes in.

Alienation is a key aspect of life under capitalism. Stemming from the separation of the worker from the products of her labour and from control over society, it manifests itself in a variety of forms, but it effects all human beings. Sex workers arguably experience a unique combination of two specific aspects of alienation; the alienation of human beings from the products of their labour and the alienation of human beings from themselves. In the case of sex work the product of labour being sold is not a separate object from the person themselves. Sex workers have told of how this can produce a dualism within the person, such as the creation in the minds of the sex workers of a separate entity, not their ‘self’ but a different ‘self’ that is engaging in sex work. This can be seen in the way that some sex workers set limits of contact allowed for their customers, often involving particular body parts such as the mouth. This has been described by sex workers as a way to divide their body and self into the ‘sex worker’ and the ‘person’.

It is not only the sex worker that suffers from alienation, there is also the alienation of the sex buyer. They experience the general alienation which we all endure under capitalism and try to find an escape from. For most of us, our attempts to escape alienation lead us to finding things we can control in our lives, such as our physical appearance. But it can also lead people to attempt to assert control or power over others, whether that be in the abuse of others or in this case, it could be the buying of sex from another person.

If this is the case, then this is precisely why the moral argument against sex work and the criminalisation of the buying of sex is futile, as well as being harmful to sex workers. Whilst we live under capitalism the circumstances which produce a market for sex as a commodity will continue.

Will sex work disappear under socialism?

Marxists do not have a crystal ball and we can’t predict what will happen in a socialist society. What we can know is that the circumstances, both the profit motive and alienation, which create a market for sexual commodities, will be gradually eradicated, and as Friedrich Engels wrote in ‘The Origin of the Family, Private Property and the State’:

What we can now conjecture about the way in which sexual relations will be ordered after the impending overthrow of capitalist production is mainly of a negative character, limited for the most part to what will disappear. But what will there be new? That will be answered when a new generation has grown up: a generation of men who never in their lives have known what it is to buy a woman’s surrender with money or any other social instrument of power; a generation of women who have never known what it is to give themselves to a man from any other considerations than real love, or to refuse to give themselves to their lover from fear of the economic consequences. When these people are in the world, they will care precious little what anybody today thinks they ought to do; they will make their own practice and their corresponding public opinion about the practice of each individual–and that will be the end of it.

Finally, it is absolutely possible, and in fact necessary, to support the decriminalisation of sex work and the self-organisation of sex workers, while also being critical of aspects of the sex industry, such as brutal exploitation and greed. We need to support sex workers fighting for their right to organise while also fighting for a different kind of society where sex ceases to be a commodity and sold on the market in the way that it is today, and where relationships are forged based on the mutual respect of all involved. The form of those relationships will be made by generations to come.