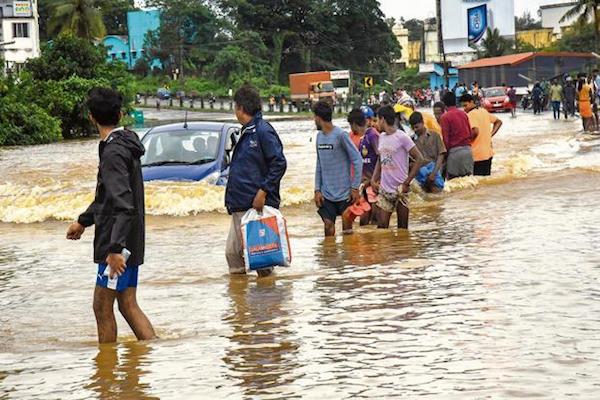 As heavy rains pound Kerala and overflowing rivers inundate most of the state, the increasing number of instances of extreme weather events in India have deepened concerns about the impact of climate change.

“Heavy rainfall used to occur in Kerala, but not with such continuity. This time, there has been widespread rain continually for a long time which has not been seen in recent years. However, we have observed that the intensity of daily rainfall is indeed increasing, especially along the western coast and in the north-eastern states,” said Dr D.S. Pai, head, climate prediction group, India Meteorological Department (IMD), Pune.

One such analysis done by IMD researchers has indicated increased disaster potential for instant flooding over central India, where the intensity and frequency of heavy and very heavy rainfall have been increasing.

“Our vulnerability to extreme rainfall is increasing as more people are living in low-lying areas and land development is changing drainage patterns. When there is more rain than the soil can absorb, water will quickly run-off overwhelming streams, drains and rivers, and causing flash floods,” said Dr Roxy Matthew Koll from Indian Institute of Tropical Meteorology, Pune, whose recent study in Nature highlighted that the number of extreme rainfall events have gone up by threefold in India.

According to the study, there have been 285 reported flooding events in India over 1950-2017 affecting about 850 million people, leaving 19 million homeless and killing about 71,000 people.

In its recent State of the Climate Report, the U.S.-based National Oceanic and Atmospheric Administration (NOAA) also raised concerns about the number of casualties in India because of extreme rainfall events last year. As many as 800 lives were lost in heavy rain and flood related incidents during the monsoon last year, it noted.

“It was expected that extreme weather events would increase because of climate change, and it is happening across the globe. India is more vulnerable because of its wide geographical and demographic variations. This makes it all the more important to strengthen our climate mitigation plans,” said Malti Goel, former advisor, department of science and technology and founder, Climate Change Research Institute, Delhi.

More than 40 million hectares or 12% of the country’s land is prone to floods and river erosion, according to the National Disaster Management Authority (NDMA), which says disasters seriously threaten India’s economy, its population and sustainable development, mainly because of its increasing vulnerabilities related to changing demographics and socio-economic conditions and unplanned urbanization.

Severe weather events have caused catastrophic loss of life and property across the country in recent years. Torrential rainfall caused floods in Jhelum and Chenab in 2014, causing nearly 400 villages in Kashmir to submerge. Chennai bore the brunt next year in November 2015, Assam in 2016. In 2017, Mumbai and Gujarat were forced to shut down because of record heavy rainfall.

Uttarakhand is yet to recover from the trail of destruction left by flash floods in June 2013, which was the country’s worst natural disaster since the tsunami of 2004.