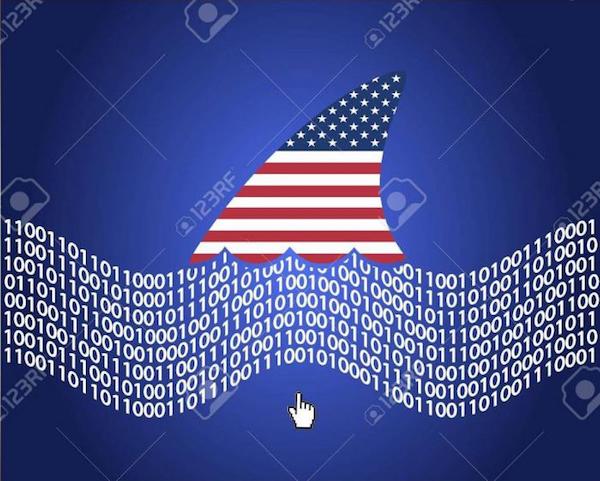 Of the 100 most popular websites in the region, only 21 have local content, thus once again our wealth is transferred to the United States. Photo- www.123rf.com

Once the internet became the central nervous system of the economy, research, news, and politics, the United States’ borders were extended across the planet. Only the U.S. and its corporations are sovereign, no other nation-state exists that could reshape the net by itself, to put a brake on Colonialism 2.0, despite local anti-monopoly laws and clear policies supporting sustainability on the social, ecological, economic, and technological order–much less build a viable alternative to disconnect from the so-called information society.

Very early on, Brazilian anthropologist Darcy Ribeiro warned that with the arrival of revolutionary technologies, “A true colonization is unfolding. The United States is playing its role with great efficiency, seeking complementarities that will make us permanently dependent on them,” adding, “Seeing this new civilization and all its threats, I fear that once again we will be peoples that do not gel-peoples that despite all our potential remain in second place.”

This scenario is linked to a program for Latin America and the Caribbean to control contents and the citizenry’s environments of participation, which is being implemented with total impunity, without the left paying even the slightest attention. In 2011, the Senate Foreign Relations Committee approved what is known in academic circles as an operation of “effective connectivity”–a plan outlined in a public Congressional document to expand use of new social media on the continent to promote U.S. interest in the region.

The document explains the interest in the continent’s social networks, “With more than 50% of the world’s population under 30 years of age, the new social media and technology resources that are so popular within this demographic group will continue to revolutionize communications in the future…Social media and technological initiatives based on political, economic, and social realities in Latin America will be crucial to the success of associated U.S. government efforts in the future.”

The plan summarizes the visit of a group of experts from several Latin American countries to the U.S. capitol to learn about policies and funding available in this arena, and concludes with specific recommendations for each of our countries that imply “minimizing critical risks of increased connectivity” for the United States, the leading government investing in infrastructure. The report noted that the number of social media users is growing exponentially, and that opportunities to influence political discourse and future policies are there for the taking.

What is behind this model of “effective” connectivity for Latin America? The vision of a human being as susceptible to domination via digital technology, and the clarity that so called social platforms are in no way neutral or providing a generic service, but are rather institutionalized and automated systems that design and manipulate connections, based on technological and ideological foundations.

What the U.S. government is projecting with its “operation” is the possibility that these tools create a simulated base and overthrow political systems that are not “convenient.” What role has it played in social media in the situations being faced today in Venezuela and Nicaragua, and in those we have seen previously in Bolivia, Brazil, Ecuador, and Argentina?

Only large corporations have the computing capacity to process the colossal volume of data we put onto social media, with every clic on a search engine, via our cell phones, debit cards, electronic chats, and emails. The accumulated tranches and data processed permit them to create value. More connections equal more social capital. But the fundamental interests behind open data and the invitations to “share,” “like,” or retweet, etc, are not those of users, but rather those of the corporations.

This power gives the proprietors an enormous advantage over users in the battle to control information. Cambridge Analytica, the London branch of a U.S. contractor devoted to active military operations online for more 25 years, has intervened in some 200 elections around the world. Psychological operations were its modus operandi. Its objective: change public opinion and influence not through persuasion, but via information control. The novelty is not the use of flyers, Radio Free Europe, or TV Martí, but rather Big Data and artificial intelligence to entrap every citizen who leaves traces of information on the web in a bubble that is observable, parametrically designed, and predictable.

Cambridge Analytica was involved in electoral processes in Argentina, Colombia, Brazil, and Mexico, working against left-wing leaders. In Argentina, for example, the company participated in Mauricio Macri’s 2015 campaign, creating detailed psychological profiles and identifying persons open to a change of opinion, with the goal of influencing them with fake news and partial selections of information. As soon as he took office, Macri approved a decree which allowed him to keep official bodies’ data bases for use in campaigns in his favor, one among many which allowed him to undermine the legal and institutional base of communications established by left governments in the country.

In Latin America and the Caribbean, politics have become techno-politics, their most cynical variant. Alexander Nix himself, Cambridge Analytica CEO, boasted to clients that things “don’t necessarily need to be true as long as they’re believed,” and emphasized an unquestionable, empirical fact: the decreasing credibility of commercial advertising is directly proportionate to the increase of publicity on social media, highly personalized and brutally effective.

Anyone who visits the webpage of Facebook’s associates (Facebook Marketing Partners) can discover hundreds of companies devoted to buying and selling data, and interacting with the blue thumbs-up company. Some have even specialized in geographical areas and countries, like the Cisneros Group, that participated in the 2002 coup against President Chávez in Venezuela, a reseller of Facebook that controls the advertizing market in 17 countries of the region.

WHAT IS TO BE DONE?

These topics are still far removed from professional debates and the programs of progressive movements on the continent. Speeches demonizing or enamored of the new technology civilization abound, but missing are strategies and programs leading to action to construct a truly sovereign information and communications model, and make new technologies our own.

We have not been able to concretize a fiber optic channel of our own, a dream of Unasur. Neither a systematic strategy or a consistent, reliable legal framework exist to minimize U.S. control; assure that traffic on the web flows between neighboring countries; promote the use of technologies that guarantee confidentiality of communications; protect the region’s human resources; and overcome obstacles to the commercialization of tools, content, and digital services produced in our back yard.

Nor has much progress been made on a common, supranational communicational agenda or platforms where it might be implemented. We need networks of observatories, which-in addition to gathering basic statistics and issuing alerts on the colonization of our digital space-would allow for the recovery and promotion of best practices in the use of these technologies and of resistance efforts in the region, on the basis of the understanding that the success or failure of challenges to these new inequalities depends on political decisions.

No country of the South by itself-and much less an isolated organization-can find the resources to challenge the power of the right that is mobilized with one click.

The debate over catastrophes and popular culture was transcended some time ago. The stable world described by Umberto Eco no longer exists.

There are several solutions on the horizon and one might be that of creating our own liberatory tools, but the search for and construction of such alternatives present more than technical-scientific problems. This route depends above all on collective action, in the medium and long run with both a tactical and strategic point of view, in favor of face-to-face and virtual communication that facilitates a change in social relations and technology to serve our peoples. Let’s do it, we don’t have much time.