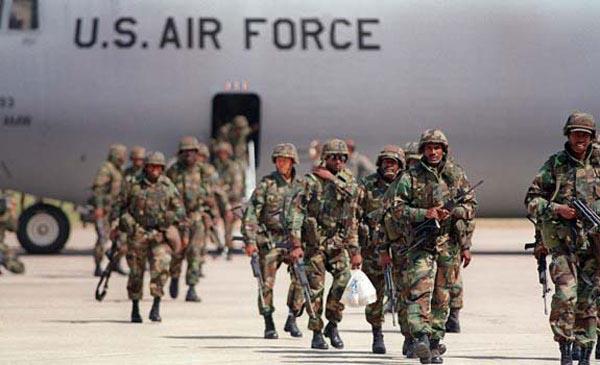 The United States has some 800 military bases around the world, and 76 of these are in Latin America. Among the best known are 12 in Panama, 12 in Puerto Rico, nine in Colombia, and eight in Peru, with the greatest number concentrated in Central America and the Caribbean.

In March of 2018, the U.S. Southern Command released information on its strategy for our region over the next ten years, the principle dangers and threats identified, and plans to confront these. Mentioned in this context were Cuba, Venezuela, and Bolivia; the struggle against drug trafficking; regional and transnational criminal networks; the greater presence of China, Russia, and Iran in Latin America and the Caribbean; disaster response (remember the “aid” given Haiti after the earthquake); as well as the role assigned to security forces in every country in terms of internal, regional, and international order.(1)

In February of 2018, the current commander of the Southern Command, Admiral Kurt Tidd, explained to Congress the scenarios foreseen on the continent, objectives, means, and strategies, as outlined in the 2018 National Defense Strategy and the 2017-2018 National Security Strategy.(2)

He acknowledged that, given the geographical proximity, commercial, immigration, and cultural closeness, there is no other part of world that affects daily life in the United States than Central America, South America, and the Caribbean.

The Admiral said that challenges to U.S. hegemony will be confronted via a network of friendly networks, operated by the Southern Command in conjunction with U.S, intelligence agencies and allies. Three joint task forces implement the plan, one called Bravo based in Soto Cano, Honduras; the Guantánamo task force; and the Inter-agency Joint Task Force in Key West, Florida.(3)

The planned U.S. response to any contingency includes defense of the Panama Canal; immigration control; humanitarian assistance and disaster response; plus unilateral, bilateral, and multilateral military operations, carried out in the event of any crisis.(4)

According to the admiral’s report, Cuba continues to threaten U.S. interests in the region, with surveillance and counter-intelligence activities in several countries. The clearest example he cited was Cuba’s influence on Venezuelan intelligence services and armed forces.

Colombia is a major actor in the region, especially given its new relationship with NATO. Colombia invested the equivalent of 3.1% of its GDP in military expenditures, approximately 9.7 billion U.S. dollars. This country’s military budget is the second highest in the region, surpassed only by Brazil. The third largest military spender is Argentina, which allocated 5.68 billion USD to its armed forces, equivalent to only 0.9% of it GDP.

Mexico’s military spending has increased notably over the last ten years, up 47.5% to reach six billion dollars, representing a bit more than 2.5% of it GDP. This increase has occurred alongside significant cuts in spending on science and technology, health and education.

The establishment of a U.S. military base in Neuquén, Argentina, contributes an interesting piece of information: in 2011 the YPF company discovered a giant oilfield in Neuquén, and in 2018, the U.S. announces the construction of a humanitarian aid base here.

The U.S. has divided the world in nine commands for its purposes, and the Southern Command for Latin America and the Caribbean includes this network of bases, plus the 4th Fleet, which is itself a series of operative bases, with a great geographical range, constituting a serious threat,

These bases are not only military, although all are in their essence. Many function as centers for the media and internet war. The Southern Command works jointly with the Geospatial Intelligence Agency and the Brazilian Armed Forces, and others, on a project to launch a southern Cyber-Container Initiative satellite: to detect malicious activity on the web, developed in conjunction with the Department of Homeland Security, the Defense Department, and the Federal Bureau of Information.(5)

Along with Admiral Kurt W. Tidd’s recent visit to Colombia was a multi-national meeting in Miami on maritime security. This was the second meeting, after a first in December of 2017, and a letter of intention was signed by the United States, Colombia, and Mexico, to protect their sovereignty in territorial waters and the exclusive economic zones of each country. This “maritime security” includes the Gulf of Mexico, as well as part of the Central American and Colombian Caribbean.

Over the last few years, Peru has become a key piece in the U.S. military’s expansion across the region, with the installation of bases in the Peruvian jungle and Regional Emergency Operations Centers.

While the Admiral was in Colombia, the country’s defense minister Oscar Aguad and that of Argentina Patricia Bullrich, were in the U.S. meeting with officials at the State Department, the FBI, the Drug Enforcement Agency, and leaders of the Southern Command. Argentina authorized the U.S. to establish a base in their territory on the triple border shared with Paraguay and Brazil, while Bullrich signed an agreement to create a Regional Intelligence Center in Usuhaia, Patagonia.

Noteworthy in January of 2018 was the arrival of U.S. military personnel in Panama, forces that stayed there through the end of Venezuelan elections, under the pretext of “protecting the Panama Canal.”

The siege is tightening. The war the United States is waging against Venezuela needs regional forces to intervene not only economically and politically, but militarily as well.

Another brewing danger is renewed U.S. intervention in Ecuador’s national sovereignty, directly and indirectly in the armed forces and the national police, facilitated by the government of Lenin Moreno, that includes the offering of training, intelligence, access to U.S. military academies where Ecuadoran offices can be “educated,” in addition to U.S. personnel on the country’s soil under the pretext of fighting drug trafficking and terrorism.

Lieutenant General Joseph P. DiSalvo, number two in the Southern Command, visited Ecuador to meet with high-ranking authorities to “coordinate” joint activity, saying in a local interview that a new strategy must be developed, going beyond the Colombia Plan to become a South American Plan, in which everyone can join forces.

The reemergence of the Monroe Doctrine, evoked by Tillerson when he warned of the threat to U.S. democratic values represented by the commercial presence of China and Russia in the region, is a sign of the continued influence of the most aggressive line of imperialist thinking.

The empire’s objective is to increase its military presence in the region to safeguard its hegemonic interests in the hemisphere, consolidate a hostile front against Venezuela, and perpetuate its dominion over the immense economic resources of Latin America and the Caribbean.

The United States appears to be destined by providence to plague America with misery, in the name of freedom.