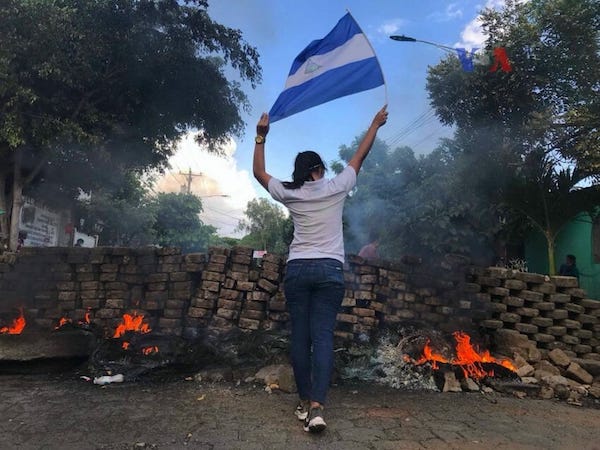 Well, let me revise that: Very few care. English teachers may care because they may find it fascinating the phrase “violent coup” is one of the only English phrases often introduced with the prefix “U.S.-backed.”

But I can tell you for certain the mainstream media don’t want you to care. They don’t even want you to know it happened. And they certainly don’t want you to know that it followed a simple formula for U.S.-backed coups in leftist and anti-imperialist nations throughout Latin America, a formula our military intelligence apparatus has implemented in numerous countries tirelessly, like an overused football play.

On the corporate airwaves you won’t hear about U.S.-backed anything. If the U.S. military backed up a truck, CNN wouldn’t mention it, NPR would tell you the truck was dealing with an “organic internal protest movement” and Fox News would blame a black person.

Back to Latin America. The U.S. has had a long policy of undermining, infiltrating and bringing down any Latin American government that doesn’t line up with our unfettered capitalistic neoliberal policies. If a leader says, “Hey, let’s live a different way in which everyone is taken care of and we help out our brothers and sisters,” then the U.S. will make sure he or she ends up wearing cement shoes at the bottom of a lake somewhere. (And those cement shoes won’t even be crafted by union cement workers because all the unions have been destroyed. So you’ve got freelance underpaid children making the shoes—probably part of the “gig economy” with some sort of cement shoe app that tricks cement layers into working for pennies because they don’t understand the algorithm is screwing them hard!)

Anyway, Nicaragua is the latest U.S.-backed attempted coup. So, this seems like a good time to present: How to Create a U.S.-Backed Government Coup!

You can play along at home—especially if your home is in Nicaragua or Venezuela.

Don’t tell me you don’t know what a “fifth column” is. How could you be so naive! (This is the part where I mock you for lacking knowledge that I myself learned only last week.)

As smart person Peter Koenig explains, “A Fifth Column is a group of people who undermine the government of a country in support of the enemy. They can be both covert and open.”

There are various ways to create fifth columns. We here in the U.S. like to create ours with a good, wholesome front: nonprofit organizations. Our two favorites are USAID and the National Endowment for Democracy (NED). What is the NED? Well, as Editor of Consortium News Robert Parry put it,

In 1983, NED essentially took over the CIA’s role of influencing electoral outcomes and destabilizing governments that got in the way of U.S. interests, except that NED carried out those functions in a quasi-overt fashion while the CIA did them covertly. NED also serves as a sort of slush fund for neocons.…

So we use NED and USAID to destabilize countries. Keep in mind, though it may not sound like much, there are consequences to destabilizing countries. By doing it, we indirectly kill a lot of people, or at least ruin their lives, leaving them poor or destitute. But to create a successful coup, it’s important you don’t care about any of that stuff. Leave that for the nerds with their pencils and their statistics. If babies die because they can’t get the medical treatment they need, not your problem. You’ve got other stuff to do—like wipe bird shit off your $1,200 loafers.

This can be done via sanctions, as we are currently doing in Venezuela and Iran. Simultaneously, use the fifth column and the obedient American media hacks (CNN, Fox News, MSNBC) to convince the people of said country that their economic troubles are the fault of only their president.

“It’s the Venezuelan president’s fault you don’t have toilet paper! He’s hoarding all the toilet paper. He’s sitting up there on a throne made of Angel Soft triple ply! His anus is singing ‘Joy to the World’ right now!”

But, what our corporate media really don’t want you to know is the truth. Peter Koenig, who was also an international observer for the Presidential Economic Advisory Commission (showoff), stated,

… It is absolutely clear who is behind the food and medicine boycotts (empty supermarket shelves), and the induced internal violence [in Venezuela]. It is a carbon copy of what the CIA under Kissinger’s command did in Chile in 1973 which led to the murder of the legitimate and democratically elected President Allende and to the Pinochet military coup. …

So you create economic troubles, which make people hungry and angry, and that leads to …

STEP THREE: Wait for internal protests and/or create them.

Basically, there were legitimate protests in Nicaragua because what country doesn’t have protests now and again? But then the U.S. and our front groups threw kerosene on the situation. The NED-funded publication Global Americans actually bragged about the kerosene it threw. In an article titled “Laying the groundwork for insurrection: A closer look at the U.S. role in Nicaragua’s social unrest,” it said, “… the NED has funded 54 projects in Nicaragua between 2014 and 2017.”

So various U.S.-backed groups redirected the protests against the Daniel Ortega government. Some protesting students were even flown to the United States for further instruction from Freedom House, which has deep ties to the CIA. Once here, the students posed for photos with none other than U.S. Sen. Marco Rubio, R-Fla.

If there’s one thing I trust, it’s people who are proud to meet Marco Rubio. I mean, even Marco Rubio’s kids tell people that Joe Biden is their father.

So as with Syria, after genuine protests began in Nicaragua, the U.S. used the fifth column to exacerbate the tension and channel the protests toward a violent showdown.

STEP FOUR: Get violent while accusing the government of getting violent.

We’ve seen this tactic in Nicaragua and Venezuela. There was violence on both sides of the protests, but far more on the U.S.-backed sides, sometimes with help from the CIA or alumni from our military training facilities like The School of the Americas. But because of media propaganda, many believe there is primarily violence on the government side, when in fact it’s the opposite.

STEP FIVE: If steps 1 through 4 don’t work, kidnap or assassinate.

The time may come when you’ve exhausted other options and simply must whack a dude. Don’t feel bad. It happens to the best of us.

Or, if you’re feeling generous, you can put said target on a U.S. military plane and fly him to Africa against his will—as happened in 2004 to the president of Haiti, Jean-Bertrand Aristide. He was kidnapped by our military and taken on one of the most awkward 14-hour flights one can imagine.

There is an endless number of examples. Want some more? How about the 1973 CIA-backed overthrow and killing of socialist President Salvador Allende in Chile? But have no fear, he was replaced by murderous dictator Augusto Pinochet, whom the U.S. liked A LOT better. (We shared the same taste in death squads.)

Ecuadorean President Jaime Roldos Aguilera died in an airplane “accident” in 1981 after going forward with a plan to reorganize Ecuador’s fossil fuel industry, which U.S. interests were very much against. His airplane fell out of the sky after coming down with a bad case of the CIA.

Even NBC has recounted the bizarre CIA plots to assassinate Fidel Castro in Cuba, some of them involving exploding cigars. To be honest, I can’t look down on that because it is the funniest way to kill someone. So as long as it gets a laugh, I approve.

And a few weeks ago, we saw an attempt to kill President Nicolás Maduro in Venezuela with a small explosive drone. While there’s no indication the U.S. military was directly involved, that’s not really how it rolls. The military prefers to fund front groups so it looks like the U.S. had nothing to do with it. And keep in mind there WAS a U.S.-backed coup against Hugo Chavez, Maduro’s predecessor, in 2002. So taking out the Chavez-Maduro government has been a long-term goal of the U.S. deep state.

There you have it—thanks for playing How to Create a U.S.-Backed Government Coup!