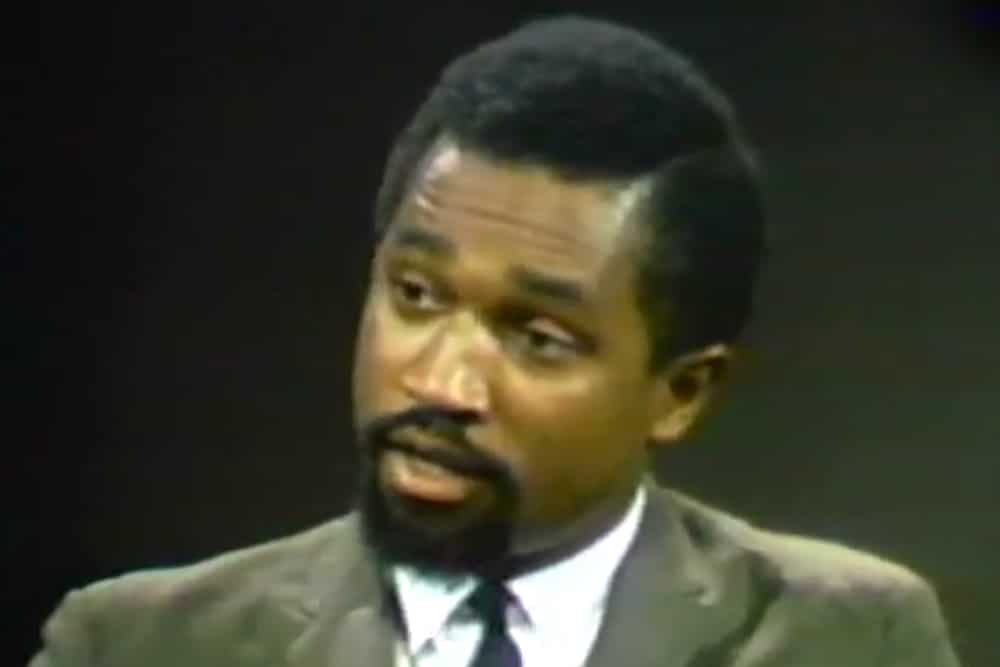 A dear friend of mine passed away in 2016. He was a lifelong revolutionary activist and quite possibly the most interesting man in the world (sorry, Dos Equis guy). His name was Kwame Somburu, formerly Paul Boutelle.

I came into Kwame’s life through chance when, after a journey that resembled more than a dozen lifetimes, his eclectic path led him to Albany, NY.  It was 2012, and Kwame was well into his 70s when he entered the capital district activist scene. He was a bit of an enigma, presenting a uniquely powerful blend of principled conviction and carefree humor. Unlike many activists, he was immediately lovable; not bitter, not rancorous, not pushy, and not self-inflated. He was grizzled, yes, but in an old-school way, where you could almost see the wisdom oozing from his pores. He had every reason in the world to possess a runaway ego, but nonetheless carried a calm humility that could not be mistaken. In an oft-aimless world, he was the personification of guidance.

Kwame undoubtedly carried the emotional scars of growing up Black in America, as well as the spiritual exhaustion of being on the front lines of struggle for five decades. Yet he was bulletproof, unfazed by the cruel confines of American society, which he had long broken from in his push to lead a fierce and principled revolution against the roots of this society: capitalism, imperialism, colonialism, white supremacy, and patriarchy. 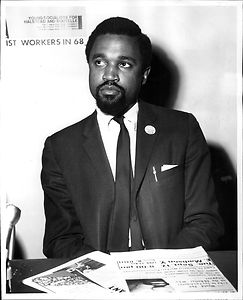 Kwame Somburu in 1968 as the vice presidential candidate for the Socialist Workers Party.

Kwame’s list of achievements and experiences would require an entire book to do them justice. He had run for public office nine times throughout the 60s and 70s, once as the Vice-Presidential candidate for the Socialist Workers Party. He spent these decades speaking on the street corners of Oakland and Harlem, giving lectures at Oxford and the London School of Economics, and appearing on numerous TV and radio shows, most notably partaking in a contentious debate with William F. Buckley in 1968 on Buckley’s popular show, Firing Line.

Kwame was active in the Fair Play for Cuba Committee (early 60s), participated in the 1963 March on Washington, co-founded Afro-Americans Against the War in Vietnam (1965), spoke at numerous Black Power Conferences through the 60s, and assisted in organizing 400,000 people from the Native Sioux, Puerto Rican, and African-American communities to rally at the United Nations in 1967.

In 1970, Kwame served as the chairman of the Committee of Black Americans for Truth About the Middle East, an organization that spoke out against the U.S.-supported crimes of the Israeli government. Representing an early voice in support of the Palestinian struggle, Kwame toured Lebanon, Jordan, and Syria as a guest of the General Union of Palestine Students. In 1993, Kwame engaged in a speaking tour throughout Europe to discuss Malcolm X, the film about his life, and in defense of Black Nationalism and Socialism.

Despite all of this, Kwame’s most endearing quality was his ability to inject his principles into humor. After living a few years in upstate New York, he regularly joked that there was “only one kind of white supremacy that cannot be denied…snow.” He always made a point to immediately correct someone’s usage of “history” by responding with, “it’s herstory…because you can’t have man without womb-man.” He talked about his nationally televised appearance-turned-debate with William F. Buckley like a pugilist would talk about an old street fight in their prime:

Buckley had no idea how to respond to historically-informed analysis…he was a mental midget.

Kwame was proud of his performance on Buckley’s show [watch the entire episode here—Eds.], and rightfully so. He would encourage folks to watch it whenever he had the chance. He did this not in a boastful or braggadocios manner, but in a way that was meant to empower those of us in the trenches–as if to say, “here I was, a Black man in the belly of the beast and from modest beginnings, largely self-taught, staring down an Ivy League-educated white man and conservative icon who came from one of the most privileged paths imaginable.” On national television. And not only staring down, but bodying on all levels–intellectually, ideologically, logically, historically, and morally, ala Malcolm X at the Oxford debates.

He masterfully defended the Cuban revolution to Buckley, justifying the harsh treatment of Cuban reactionaries by explaining that if a people’s revolution occurred in the US, “I’m sure there will be a lot of Mississippi sheriffs who would be put on trial.”  To counter Buckley’s misrepresentation of socialism, Kwame accurately described his party as “a party which represents social forces that desire change” due to a deadly and exploitative capitalist system and its embryonic Native genocide and “500-year slave trade” that resulted in the deaths of “100 million black people.” When pressured further about his beliefs, Kwame brilliantly flipped the script, telling Buckley, “What are you representing? You’re representing George Washington, you’re representing Custer, you’re representing an imperialist, oppressive, racist system. So, don’t attack socialism on the assumption that the system you represent–which is full of lies, hypocrisy, and murder–has been so perfect. The only thing capitalism has done is to provide opportunists like yourself with the opportunity to be parasites on the backs of oppressed people.” When Buckley tried to shut Kwame down by claiming, “American Negroes are free,” and that he would “get more Negro votes” if he ran, Kwame nailed the coffin by snapping,

I’m sure of one thing…if you went down to Mississippi and told Black people they were free, you would be running and it wouldn’t be for office.

During our time together, Kwame described his ideological development in his own words: “In 1960, after a few years of independent study (from a scientific perspective) in many and varied historical/contemporary areas, but mainly African and African American history, the writings of Marx, Engels, Lenin, and Trotsky, and acquired knowledge from life experiences, I declared myself to be a Black Nationalist–class definition–and a Scientific Socialist.” Within a multitude of wisdom and guidance, it dawned on me that this unassuming portion was perhaps his most important–scientific socialism.

Or maybe it wasn’t so unassuming. When describing his political orientation, Kwame was intent on always including “scientific” before socialist. Whenever bluntly asked if he was a socialist, Kwame would quickly respond “scientific socialist,” always with an emphasis on the scientific part. If engaged in a political or theoretical discussion, he would sometimes refer to socialism, only to quickly correct himself with a “that is, scientific socialism.” He wanted folks to understand that socialism goes deeper than utopian idealism; that it is rooted in a scientific, materialist analysis. It’s safe to say the commitment to this message was obsessive. So much so that it may have been easy for many to view it as a trivial quirk.

And while I always appreciated his relentless effort of being literal, I too underestimated the importance of the emphasis. That was until 2015, when Bernie Sanders emerged as a formidable candidate for president.

To those of us in radical circles, Bernie was always viewed as an interesting member of the entrenched political class–a man who spent his entire career as a U.S. Senator flopping back and forth between maintaining the imperialist state and serving as a thorn in the side of wealthy capitalists. Bernie was known for his Senate hearings, where he would routinely grill a CEO or financier, denounce economic inequality and poverty, and put on a valiant show in the name of morality. In a bit of a stretch and with some exaggeration, he could be given some credit for helping to spark the Occupy movement. However, not a whole lot beyond that. Despite his entertaining interludes, capitalism and its war machine always continued unabated, running roughshod over much of the world and many Americans.

Despite his predictable impotence while serving as a cog in a rotten machine, Bernie’s emergence onto the national stage was beneficial in one way: It paved the way for the fateful return of the term “socialism.” As a result, socialism has entered public discourse once again, millennials in droves are now referring to themselves as socialists, the Democratic Socialists of America (DSA) have experienced historic swelling in their ranks, from 5,000 members in 2016 to 40,000 in 2018, and it led The Guardian  to ask the question, “Why are there suddenly millions of socialists in America?” even several months before the 2016 election. This development also indirectly helped authentic socialist candidates, like the Socialist Party USA’s (SP-USA) Mimi Soltysik, the Party for Socialism and Liberation’s (PSL) Gloria La Riva, and the Workers World Party’s (WWP) Monica Moorehead to gain more momentum in their abbreviated tours across the country.

However, along with this sudden resurgence has been a lot of backlash and confusion. The backlash has come in the form of sensationalist tactics that are undoubtedly the product of an intentionally dumbed-down society. Red-baiting is being deployed from both sides of mainstream politics–by conservatives through their typical anti-intellectual and ahistorical knee-jerk reactions, and by liberals through a bizarre and equally ahistorical conflation of Trump, Russia, and Communism, which has reached the absurd level of associating the hyper-capitalist boss, Trump, with the hammer and sickle, a symbol that stands for industrial and agricultural workers uniting in opposition to capitalist bosses. The latter development has led to the chronic overuse of the term “democratic socialism”–a redundancy born of red-scare and cold-war propaganda–by those who moonlight in liberal spaces.

The confusion has come in the form of hordes of young people embracing a term that they have not researched or read up on. If you ask a few dozen, newly-ordained “socialists” in the United States what socialism is, you may get a dozen different answers. Many will be sure to insist that “socialism is not communism!” out of a residual fear still emanating from corporate media. Many describe socialism as nothing more than New-Deal liberalism, a tame form of capitalism that includes stronger social safety nets – an explanation surely rooted in the Sanders candidacy and Bernie himself. Others may give half-baked answers, vaguely referring to Nordic countries, cooperative business models, and even Guaranteed Basic Incomes in an attempt to separate themselves from the confusion.

In coming full circle, the answer to this backlash and confusion is found in my late friend, Kwame Somburu, or more specifically in his unapologetic, principled, and informed embrace of scientific socialism: The use of scientific methods, rooted in the work of Karl Marx (a materialist conception of history and dialectical materialism), that adequately analyze both the structure and evolutionary functioning of the capitalist system to expose inherent contradictions, exploitative and alienating underpinnings, surplus value, and the laws of accumulation of capital.

In “plain, proletarian English,” scientific socialism is genuine socialism–an accurate breakdown of capitalism and a realization that it must come to an end if we have any hopes of living in a just and sustainable world. It means a constant, deliberate focus on pinpointing and destroying all forms of oppression, or as Kwame succinctly put it, “analysis of capitalism/imperialism, fascism, racism, and colonialism” with the purpose of “worker’s revolution, colonial revolution, self-determination for all peoples, and relevant contribution towards a working-class world revolution.” This does not mean a tightly monitored form of capitalism; it means no more capitalism. It does not mean government control; it means worker control of the means of production. It does not mean guaranteed income for all; it means workers, families, and communities finally enjoying the fruits of our labor. It does not mean “bread lines”; it means reducing massive amounts of waste through community-run production and the de-commodification of basic human needs. It does not mean equality; it means justice.

Although he never waned, Kwame would be rejuvenated by recent developments. But he would also be praising the merits of scientific socialism like never before. In a time of confusion, let’s follow Kwame.