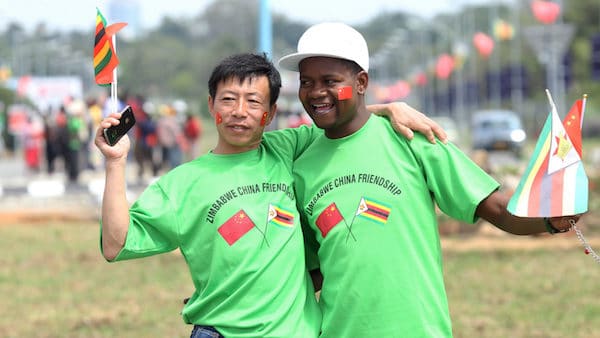 An unidentfied Chinese national and a Zimbabwean man hug while welcoming Chinese President Xi Jinping upon his arrival in Harare, Zimbabwe, Tuesday, Dec. 1. 2015. Jinping is in Zimbabwe for a two day State visit during which he is set to sign some bilateral agreements aimed at strengthening relationships between the two countries. (AP Photo/Tsvangirayi Mukwazhi)

Chinese President Xi Jinping has offered a $60 billion aid package to African countries over the next three years, in response to the continent’s increasing debt distress—with no strings attached.

China’s investment plans include $5 billion in African exports, $10 billion for development, and $15 billion grants and interest-free loans. A $20 billion credit line will also be included, as well as emergency food aid, scholarships and vocational training, and increased agricultural development.

“China will extend $60 billion of financing to Africa in the form of government assistance as well as investment and financing by financial institutions and companies,” China’s president said during the Forum on China-Africa Cooperation (FOCAC), a triennial meeting between Chinese leaders and leaders from across Africa. Leaders of 53 African nations were present during the two-day summit in Beijing.

The $60 billion aid package is the same amount Beijing previously pledged at the last FOCAC summit in South Africa in 2015. While aid pledged during FOCAC summits in the past has a history of increasing from year to year, such pledges have remained consistent more recently.

Jeremy Stevens, international economist for the Standard Bank Group, said it would not be “politically appropriate” to offer larger loans at a time that the continent is already overloaded with debt. Stevens contended that the lack of increase is not a step back in relations, rather it is “a maturation and a natural evolution of the relationship.”

Since 2000, Africa has borrowed around $130 billion from China. The International Monetary Fund warned this year that, thanks to 40 percent of Africa’s low-income countries being at risk or in debt distress, the continent is facing a debt crisis—though researchers at the China-Africa Research Initiative at Johns Hopkins University have concluded that Chinese loans are not a major contributor to debt distress in most African nations. 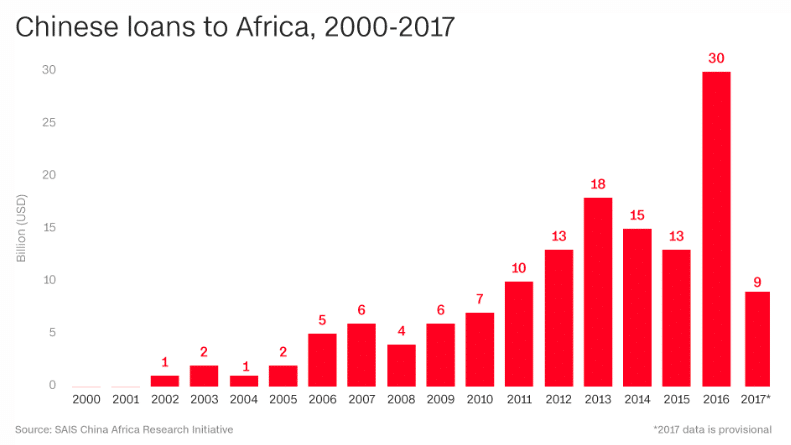 Beijing’s planned investments in developing nations are coming under increased scrutiny. In response to accusations of encouraging “debt trap” diplomacy in Africa, Xi said the aid package is not “a scheme to form an exclusive club or bloc against others. Rather it is about greater openness, sharing and mutual benefit.” He added:

China does not interfere in Africa’s internal affairs and does not impose its own will on Africa. What we value is the sharing of development experience and the support we can offer to Africa’s national rejuvenation and prosperity.

Xu Jinghu, the special envoy for Africa, said in response to the accusations:

It’s senseless and baseless to shift the blame on to China for debt problems.

Jinghu added that China would conduct studies in order to avoid causing additional debt problems on the African continent, specifying:

These projects will take into account their development prospects so as to help African countries achieve sustainable development and avoid debt or financial problems.