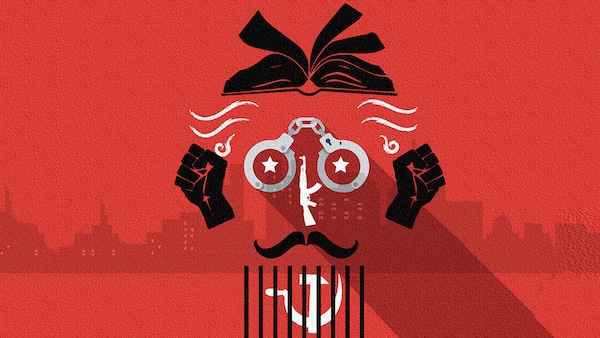 The Bharatiya Janata Party-led government and the Hindutvavadi “nationalist” movement’s demonic drive for cultural orthodoxy seems to know no bounds. What is alarming is the former’s support for and complicity in the acts of the latter, as also the Indian state’s control of its “necessary” enemies through the use of state terror, with the category “urban Naxals” singled out in the latest of such drives (in June and August 2018) that otherwise routinely target Muslims, militant oppressed nationalities, and “Maoists.” In the government’s categorisation, the “urban Naxals,” at least so far, are lawyers, rights activists, poets, writers, journalists, and professors, deemed to be “active members” of the Communist Party of India (CPI) (Maoist).

The five people arrested in August are charged under, among other criminal laws, sections of the Unlawful Activities (Prevention) Act. The residential/office premises of these “urban Naxals” and some others, whom the government also wanted to harass and intimidate, were raided. The intention to malign and discredit was particularly evident when sections of India’s “embedded” media brought the charges against some of them in blatant acts of intimidation on prime-time TV. Some of the “guilty” were publicly castigated as “desh drohis” (betrayers of the nation), “invisible enemies of the nation,” and “serious threats to Indian democracy” for “aiding the CPI (Maoist).”

Among the presumed “invisible enemies of the nation” and “serious threats to Indian democracy” is the Economic & Political Weekly’s (EPW) distinguished journalist Gautam Navlakha. Navlakha joined the EPW in the early 1980s, working alongside Rajani Desai, M S Prabhakara, and Krishna Raj, among the best of Indian journalists I have known. Later in the 1980s, when he shifted residence to Delhi, he continued working for the EPW, and was designated as editorial consultant. He continued in that capacity until January 2011, when he requested the then editor C Rammanohar Reddy to be relieved of his formal association because he wanted to devote more time as a democratic rights activist with the Peoples Union for Democratic Rights. But, he has continued to write for the EPW.

Something quite distinctive began to take shape in Navlakha’s writings from the early 1990s onwards, when he became closely associated with the Jammu Kashmir Coalition of Civil Society, participating in its fact-finding teams, its campaigns, and in the writing of its reports. Deeply committed to the truth, much of it buried in the ground in Kashmir in unmarked graves, Navlakha’s writings in the EPW and other magazines removed the fig leaves that the Indian state had used to cover up its terrible record on the human rights front in Kashmir: the enforced disappearances and subsequent killings in fake encounters, the legal immunity to army, paramilitary, and police officers for their actions, and so on.

The lie of Indian democracy, Navlakha has been showing his readers, is evident in Kashmir. You have to be really brave to be a journalist and rights activist like Navlakha, especially when you are aware of the establishment’s art of propaganda, with big “embedded” media on its side. The victims of the violence are constantly being blamed for the violence, and angry readers will not even be willing to listen to you. Even sections of India’s parliamentary left have been dismissive of Navlakha’s writings on Kashmir, calling him “misguided.” But, he has stood his ground with facts and reason, and has continued to indict the Indian state for the hell of internal colonialism in Indian-administered Kashmir.

To be a Marxist–socialist, one must protest against all kinds of oppressions, whether ethnic, national, caste, class, racial, or gender. This is at the core of Marxist–socialist ethics. Marxism is a philosophy of the downtrodden, the proletariat, and the semi-proletariat, in the latter, especially the poor peasantry. Marxism is not a philosophy of power; it is a philosophy of equality, which Navlakha has imbibed and practised. His journalistic and rights investigations thus drew him to the heartland of Maoist rebellion in southern Chhattisgarh where the Indian state has unleashed counter-insurgency warfare, called Operation Green Hunt, since September 2009.

Here, Navlakha has almost been what the American journalist Edgar Snow was in the 1930s in China (remember his Red Star over China, published in 1938), when he entered the Red territory, reporting the facts as he saw them, about the Chinese People’s Liberation Army, the Communist Party of China’s leaders and its programme and policies. Navlakha’s 2012 book, Days and Nights in the Heartland of Rebellion, reports the facts as he saw them at a Maoist guerrilla base in southern Chhattisgarh. Based on his understanding of the civil war, Navlakha has been advocating that both the Indian state and the CPI (Maoist) adopt Common Article 3 of the Geneva Conventions of 1949 and Protocol II of 1977 relating to non-international armed conflict.

What then of the “urban Naxal”? Keeping in mind the practice of Navlakha, I would define a “Naxal” as follows. A Naxal is one who cannot remain unmoved upon finding that most of the Indian people are still inadequately fed, miserably clothed, wretchedly housed, poorly educated, and without access to decent medical care, and feels that this state of being stems from India’s deeply oppressive and exploitative social order, crying out for revolutionary change. My perception is that, in this sense of the term, a great many Indians might indeed be Naxals, whether urban or rural, like Navlakha and me, and you do not have to necessarily be a member or a supporter of the CPI (Maoist) to be one.