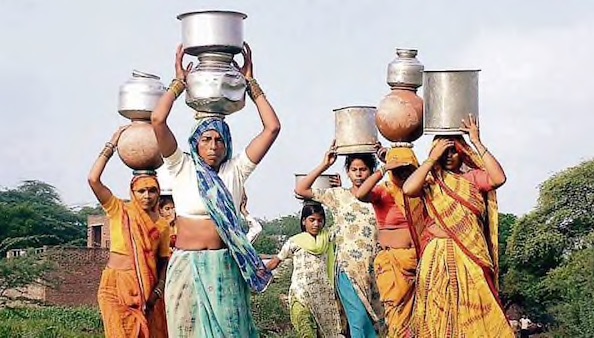 An NSSO survey shows that in rural areas, the average trip to the water source takes 20 minutes and there is a 15­minute waiting time and it takes several trips to meet the water needs.(PTI File Photo)

One of the difficulties with discussions on employment in India is the tendency to conflate employment and work. But employment is only that part of work that is remunerated, and in India a vast amount of work is actually unpaid and often not even socially recognised. Once we recognise that, a lot of what appears to be inexplicable about Indian employment trends becomes easier to understand.

This is especially true of women’s work. There has been much discussion on the evidence from recent National Sample Survey Office (NSSO) large sample surveys on employment, of the significant decline in women’s workforce participation rates.

The work participation rate of rural women aged 15+ years declined from 35 per cent in 1999-2000 to 24 per cent in 2011-12, while the rate for urban women did not change from the really low rate of 16.6 per cent. Various explanations have been offered for this, from more young women being engaged in education (which is still not enough to explain the decline) to rising real wages that have allowed women in poor households to avoid or reduce involvement in very physically arduous and demanding work with relatively low wages. Implicit in this discussion is a notion of a household-level backward bending supply curve, which allows women especially in poorer families not to “work” when their economic conditions allow it. 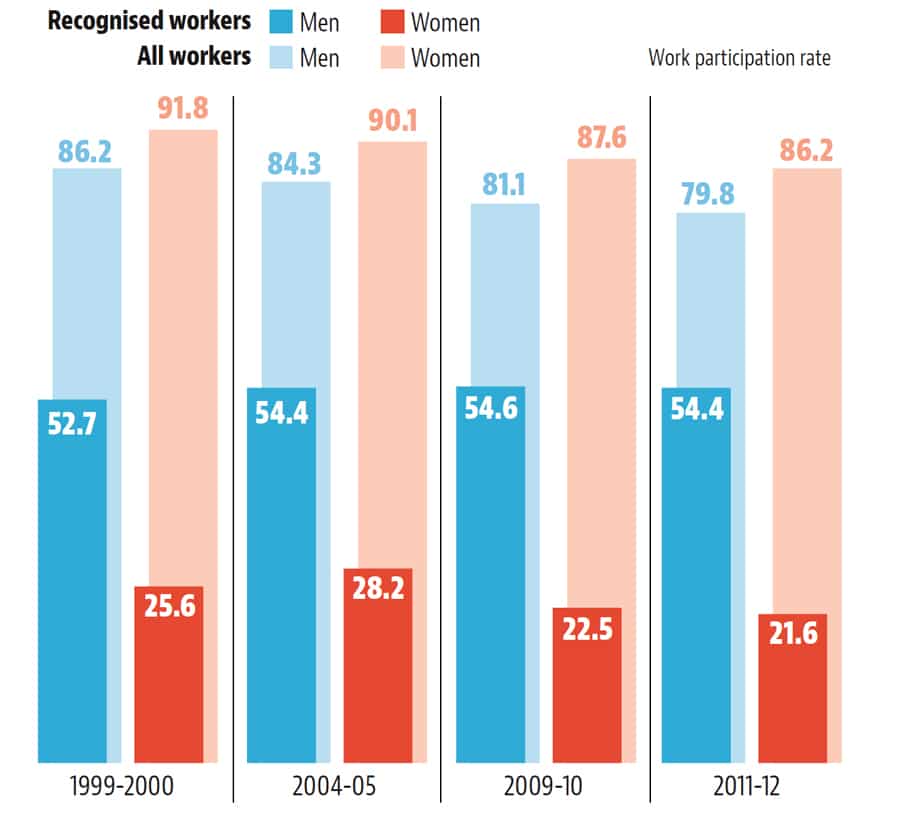 India’s hidden women workers – If one includes unpaid work, women have a greater share of workers than men in India.

But these numbers relate to recognised employment, even if it is informal or self employment. The same survey reports also include some categories that are described as “not in the labour force”. The categories that matter are Code 92 (attended to domestic duties only) and Code 93 (attended to domestic duties and also engaged in free collection of goods like vegetables, roots, firewood, cattle feed, etc., water collection, sewing, tailoring, weaving, etc. for household use—both of which heavily involve women working in unpaid ways. There is also Code 97 (“Others”, including beggars, prostitutes, etc.) which is a strange anomaly because these activities do involve money transactions but are still not classified as work. If we include Codes 92, 93 and 97 in the definition of work, then we get quite different results. Let us call these two categories recognised workers and all workers. The chart indicates how these have moved since 1999-2000. Three striking features emerge. First, instead of a really low work participation rate, more women work in India than men! In 2011-12, the total women’s work participation rate was as high as 86.2 per cent, compared to 79.8 per cent for men. Second, the decline over the previous decade can then be explained entirely by more women in the age group 15-24 years participating in education. Third, and most important: the decline in women’s employment rates really reflects a shift from paid to unpaid work. This is a very different picture from the conventional one that sees most women in India as “not working”.

Why was there such a shift? Disaggregation shows that the increase was mainly in Code 93 (domestic and allied work), with nearly 8 percentage points increase in rural women and 2 percentage points increase in urban women falling into this category in 2011-12 compared to 1993-94. This was most marked for poor women: in the bottom 40 per cent of households according to consumption expenditure, the increase was by 12 percentage points in rural areas and around 5 percentage points in urban areas. A significant share of such unpaid women workers (40 per cent in rural areas and 22 per cent in urban areas in 2011-12) were dominantly involved in fetching water for household consumption, an activity that takes more time than before. More than half of the poorest women had to do this, as well as to collect biofuels for cooking as they did not have access to or could not afford other fuel. (Data from Shiney Chakraborty, “Gender Wage Discrimination in the Indian Labour Market 1993-94 to 2011-12” PhD thesis submitted to Jawaharlal Nehru University in 2018).

This suggests that absence of basic amenities was an important factor driving the increase in unpaid work. Another NSSO survey (69th round in 2012) found that in rural areas, the average trip to the water source took 20 minutes, with an additional waiting time of 15 minutes at the water source, and that several trips were required in order to meet the water needs for household consumption.

In urban areas the time for travel to the source was 15 minutes and the time spent waiting per trip was 16 minutes. Similarly, significant time was spent by women on collecting fuelwood and fodder for animals. The Ujjwala scheme providing a free first cooking gas cylinder to BPL women is superficially successful, but has nevertheless failed to overcome this problem, because most households have found that they cannot afford to buy the subsequent cylinders.

What is more, nearly two-thirds of these unpaid women workers reported that they had to perform these necessary tasks because there was no one else in the household to do them. Nevertheless, a significant majority said they would be willing to accept paid work, pointing to the overall inadequacy of productive employment generation in the economy.

In addition to these extended domestic tasks, there are the various activities associated with the “care economy”: care of the young, the old, the sick and the differently abled; cooking, cleaning and generally looking after healthy adults–all of which are dominantly seen as the responsibility of women in the household. When these services are outsourced and provided commercially, the providers are seen as workers in India; but when they are performed by women within households, such women are classified as “not in the labour force”.

This lack of recognition of a significant part of the work dominantly provided by women has several important economic and social implications. The unpaid-paid continuum of women’s work serves to devalue both women and the work they do. Thus, when women do enter labour markets, their wages tend to be lower than those of men–not only because they are willing to work for lower wages but because so much of their work is available for free. India has one of the largest gender gaps in wages to be found anywhere in the world, with women’s wages on average only around two-thirds that of men’s wages.

Related to this, the occupations in which women dominate tend to be lower paid–and the wage penalty extends even to men doing similar work, such as in the low paid care sector. This is certainly true of private employers. But in India, even the government has used these gender-segmented labour markets to provide public services on the cheap, by employing anganwadi workers and helpers and ASHAs as “volunteers” who are paid only a fraction of the official minimum wages. Similarly, women are disproportionately employed by state governments as parateachers and ANMs (auxiliary nurses and midwives) and paid far less than regular employees. Third, all this unpaid work provides a huge subsidy to the recognised economy and to the “formal sector”, which rely both directly and indirectly on the goods and services produced by these unsung and unrewarded workers. Because this contribution is not recognised, it enables self-satisfied perceptions of rising aggregate labour productivity in the economy, which may be quite misplaced. And it means that public policy can continue to ignore the need to reduce and redistribute such unpaid labour, and can persist in the mistaken belief that GDP growth will simply generate enough “good jobs” for everyone.

This is the fourth in a five-part series on India’s employment challenge. The third part examined why India’s job problem is easier to solve than its battle for wages. The next and final part will look at the role of caste-discrimination in labour markets.