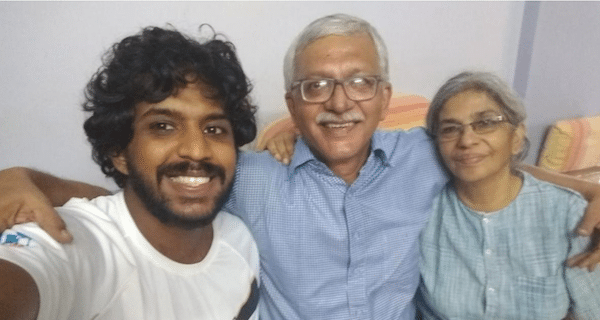 Sagar Abraham-Gonsalves writes about his clawing helplessness as his father, Vernon Gonsalves, was arrested on Tuesday in the Bhima-Koregaon case.

I experienced a familiar sense of helplessness on Tuesday morning.

Around 6 am, our house in Mumbai was raided by more than 10 people from the Pune Police along with constables from our local MIDC Police Station. They had come to search our house and arrest my father. Our mobiles were taken away, landline phone kept off the hook; our personal CPU was opened, books were taken down one by one, CDs were examined, pen drives were scanned for suspicious material. Any book that had Mao, Naxal or Marx in its name was examined and many of them were taken away as evidence. These are books you could very easily have found in a library or online. My personal copy of the Bolshevik Revolution Volume I by E.H. Carr was also packed away as evidence. They were in our house for almost seven hours till around 1.45 pm with some police constables standing at our building gate as well. We were not allowed to go out of the house in all this time. [Details of the case can be read here.]

The helplessness deepened when I saw the casual conversations my parents were having with the police constables. About what they had studied and where they lived. At one point, my mother even made tea for the entire police team and said to me, “They are still our guests.” Tea was had, and conversations were shared but that feeling of helplessness kept clawing at me from the inside. There was nothing my parents or me could do against the might of the all-powerful state and its machinery. So, we coped with it through small talk and smiles. We cooperated and let them do their jobs.

The feeling was familiar because this had happened more than ten years ago in August 2007, when my father was arrested on numerous false charges, brought home at 12 in the night, and our house was raided from midnight to way past 6 am. I was 12 back then and was witnessing the scene more from the eyes of my mother who could do nothing, even though she was a lawyer. At that time, she was told to co-operate, or she could get arrested as well. Back then also there was small talk to cope with the helplessness. The police officers were very impressed by how much I studied and complained about their own children who had no such inclinations.

In August 2007 too, we cooperated and let the state do its job. After spending five and a half years in jail, my father was acquitted in all cases. Five-and-a-half years of a person’s life was spent languishing in prison for crimes he had never committed. What a wonderful job the state had done.

Fast forward to August 2018 (August clearly is not a good month for us), the feeling has returned. Back then it was the midnight knock, now it was the morning bell. And believe me, it is not a good feeling. To be persecuted by the very state whose duty it is to protect and safeguard your rights. To watch while someone whom you love and admire, more importantly someone whom you know has done no wrong, be taken away to jail and all you can do is give that person a tight hug and tell them to be strong. Even to that my father’s response was, “Don’t worry! At least I’ll be able to keep the others company inside!” Along with helplessness, I learnt a lot about hospitality and optimism on Tuesday.

Among the many things that I admire greatly about my father is his commitment to his beliefs and ideals. To stand up for what his right and help those whose rights are denied. He has always done that and will continue to do so. This did not deter him the last time and will not do it now as well. He has an unbreakable spirit and will always stay true to what he believes in.

What we can do as citizens of this country is to protest against this crushing of dissent by the state and its machinery. The systemic oppression of people who raise questions and have an opinion which opposes from the existing narrative. The undemocratic way they are treated and the labels which are being given to them.

Defend the right to dissent. It is a fundamental right of all the citizens in a democratic state.

This is a lightly edited version of a post on Sagar Abraham-Gonsalves’s Facebook page. In 2007, Vernon Gonsalves had been convicted under the Arms Act, the Explosives Act and Unlawful Activities (Prevention) Act and sentenced to five years in prison.

Support Scroll+ by subscribing here. We welcome your comments at letters@scroll.in.