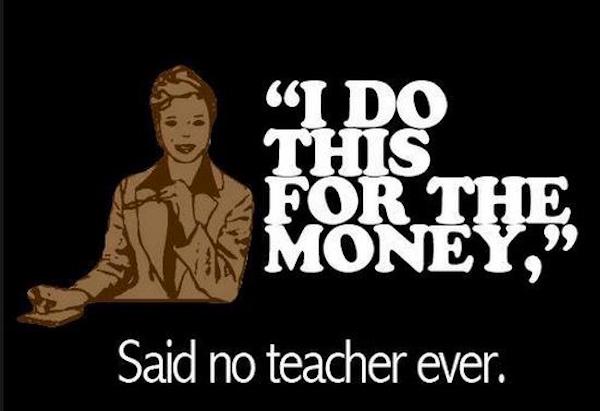 Strikes continue to be an effective way for teachers to improve their living and working (and by extension student learning) conditions. And, polls show that a strong majority of parents continue to support them.

The education pollster PDK recently asked adults what they thought about teacher salaries and whether they would support teachers if they struck to improve their conditions. According to PDK,

73% of Americans surveyed in the 2018 PDK poll say they would support public school teachers in their community if they went on strike for higher pay. Even among public school parents—those who would be most directly affected by a strike—78% say they’d support a teacher walkout. 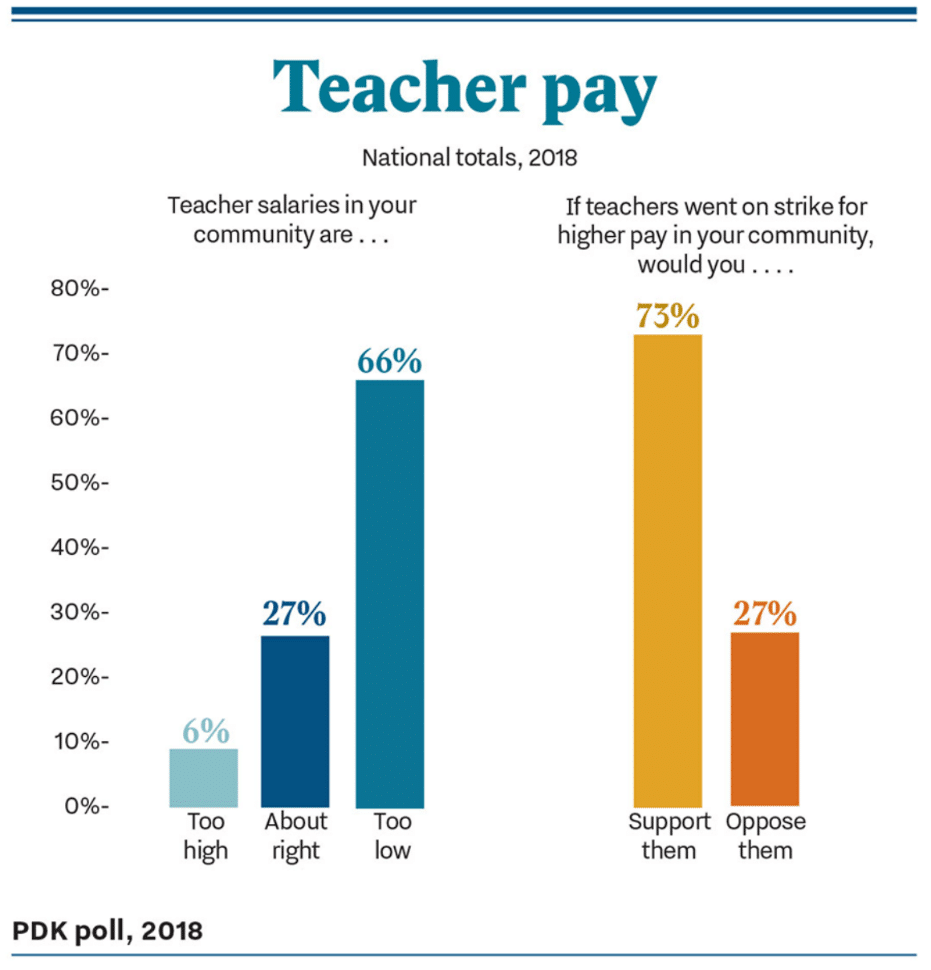 This strong public support was certainly visible during the spring public teacher strikes in West Virginia, Oklahoma, and Arizona.  And it continues this fall. For example, teacher strikes delayed the start of the new school year for thousands of students in Washington state. As Don McIntosh reports in the Northwest Labor Press:

As many as 5,000 teachers went out on strike the week before Labor Day at seven Southwest Washington school districts—districts where school superintendents tried to hold on to funds the Legislature had granted for long-overdue teacher raises. In each case, strikes were authorized by overwhelming majorities—from 93 percent to as high as 98.4 percent. The strikes resulted in the complete closure of whole school districts, postponing the school year’s start for over 60,000 students.

All day long, passing motorists honked their support, and parents, students and members of the community dropped by bringing water and snacks. Some parents handed out strips of paper with a message: We love you and support you! Thank you for taking the time to show us what it means to stand up for yourself even when it is difficult.

Kids and parents and dogs, everybody’s walking the line with us, [Evergreen Education Association president] Beville said. Among all the things that we expected when we went on strike, the most unexpected was the overwhelming support we’re getting from the community. Even on Facebook, when people post negative messages, parents are jumping on them like piranhas.

Washington teachers ended their strikes with sizeable wage increases in five districts, but remain out in two others. School officials in Tumwater in Thurston County and Longview in Cowlitz County filed injunctions in an attempt to force teachers back to work. County judges in both districts declared the strikes illegal, but significantly refused to impose any penalties; the strikes continue.

Teacher pay is too low

While right-wing politicians like to portray public school teachers as a “labor aristocracy,” profiting at the expense of ordinary workers, the fact is that teachers have suffered real wage declines. A case in point: average teacher pay in Washington state fell 8 percent in real (inflation-adjusted) dollars over the last 16 years according to figures from the U.S. Education Department.

American teachers are getting paid less–even though they are better qualified than ever, new research has found.

Teacher salaries are down by nearly 5% compared with before the Great Recession–and it’s not because teachers are younger or less educated, according to the Brown Center on Education Policy at the Brookings Institution.

In fact, the opposite is true.

And, as the following figure shows, not only has teacher pay fallen over the last seven years, the gap in earnings relative to other college educated workers has significantly grown. 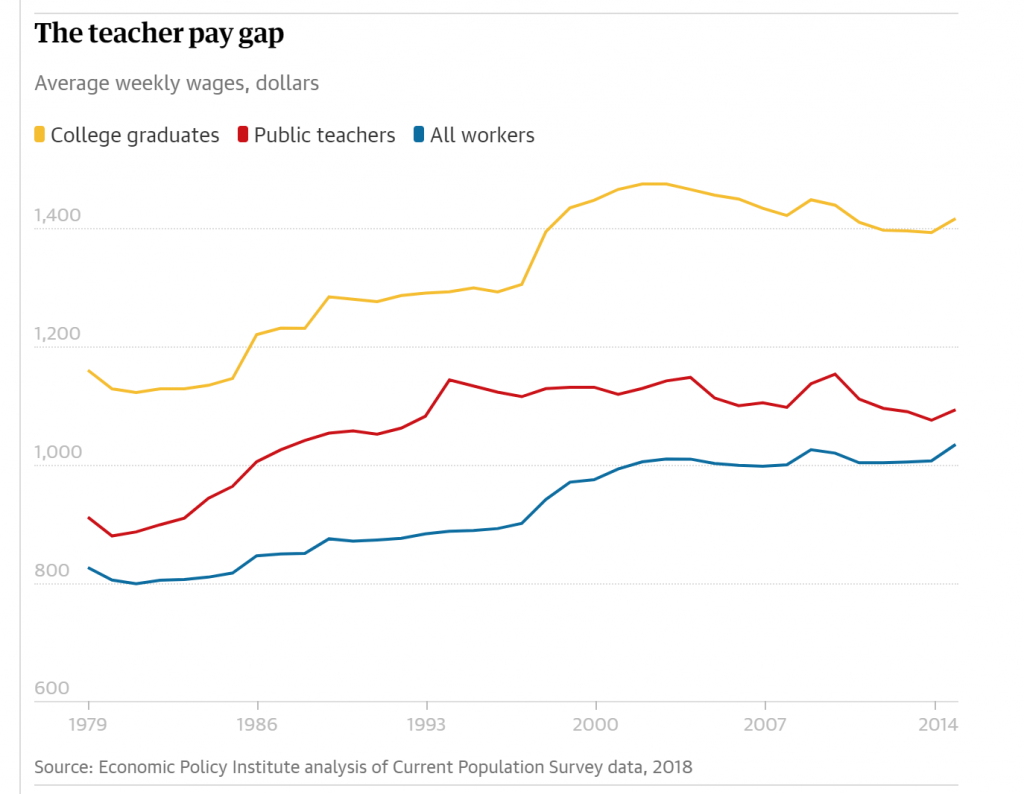 In fact, an Economic Policy Institute study determined, as shown below, that there is no state in which public school teachers are paid more than college graduates. 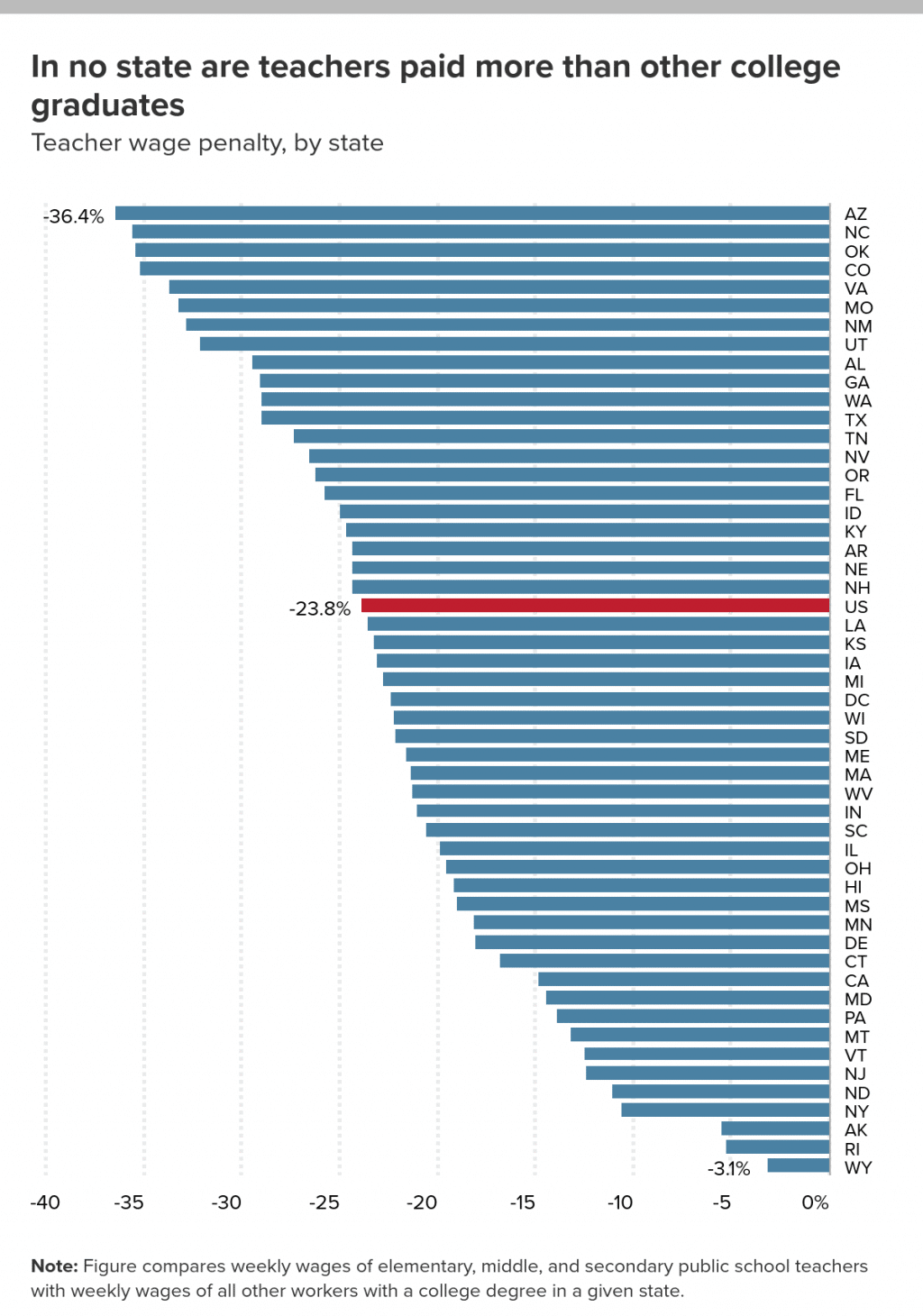 The teacher wage penalty has dramatically grown, even when wages are adjusted for “education, experience, and other factors known to affect earnings.” More specifically the Economic Policy Institute study found that the regression-adjusted wage gap for all public sector teachers grew from 1.8 percent in 1994, to 4.3 percent in 1996, and reached a record 18.7 percent in 2017. 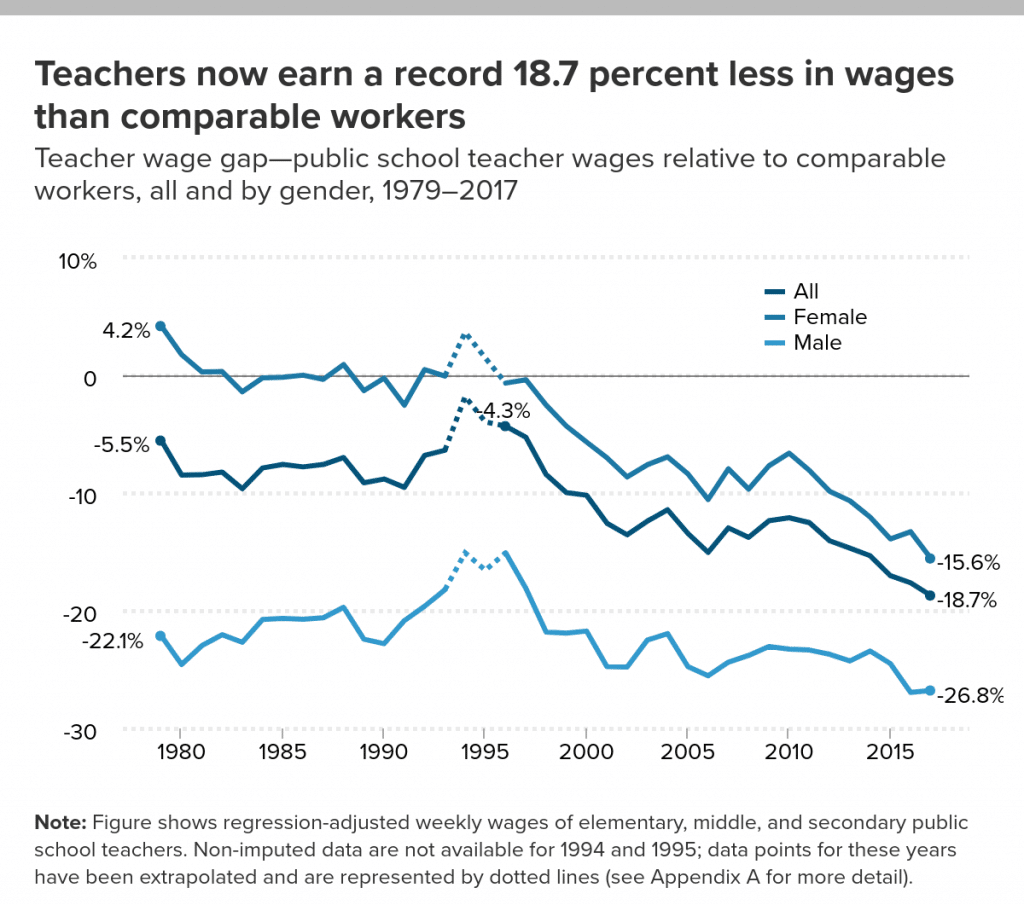 Teacher strikes have been fueled by a number of factors in addition to the wage declines highlighted above, including new testing mandates which crowd out instruction and planning time, and cuts in education budgets which have left teachers with outdated materials and overcrowded classrooms. The recent Janus decision and the efforts of the rightwing State Policy Network to weaken public sector unions makes clear that the teacher movement cannot stand still if it hopes to maintain if not actually build on its recent gains. Public school teachers will have to strengthen their unions and deepen their community ties, and in concert with other public sector workers, build a campaign that makes clear the importance of a well-funded and accountable public sector and the need for new progressive tax measures to raise the required funds.

Obviously, this is no simple task. It is not just a rightwing fringe that opposes public sector unions and raising taxes to ensure a healthy public sector that meets community needs.  For example, as the Intercept reports:

In short, we are engaged in a real class struggle and that understanding has to be built into our organizing from the very beginning.