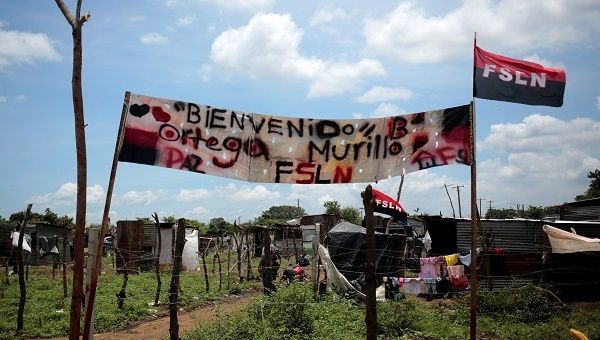 A welcome banner at the entrance of the ‘Ortega Murillo’ neighborhood in Managua, Nicaragua, September 12, 2018. | Photo: Reuters

It’s imperative that President Ortega and Nicaragua be defended from covert imperialist aggression by the United States under its brand of fake ‘democracy,’ writes Lauren Smith.

The United States’ economic and geopolitical stranglehold on Latin America is threatened and they are running scared to put Nicaragua on the Security Council’s agenda, pass the repressive NICA Act and covertly fund mass disinformation campaigns and demonstrations, replete with mortar-wielding mercenaries, against the legitimate government of sovereign Nicaragua–a peaceful country the approximate size of New York State.

Washington’s bureaucrats not only fear favorable reports being released by the International Monetary Fund (IMF) and World Bank on the successful economic and social policies instituted by President Ortega because they undermine their disinformation campaigns to slander and discredit him, but even more importantly, because Nicaragua’s achievements inspire other developing countries. According to the IMF and World Bank reports, Nicaragua has sustained growth in GDP, improved its social indicators, expanded tourism, and provided regional leadership in public safety and sustainable energy. As such, the United States is in a race against time to undermine President Ortega before a tsunami of developing countries wanting success through his model of autonomy topples all its remaining puppet dictatorships.

Historically, the U.S. government justified imperial invasion and occupation by claiming its targeted country was ‘communist.’ Now that the spurious threat of communism has been largely debunked, the latest buzzword used to justify imperial aggression by the United States, when it’s not throwing around the word ‘terrorism,’ is ‘democracy.’ In doing this, the United States effectively lowered its justification bar further, because democracy is a nebulous concept at best. The United States conceals its imperialist aggression under the pretense of being the world’s democracy ‘policeman’ when in fact it is just the opposite. The United States functions as the world’s democracy criminal, overthrowing legitimate governments of sovereign nations to allow its puppet master transnational corporations to unabashedly steal without interference.

Accordingly, the word ‘democracy’ merely provides cover for a pitiful and desperate attack against the rights of sovereign countries, such as Nicaragua and Venezuela, to self-determination and self-defense. Within this context, the word ‘democracy’ is dead and needs to be buried. Justice is autonomy over subservience!

As long as President Ortega remains autonomous and just says no to the dictates of the U.S. government, Nicaragua will never be ‘democratic’ enough for Washington’s liking. The United States will always object to Nicaragua and President Ortega’s handling of national elections, foreign-funded anti-government news media, armed insurgents/mercenaries disguised as protesters, and nefarious non-governmental organizations (NGOs) intent on fomenting discontent. It’s a no-win situation because democracy is always a vague pretext.

The United States’ fear of autonomy spreading among successful developing countries is long standing, and it runs deep and dirty. Invasions and occupations by the United States into sovereign Nicaragua are not new and date back to the early 1900s. Besides the Banana Wars, which were largely to protect the foreign interests of the United Fruit Company throughout Latin America against unions formed by its Indigenous workers and aggrieved and displaced landowners, U.S. military interventions were used to stop nations, other than the United States, from building a transoceanic canal in Nicaragua.

Washington vehemently objects to President Ortega’s ongoing plan to develop a transoceanic canal with Wang Jing, a Chinese national. As such, it promotes the spread of environmental doomsday scenarios throughout the complicit news media, and it funds opposition groups, protests and thugs. The canal engenders a regional shift in power that is unfavorable to the United States’ expressed interests for three primary reasons. First, the transoceanic canal would lessen U.S. influence over Nicaragua, because the canal provides an alternate and independent funding stream to trade and lending–still largely dominated by the United States. Second, the transoceanic canal would allow China to gain strategic geographic access and control over the passage between two oceans. Reportedly, the depth of the canal, at 28 meters, is deep enough for Chinese submarines to quickly and covertly cross between the Pacific and Atlantic Oceans. Third, the transoceanic canal would impinge upon the profitability of the Panama Canal, because it would subject it to competition from a new waterway designed to accommodate today’s larger shipping vessels. As an aside, not only does Panama remain a U.S. outpost, but the United States also enjoys a longstanding trade surplus with Panama. In 2017, the United States received US$6 billion in trade surplus from Panama.

Trade Between Nicaragua and the United States

In stark contrast to its trade surplus with subservient Panama, the United States, since 1995, has suffered an annual trade deficit with Nicaragua. In 2017, the U.S. trade deficit with comparatively tiny Nicaragua was approximately U.S. $1.7 billion.

President Ortega’s success in trade is remarkable, especially given its restrictive trade agreement (DR-CAFTA) with the United States. The DR-CAFTA agreement was reached December 13, 2003, when President Ortega was not in office. While a U.S. $1.7 billion trade deficit might seem relatively small compared to the United States’ overall trade deficit of U.S. $568 billion, it nonetheless demonstrates Nicaragua’s strength in production, farming and in the marketability of its commodities. But, even more importantly, it reveals a growing negative trend against the U.S. plan for world domination.

Trade Between Nicaragua and Iran

Trade between Nicaragua and Iran has really taken off since President Ortega’s election in 2007. Of course, this defies Washington, since Iran is still considered by the United States to be part of the ‘axis of evil.’ Although this hyperbolic designation sounds silly, it isn’t because it carries in part with it the justification necessary for Washington to declare unilateral war.

Additionally, to the chagrin of the United States, Nicaragua remains a stalwart defender of Palestine and of a peaceful solution to the conflict in the Korean Peninsula in the United Nations.

In conclusion, Nicaragua remains a beacon of light and hope for the Non-Aligned Movement. As such, it’s imperative that President Ortega and Nicaragua be defended from covert imperialist aggression by the United States under its brand of fake ‘democracy.’ The time to rise up with Nicaragua in its fight for autonomy is now!

Lauren Smith is author of historical fiction, has a BA in Politics, Economics and Society from SUNY at Old Westbury and an MPA in International Development Administration from New York University. Her novel on Nicaragua’s 1979 revolution is due out in 2019.