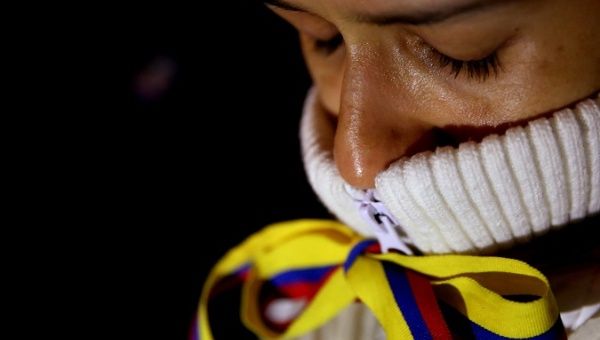 Two years after Colombia signed the final peace agreement with the Revolutionary Armed Forces of Colombia (FARC) the war against Afro-Colombian, Indigenous, and Campesino communities, who are being targeted, threatened and murdered, continues.

For many, especially the victims, the agreement bore the hope of an end to the internal conflict in which at least 7 million people were displaced, 260,000 killed, and 80,000 forcibly disappeared.

Truth, justice, and reparations, the three pillars for guaranteeing peace and avoiding relapse are being undermined by the rampant impunity that benefits paramilitary forces and well-documented state complicity with national and transnational capital that continue to displace, dispossess, and murder social leaders and human rights defenders.

Local rights group Research Institute for Development and Peace, or Indepaz, places the number of victims between November 2016 and May 2018 at 385, while teleSUR’s own monitoring of these cases places the up-to-date number at over 400. Eleven of them were killed by state security forces. The NGO also recorded 80 homicides against former FARC members and their relatives up to May.

It is difficult to know with certainty who is behind these murders due to a lack of investigation by a state that responds to political and economic motivations, according to Camilo Bonilla, coordinator of the research department of the Colombian Commission of Jurists (CCJ).

“There is an important sector of society that belongs to the far-right, that stigmatizes human rights defenders and still sees them as ‘internal enemies.’ They hold privileged spaces in the country’s mainstream media so there is no pressure to clarify these murders,” Bonilla told teleSUR.

Despite lack of clarity on these crimes, Yessika Hoyos, spokesperson for the National Movement of Victims of State Crimes (Movice) and human rights defender, points to paramilitary groups. “Guarantees of non-repetition, that no Colombian will ever have to live the horrors of state crimes and of internal conflict, demands the effective demobilization of paramilitary forces,” she explained, when asked about impunity during an interview with teleSUR.

Human rights groups have identified at least 13 active paramilitary organizations. Three with a national presence, including the Black Eagles that recently vowed to exterminate all members of the progressive political movement Humane Colombia, led by former presidential candidate Gustavo Petro.

A shadow report on human rights for the United Nations Universal Periodic Review showed that the General Attorney’s Office,

Lacks an investigation strategy that recognizes the existence of paramilitaries, the systematic character of the attacks, and that the condition of being human rights defenders constitutes a motive.

“Instead of protecting us, we are being stigmatized by state authorities,” Hoyos said in reference to statements by Defense Minister Guillermo Botero, who on Sept.13 said armed groups are financing social protest, delegitimizing,

the only tool people have to demand their rights.

So far, recently-elected President Ivan Duque of the Democratic Center Party—the party founded by Alvaro Uribe that led the offensive against the peace accords—has not reprimanded his defense minister or recognized the systematic murder of social leaders.

Who Is Targeted in ‘Post-Conflict’ Colombia?

Victims of state and paramilitary violence are overwhelmingly Indigenous, Afro-Colombian and Campesino because of their rootedness to their territories, which sustain not only their material conditions for life but also the preservation of their cultures and traditions. “It is the territory that allows us to be a community,” Colombian activist Francia Marquez, who was displaced from the La Toma community due to mining activities, said in an interview with the Spanish “ctxt” magazine.

A report on local rights groups by Indepaz, the Patriotic March, and the Agrarian Summit revealed that 81.5 percent of the victims belong to Campesino organizations and Communal Action Boards, and that conflict over land and natural resources accounts for 83.9 percent of murder cases.

Different studies estimate that during Colombia’s internal conflict at least 6.6 million hectares were illegally expropriated. Land restitution faces political and logistical challenges. Not only is there a lack of political will but the state’s inability to secure territorial presence and instead guarantee a monopoly on the use of violence means that giving back land to victims exposes them to new dangers.

“Giving back land when the armed conflict is still alive, when several armed actors are still operating, ends in murders,” CCJ’s Bonilla explains.

Access to land and land restitution for victims of forced displacement are central commitments in the peace agreements but Colombians continue to be displaced. “The lands claimed by the victims of forced displacement coincide with lands coveted by multinationals; that is where social leaders are being murdered,” Hoyos told teleSUR. She avoided specific accusations against multinationals operating in Colombia, but evidence abounds.

In 2014, Drummond and Prodeco, a coal mining company that operates in Colombia’s Northern Coast was accused by Dutch NGO Pax of collaborating with right-wing paramilitary groups responsible for murdering union leaders.

After a territory’s population is razed by paramilitary groups, business projects by multinationals or local capital arrive.

The state plays a similar role when it deploys state security forces to guarantee extractive operations despite local opposition. “The state legalizes dispossession. It functions more as an apparatus for class domination than as a guarantor of rights,” Bonilla stresses.

“We need to purge the armed forces of elements associated with paramilitary groups, and to change the military doctrine that sees human rights defenders as internal enemies,” Hoyos urged.

These necessary changes to guarantee justice and non-repetition are highly unlikely during the current far-right government. “We’ve seen the opposite, a recycling of people who worked for the defunct intelligence agency DAS, shut down over human rights violations, who are now working in the General Attorney’s Office or in the National Protection Unit. People linked with paramilitaries are beings tasked with protecting the victims,” Bonilla laments.

Attempts to Dismantle the Peace Accords

Truth and justice, the other two pillars of peace, are also under threat.

“We haven’t had access to truth. When the Truth Commission requested intelligence files, there were many voices that rejected this despite it being within its purview. The government must support the commission; it can’t allow the concealment of information,” Hoyos warned.

Despite these calls and the state’s responsibility in providing justice and truth to the victims, in August, the government of President Duque presented a bill to Congress ordering that “under no circumstances” should investigative bodies such as the Special Jurisdiction for Peace (JEP) or the Truth Commission be allowed access military intelligence regarding national security.

That is only the latest blow to the JEP, which has sustained repeated attacks justified by the narrow victory (0.05 percent margin) of the No vote in the October 2016 referendum to ratify the peace agreements.

In June, Congress approved changes to the JEP by ordering the creation of an exclusive tribunal for police and military agents, which risks delaying judicial processes against state security officials. Despite this, military officials have decided to appear before the JEP in a genuine show of commitment to truth, justice, and reparations for the victims.

“There are very powerful groups terrified of the truth. For these people, the truth is dangerous because it reveals the true criminal character of the state because they were involved in illegal operations and human rights violation,” Bonilla says.

Furthermore, the government recently announced it would use drones to fumigate illicit crops, which violates the peace accords. “In Havana, they agreed on the cooperative substitution of crops as the first alternative, forced manual substitution as a second option, and fumigations as the least desirable. The government can’t change the order of the accords without FARC’s consent,” former Colombian President Ernesto Samper reminded Duque’s government.

FARC has argued this strategy targets the lowest level in drug trafficking while failing to prosecute,

The bosses or the money launderers who, are entrenched in the heart of the financial capital, and who are the real engine of drug trafficking.

Peace in Colombia: Much More than a Demobilized FARC

A real path to territorial peace must emerge from the recognition of what Nieto calls the,

A demobilized FARC cannot dismantle the economic and political structures that generated the conditions for social conflict and gave rise to FARC—mainly land dispossession and the use of state violence as a means of annihilating political opposition.

“Our guerrillas began defending themselves from the terror; from the police and military that persecuted Liberals to kill them,” Pedro Antonio Marin, one of FARC’s founders said in an old TV interview in reference to the period known as La Violencia (1948 – 1958), when Liberals and the ruling Conservatives waged an unofficial war that left over 200,000 deaths.

Since FARC was founded, a model that Colombian professor and rural studies expert Manuel Perez described in 2004 as promoting “an agrarian counter-reform in which (access to resources) are the fundamental lines, expropriating from Campesinos to benefit international economic capital” has only expanded.

Before becoming a conflict of armies, guerrillas, and paramilitaries, Colombia’s internal conflict was a conflict over territory and resources rooted in an export-led economic model dependent on primary goods (i.e. extractive projects and monoculture).

If this model is not replaced there are slim chances for peace.

The 2016 peace accords are aimed not only at demobilizing FARC, but introducing structural improvements to guarantee a dignified life in a deeply unequal country. “It sought to guarantee human rights and access to land, to prevent dispossession, to guarantee political participation without fear of death, to provide access to education, health, and work. That limits the power of armed groups,” Bonilla explains.

That is why rights group Movice insists that even “with all its shortcoming, the international community must demand for the agreements be fulfilled because it is the only path for Colombia to overcome systemic human rights violations.