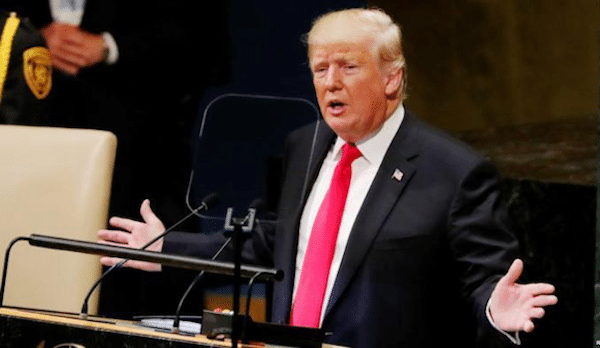 Trump became the menacing laughingstock of the United Nations this Tuesday morning as he began his speech to the global audience by claiming that “In less than two years, my administration has accomplished more than almost any administration in the history of our country.”

Trump announced that he honored the right of all nations present in the room to continue with their own customs, beliefs and traditions, but that in return,

We only ask that you honor our sovereignty.

He declared, “In the Middle East, our new approach is also yielding great strides and very historic change,” and even claimed that moving the U.S. Embassy in Israel to Jerusalem had “advanced” the U.S. aim for,

a future of peace and stability in the region, including peace between the Israelis and the Palestinians.

The U.S. president then ironically alleged that Iran “fueled and financed” the humanitarian crisis in Syria, before calling on “all nations to isolate Iran’s regime,” and announcing that further sanctions will be imposed.

Trump then went on to lash out against Venezuela. He described the Maduro government as a “repressive regime,” stating that “socialism has bankrupted the oil-rich nation and driven its people into abject poverty,” before calling on the international community to help in “the restoration of democracy in Venezuela.”

He also said that more than two million people have “fled the anguish inflicted by the socialist Maduro regime and its Cuban sponsors,” in what was his only direct reference to the island.

Despite his alleged concern for such people, he noted that.

The United States will not participate in the new Global Compact on Migration. Migration should not be governed by an international body unaccountable to our own citizens.”

As part of a speech that would appear to have been written during the Cold War, and contradicting his claims that the U.S. respects other nations’ sovereignty, Trump declared that,

Virtually everywhere socialism or communism has been tried, it has produced suffering, corruption, and decay. Socialism’s thirst for power leads to expansion, incursion, and oppression. All nations of the world should resist socialism and the misery that it brings to everyone.

He went on to announce additional sanctions against Venezuela,

Trump also reiterated the hegemonic, imperialist policy of his nation with respect to others, noting that the U.S. will only work with and help those it considers its “friends.”