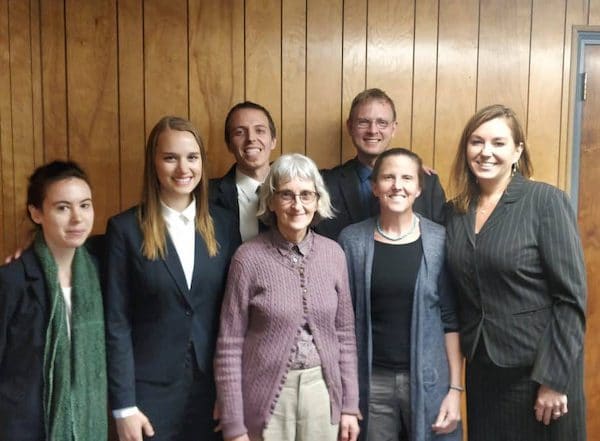 We are pleased to announce a victory in our Minnesota Valve Turner case! This trial was a roller coaster with many twists and turns, but all three defendants were acquitted of their charges this morning in court. They were acquitted, not on the necessity defense, but because the prosecution could not meet the burden of proof that they had committed a crime. Read below to find out more information, and follow along on our social media for updates as this story unfolds on a national scale!

The acquittal came a week after the climate activists were preparing to present a “climate necessity defense,” with expert testimony in areas including pipeline safety, climate science, climate policy and the efficacy of civil disobedience. The expert witnesses would have corroborated the defendants’ testimony that their actions were justified by the need to avert imminent climate catastrophe. However, in a stunning about-face last week, the court forbade all expert testimony related to climate change and civil disobedience, while still allowing safety testimony, and possibly testimony to direct, non-climate impacts of tar sands extraction and pipelines.

“The Judge found what I was about to tell the jury: that these defendants caused no damage to the two pipelines they closed. Indeed, they acted out of concern for communities that are harmed by fossil fuel pipelines, and the climate emergency,” said Dr. Anthony Ingraffea, an expert who authored the American Pipeline Institute pipeline safety guidelines.

“While I’m very glad that the court acknowledged that we did not damage the pipelines, I’m heartbroken that the jury didn’t get to hear our expert witnesses and their profoundly important warnings about the climate crisis,” said defendant Emily Johnston, 52, a Seattle resident and poet. “We are fast losing our window of opportunity to save ourselves and much of the beauty of this world. We turned those valves to disrupt the business-as-usual that we know is leading to catastrophe, and to send a strong message that might focus attention to the problem. We will continue to do that in every peaceful way we can; the stakes are far too high for us not to,” Johnston added.

With the acquittal, the case establishes two important legal precedents.

“Further, the defendants were acquitted of felony criminal damage to critical energy infrastructure and pipelines. In an attack on our democracy, this law, like others of its kind in 31 states, was pushed through the state legislature at the behest of the fossil fuel industry, which sought to increase the penalties against activists who dared to challenge the profiteering motives of some of the biggest corporations,” Regan said.

Dr. James Hansen was another of the expert witnesses scheduled to give testimony. “It’s great that the defendants were found not guilty, but we missed an opportunity to inform the public about the injustice of climate change. Now we need to go on offense against the real criminals, the government,” said Former NASA Chief Scientist Dr. Hansen.

The government, especially the Trump Administration, is guilty of not protecting the constitutional rights of young people. They should have a plan to phase down fossil fuel emissions, but instead they aid and abet the expansion of fossil fuel mining, which, if not stopped, will guarantee devastating consequences for young people.

“As older white people, we acknowledge that our white privilege may have resulted in better treatment in the legal system than activists of color often receive. That is why it is important for people of privilege to take bolder risk on behalf of the planet” said defendant Annette Klapstein. “There are lives in the balance, thousands of people are already dying from the effects of climate change and if we don’t put a stop to it, it will be millions within a few short years. It is morally unacceptable to me to stand idly by while even one life is sacrificed to the greedy oil company executives and their already rich shareholders and the banks who fund them can continue to make their even more obscene profits at the expense of all life on earth,” Klapstein added.