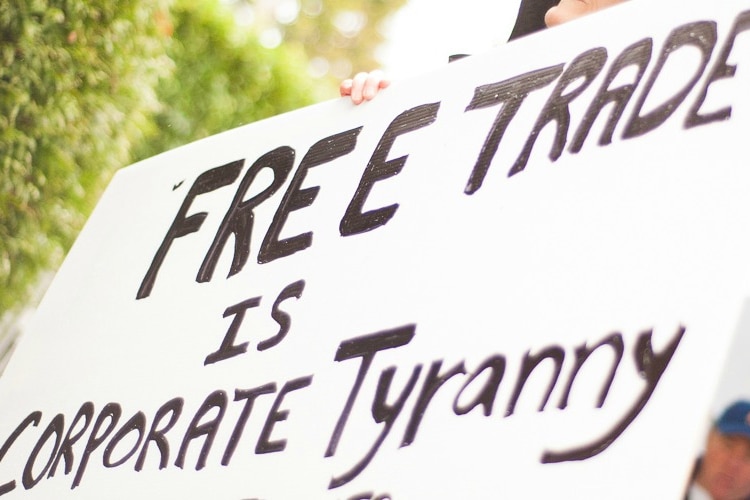 Voices questioning the claim that nations and the majority of their people stand to gain from global trade are growing louder. The one difference now is that the leading protagonist of protectionism is not a developing country, but global hegemon United States under Donald Trump. Free trade benefits big corporations with production facilities abroad, Trump argues, while harming those looking for a decent livelihood working in America. With time Trump has made clear that his words are not mere rhetoric, matching them with tariffs that have frightened European and North American allies and US corporations, besides troubling the likes of China and Japan. A nation that pushed for freer trade is now building economic walls along its borders. This turn in policy at the metropolitan core not only undermines the case for free trade among other nations, but revives arguments usually advanced by developing countries. The benefits of trade under capitalism, they hold, tend to be distributed unequally among nations. They sometimes fail to mention that at the national level as well the gains are asymmetrically distributed, favouring the more powerful.

Such arguments have traditionally been disputed by international institutions dominated by the developed countries, especially the institutional triumvirate—the IMF, World Bank and the WTO—that serves as the intellectual fountainhead for free trade advocacy. Not surprisingly, pushed by the scepticism over free trade that Trump has managed to kindle, the three have come together once more, to put together a “report” (released last month and titled Reinvigorating Trade and Inclusive Growth) extolling the virtues of a world without restrictions on the cross-border flows of goods and services. In the words of WTO Director General Roberto Azevedo (ironically a Brazilian whom experience must have taught otherwise): “Trade has been vital in lifting living standards and reducing poverty over the years but much more remains to be done. Many WTO members recognize that improvements are necessary in many areas of trade policy to keep up with the evolving needs of their economies and their people. This report is a welcome contribution to ongoing discussions on reinvigorating the trading system to the benefit of all.”

However, any discerning reader of the report would be disappointed by its pedestrian, unsubstantiated, set of assertions (as opposed to arguments). The report takes for granted the “benefits that trade and trade reform can provide for economic growth and inclusiveness”, and concludes that in recent times the world has been doing badly in terms of trade growth because “reform” or trade liberalisation has slowed. While reiterating the need to persist with “trade reform”, the report laments that this has been inadequately extended to  the increasingly important services area, and argues that opening up areas like e-commerce would lift living standards and reduce poverty, because medium and small enterprises would ostensibly benefit. No mention here of the domination of e-commerce by global giants like Amazon and Walmart and of the effects of their presence on the retail trade populated by small players. What is striking about the report is that there is not even an effort to revisit arguments about the distribution of gains from trade. The tone is that of a preacher who finds no need to establish what is right, of bearing the burden of proof.

Compare this with the much more conceptually rich and empirically grounded Trade and Development Report 2018 from UNCTAD, candidly sub-titled Power, Platforms and the Free Trade Delusion. The report notes that during the period stretching from the mid-1980s to the Global Financial Crisis of 2008, a substantial part of the increase in global trade was contributed by the developing world, especially East and Southeast Asia, which was also home to the faster growing economies. This was because, while liberalisation resulted in freer flows of capital and technology, labour was still largely immobile. Capital flowed to a few developing countries to benefit from access to a reserve of cheap labour, initially in the second-tier newly industrialising economies such as Malaysia and Thailand in Asia and then in China. As a result, these economies accounted for a growing share of the global production and export of manufactures. South-South trade also increased because of the growing importance of global value chains (GVCs), with individual developing countries integrated as partial producers of goods, importing inputs and capital good and exporting semi-finished products. Thus, in 2016 East Asia accounted for 7 out of every 10 dollars of manufactures exported by the developing countries. “Asia alone accounted for about 88 per cent of developing country gross exports of manufactures to the world, and for 93 per cent of South–South trade in manufactures, while East Asia alone accounted for 72 per cent of both.”

Moreover, during the 1990s and after, much of the export of manufactures came from one country, China. This had its impact on China’s contribution to output growth as well. Between 1990 and 2016 the share of the BRICS in global output rose from 5.4 to 22.2 per cent. But if China is removed from this group, the remaining (or the RIBS) saw their share increase from 3.7 to only 7,4 per cent. China stands out as an exception in other senses as well. Between 1995 and 2014 most developing countries saw a fall in the share of domestic value added in the value of their manufactured exports, with the fall in the case of India, South Africa and South Korea being as much as 13, 12 and 6 per cent. Integrated into a chain involving imports, processing and exports, less of the value of the exported product was being retained as income generated at home. On the other hand, the value added share accruing to China in its exports of manufactures rose by 12 per cent.

The UNCTAD attributes this striking difference to the active industrial policies geared to enhancing domestic value added adopted by China. It is well known that despite its decision to join the WTO, China has managed to ensure a high degree of state control and management of its export trajectory, leading to the criticisms of “unfair trade” currently being levelled against the country by the US and its European allies. But as the developed countries recognised in their industrial infancy, and Trump reiterates now, the idea that free trade policies deliver more gains to a country, as argued by the triumvirate, is not supported by the evidence. Rather, what seems crucial is the adoption of an industrial policy explicitly aimed at neutralising, at least partially, the inequalising effects of participation in global trade through integration in GVCs.

Such intervention can also make a difference to the domestic distribution of the benefits of growth. Overall the evidence is that, even to the extent that world trade grows, the benefits of that growth accrue to a few global corporations and their junior “business partners” in developing countries. UNCTAD’s estimates relating to 2014 show that, on average across countries, the top 1 per cent of exporting firms accounted for 57 per cent of the export of goods (excluding oil and services), the top 5 per cent for more than 80 per cent, and the top 25 per cent for almost all of a country’s exports. Associated with this was a redistribution of incomes derived in favour of capital and away from labour. Information collated from the World Input-Output Database shows that globally the share of capital in exported value  added in manufacturing GVCs rose from 44.8 per cent in 2000 to 47.8 in 2014. In India’s case the corresponding figures were 56.6 per cent and 60.6 per cent. In China, on the other hand, the share of labour rose from 43 to 50.4 per cent, while that of capital fell from 57 to 49.6 per cent.

It is in this background that the UNCTAD report examines whether, as suggested by the report from the triumvirate, the growing importance of services, especially those linked to or enabled by digital technologies, offers new opportunities to developing countries, including India. Unfortunately, here too, the combination of deep pockets and network effects (in which all users of a network gain when the number of users increases) favours “winner-takes-all” outcomes, leading to the dominance of a few giants, whether in product software or in areas like e-commerce and digital payments. Moreover, the access to data, mined while offering digital consumers free services, has resulted in a burgeoning business involving the use of such data for commercial purposes. As a result, ICT giants now feature among the top 100 transnational firms, and by 2015, 17 of them accounted for a quarter of the market capitalization of the top 100 and close to a fifth of their profits. So here too free trade benefits a few. This calls for three kinds of policies. Anti-trust measures that curb monopoly and prevent restrictive trade practices. Privacy laws that require informed consent before collecting and using data on consumers. And measures such as data localisation and regulated transfer that prevent the monopolisation of data by transnational firms and local monopolies. In sum, policies similar to that needed for successful late industrialisation are required in digital services as well.

The evidence-based arguments presented in the UNCTAD report are telling. They reveal why the votaries of free trade as a panacea for underdevelopment are victims of delusion. They also help understand why the assertions of the free trade triumvirate amount to just hype not justified by facts.