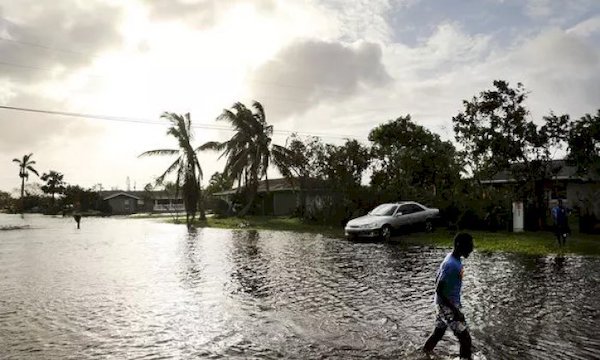 Only a revolution can save us. That’s the take home message of the latest report from the UN Intergovernmental Panel on Climate Change (IPCC), released on 8 October.

Based on emissions reduction commitments made under the 2015 Paris agreement, the world is on track for an average temperature increase of 3 degrees Celsius. Those commitments, however, are hardly worth the paper they’re written on.

Australia has promised to reduce its emissions to 26-28 percent below 2005 levels by 2030. Yet since signing the agreement, emissions have continued to rise. The government is headed by a man whose passion for coal led him to bring a lump of the stuff into parliament–waving it in the air and passing it around to the delight of his Coalition colleagues.

Donald Trump has pulled the U.S. out of the agreement.

Even countries that have voiced support for the Paris agreement continue to expand their own fossil fuel industries. The British government is pushing to allow gas fracking. Norway, Western Europe’s largest oil and gas producer, recently defeated a legal bid to block exploration of its Arctic territories for new resources to exploit.

Failure to change course rapidly will spell disaster for hundreds of millions of people. The destruction of the Great Barrier Reef, and all other coral reefs around the world, will come first. These natural treasures, on which 500 million people depend for their livelihoods, may be gone by the middle of the century.

Under a 3 degree warming scenario, large areas of the world will be rendered uninhabitable. Deserts will expand into vital agricultural land. Sea level rises, which will continue for centuries as the polar ice caps melt, will force tens of millions to vacate coastal towns and cities.

Tens of millions more will be turned into refugees by severe food shortages caused by declining agricultural yields, the destruction of fisheries and so on. Already, with 68.5 million displaced people in the world, countries everywhere are transforming themselves into authoritarian, anti-refugee fortresses. In an era of climate migration, this tendency will intensify.

The world’s imperialist powers, including those, like Australia and the U.S., that are doing nothing to address climate change, are ensuring that their militaries are “climate change ready”. We’re entering an era of increasing geopolitical tensions caused by competition over scarce natural resources–an era of climate wars.

The global average temperature is already 1 degree above pre-industrial levels. We’re already seeing an increase in the frequency and intensity of extreme weather and natural disasters such as heat waves, droughts, cyclones, floods and fires. At 3 degrees warmer, such events will be a “new normal”–with death and destruction visited on communities with increasing regularity.

All this assumes that the most apocalyptic scenarios won’t eventuate. These include, for example, the rapid release of methane and other greenhouse gases trapped in the Arctic permafrost, which could cause runaway temperature rises well beyond current forecasts.

The IPCC report was authored by 91 scientists from 40 countries, referenced more than 6,000 scientific works, and was reviewed by 42,000 experts and government representatives from around the world. If anything, it’s highly conservative.

Commissioned in 2015, its aim is merely to outline the benefits and necessary steps for achieving the Paris agreement’s stated goal of limiting the rise in global temperatures to 1.5 degrees.

When the agreement was made, the scientific consensus was that 2 degrees was the “safe limit” beyond which we risk being propelled into dangerous runaway warming. The new report makes it clear that even 2 degrees is too great a risk.

The difference between 1.5 degrees of warming and 2 degrees is significant. As the report outlines, for example, a 1.5 degree warmer world would likely lose 70-80 percent of its coral reefs; at 2 degrees warmer, more than 99 percent of coral would die.

Perhaps the most striking thing about the report, however, is its description of the steps necessary for the world to have a chance of limiting warming to 1.5 degrees. This would require, the authors argue, “rapid, far-reaching and unprecedented changes in all aspects of society…Global net human-caused emissions of carbon dioxide would need to fall by about 45 percent from 2010 levels by 2030, reaching ‘net zero’ around 2050”.

Achieving this would involve an immediate and sharp turn from the current emissions trajectory–one that the world’s major emitters show no sign of being prepared to undertake.

The Australian government is determined to continue with its criminal inaction. Prime minister Scott Morrison told Sydney’s radio 2GB: “We are not held to any of the [IPCC recommendations], and nor are we bound by them”. Deputy prime minister Michael McCormack defended the coal industry, arguing it would continue to play an important role in Australia’s economy for decades to come. He says the government shouldn’t change its policy “just because somebody might suggest that some sort of report is the way we need to follow and everything that we should do [sic]”.

Environment minister Melissa Price made perhaps the most bizarre comment–that it would be “irresponsible” for Australia to commit to phasing out coal by 2050. “I just don’t know how you can say by 2050 you are not going to have technology, good clean technology, when it comes to coal”, she said.

The government’s response confirms what most already know: that they run the country not on behalf of all its people, but in the service of the fossil fuel barons and associated capitalists and investors, who are more than prepared to watch the world burn if it means a few extra billions in profits.

If there’s one thing the past three decades of inaction on climate change has shown, it’s that we can’t rely on governments–in Australia’s case, either of the Liberal or Labor variety–to heed the warnings of scientists and take the steps necessary to halt our slide towards climate catastrophe. None of them are prepared to break with the logic of capitalism, in which the competitive drive to profit rules, and anything that gets in the way of that is to be shunned.

The time for tinkering around the edges is long gone. To achieve the rapid emissions reductions called for in the IPCC report requires a total reshaping of society and the economy. This can’t happen under the auspices of free market capitalism.

The environment movement would do well to reflect on this point. Over the past few decades, it’s poured its energies into lobbying governments and big business–trying to convince them to curb emissions on the basis of scientific arguments about the consequences for the planet if they fail to do so.

This strategy has been a disaster. It’s not that the global capitalist elite and their political servants don’t understand the consequences of their actions. It’s that they know a serious effort to address climate change will put their wealth, power and privileges at risk.

The CDP Carbon Majors Report, released in 2017, found that just 100 companies are responsible for more than 70 percent of global greenhouse gas emissions since 1988. These companies are among the most profitable and politically influential in the world. No amount of rational argument will stop them from continuing their social and environmental vandalism.

The Paris agreement was welcomed by mainstream environment groups as a major breakthrough. The Australian Conservation Foundation, for instance, said it “signals the end of the fossil fuel age and will turbo charge the clean energy revolution already underway”. To continue with such illusions now would be fatal. The IPCC report, just like the Paris agreement, will change nothing without mass, determined action from all who want to save us from the looming catastrophe.

In the 17th century, Galileo got into hot water with the Roman Catholic Inquisition for promoting the “fable” that the earth revolved around the sun. Today, the persecution of such figures is rightly regarded as a last gasp of mediaeval superstition protecting the privileges of the religious elite against the encroachments of modern science.

The capitalist ruling class’s refusal to act on the observations of contemporary climate science is more regressive and damaging than anything the Inquisition could muster. The world could have survived a few more centuries under the boot of religious despotism. A few more centuries under the despotism of free market capitalism will leave it damaged probably beyond repair.

Our situation is aptly summed up by Nathan Robison, editor of U.S. magazine Current Affairs:

There is a famous old left phrase, ‘socialism or barbarism’: there is no choice but to find a way to stop capitalism’s destructive logic, because if left unchecked it will create catastrophe.