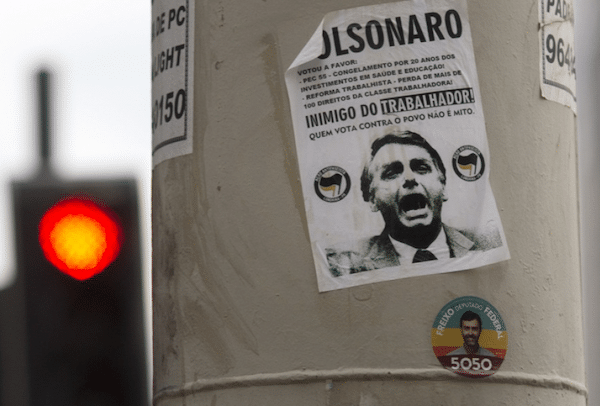 In a video that surfaced this weekend Mr Bolsanoro’s son Eduardo warned of “dire consequences” for Brazil’s highest election authority should it contest his candidacy.

The election campaign has been marred by escalating violence against opponents of Mr Bolsonaro and accusations have been raised over his use of social-media platforms to spread false information.

It is alleged that the former army captain has received huge donations from big business to run the smear campaign against his opponent in the second-round run-off, Workers Party (PT) candidate Fernando Haddad.

Such action is in breach of Article 222 of Brazil’s electoral code, which states:

Voting is also null and void when it is vitiated by falsehood, fraud, coercion.

A petition of more than 160,000 signatures has been accepted by the TSE, which is due to debate and rule on Mr Bolsonaro’s eligibility to stand in Sunday’s poll.

The far-right candidate is accused by the petitioners of creating “a climate of intolerance and violence in our country” after hundreds of attacks by alleged supporters, including an incident in which thugs carved a swastika on a woman’s stomach for wearing an anti-Bolsonaro T-shirt, and the stabbing to death of a prominent PT activist.

TSE president Rosa Webster refused to be intimidated by the threat from the Bolsonaro camp, praising the strength of the country’s institutions. She said: “All the judges honour their toga and would not allow themselves to be shaken.”

Mr Bolsonaro was given five days after the acceptance of the petition to appear before the TSE to present his case. If the court rules against him, Mr Bolsanaro could be barred from politics for eight years.

Investigations will focus on businessman Luciano Hang, who is alleged to be involved in the smear operation.

The left-wing coalition backing Mr Haddad has also requested the seizure of accounting records and banking and financial data of companies it accuses of being involved in the illegal operation, including Quick Mobile, Yacows, Croc and SMS Market.