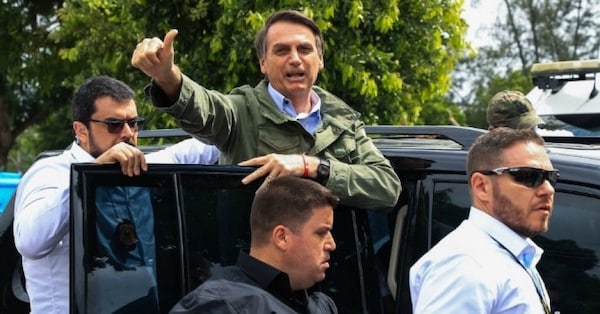 As Brazilian women, the LGBTQ community, workers, and people of color reacted with horror to the election of fascist Jair Bolsonaro to the presidency on Sunday after a campaign dripping in bigotry and militarism, Western corporate interests and the business press could hardly contain their glee over the victory of the hard-right former paratrooper who has promised to further pry open Brazilian markets to foreign investment, slash corporate taxes, and privatize the nation’s public services.

While highlighting Bolsonaro’s “homophobic, racist, and misogynist statements,” the Canadian Broadcasting Corporation (CBC) gushed that his win over Workers’ Party candidate Fernando Haddad “could mean fresh opportunities for Canadian companies looking to invest in the resource-rich country” thanks to his strong commitment to “open markets.”

“It could be a good time to be a mining investor in Brazil,” declared Anna Prusa, a former U.S. State Department official who researches Brazil for the Wilson Center, a Washington, D.C.-based firm.

Well, at least this is honest. Big business sees the victory of Brazilian fascism as a massive investment opportunity. https://t.co/P995fa9xAK

Congrats to the @CBC for their framing of the #BrazilElections. Sure, a stone-cold racist, homophobic authoritarian won, and people could literally be in physical danger as a result, but this could be really good for Canadian business. https://t.co/QYirDBCVfQ

Capitalism only asks whether fascism is profitable. https://t.co/AoLR0IbZw5

Canadian business interests are hardly the only ones well-positioned to profit immensely from Bolsonaro’s iron-fisted regime.

As The Intercept reported last week, American business elites were positively giddy at the prospect of a Bolsonaro victory, which one executive said would be a “bullish opportunity for us.”

Enthused by Bolsonaro’s selection of right-wing University of Chicago-trained financier Paulo Guedes to craft his economic agenda, investors are “more than happy to overlook the authoritarian impulses and violent promises,” The Intercept‘s Lee Fang and Zaid Jilani note.

“Guedes has promised to sell off state assets, cut the public pension system, revise the tax code, and deregulate the economy,” Fang and Jilani reported. “Another Bolsonaro adviser, Nabhan Garcia, told Reuters that the administration would slash fines for farmers who violate environmental rules in sensitive areas like the Amazon.”

Corporate excitement over Bolsonaro’s ascent to power—made possible in large part by the imprisonment of Brazil’s former president and most popular politician, Lula da Silva, on corruption charges that have been denounced as highly questionable—began when the far-right lawmaker prevailed in the first round of elections earlier this month.

“Brazil stocks outshined the rest of the world” ahead of Sunday’s election, CNBC reported.

Following Bolsonaro’s 10-point victory, stocks continued to skyrocket as investors cheered the rise of an authoritarian who has promised to gut the public sector and “give carte blanche for the police to kill.”

Brazil lurches to the far right as ex army captain Jair Bolsonaro is elected president.
Investors like it – Tokyo-listed Brazilian ETFs rise as much as 15%. https://t.co/Y0EHI1dX58 pic.twitter.com/Izy2EWYvvY

Brazil’s next president pledged to trim the deficit, pay down debt and reduce the size of government after results showed him cruising to victory over Fernando Haddad of the left-wing Workers’ Party. That helped Brazilian assets extend gains Monday, with the currency adding as much as 1.5 percent and Ibovespa stock futures climbing 4 percent in early trading. An American depository receipt of state-controlled oil producer Petroleo Brasileiro SA jumped 7.1 percent in pre-market hours.